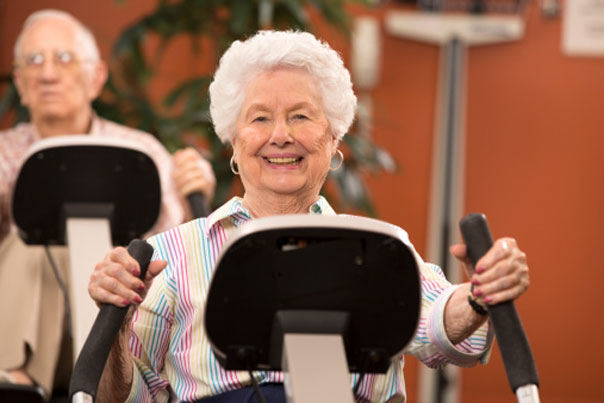 Regular exercise can significantly cut risk for fracture for older women. Find out more, plus other tips to build stronger bones

Older women with thinning bones who exercise regularly can increase their balance, stability, and walking speed — and cut their risk for fracture by 32 per cent, a study finds.

For the study, published in the Archives of Internal Medicine, researchers from Finland looked at older women with osteopenia who participated in a 30-month period of exercise intervention.

Osteopenia is a condition characterized by a loss of bone density but not enough to constitute osteoporosis.

The study found that just 20 minutes of at-home exercise daily, supplemented with some weekly training, led to better performance on measures of strength and stability. This means less risk of falling, and quite possibly, a longer life.

“Falls are responsible for at least 90 percent of all hip fractures,” study leader Raija Korpelainen of Oulu Deaconess Institute, Oulu, Finland, and his colleagues wrote.

“Hip fractures place the greatest demands on resources and have the greatest effect on patients because they are associated with high mortality rates and increased morbidity.”

Researchers found that the benefits from exercise continued for two years after the program ended, with exercisers also being at lower risk of sustaining hip fractures or dying during follow-up.

The findings are important because even small declines in strength and stability can significantly impact a person’s ability to perform activities of daily living, such as getting out of bed. “Many elderly people live just beyond the threshold of the capacity needed for such tasks,” researchers told Reuters Health. “These results suggest that these women may have had an increase in performance capacity reserve large enough to prevent loss of independence and future fractures.”

Regular daily exercise should be recommended to older women with osteopenia, researchers concluded.

Osteopenia is a condition in which bone density is below normal and may lead to osteoporosis, a disease that is characterized by low bone mass and deterioration of bone tissue. This leads to an increased risk for hip fractures and other bone breaks that can contribute to premature death. Osteoporosis, which affects approximately 2 million Canadians, is often referred to as “the silent thief” because bone loss occurs without symptoms.

Since bone mineral loss can begin as early as your 30s, it’s never too early — or too late — to take steps to keep your bones strong and healthy. In addition to getting regular exercise, certain lifestyle changes such as incorporating adequate calcium and vitamin D into your diet can help to protect your bones, no matter what age you are.

Get your Calcium
Osteoporosis Canada recommends a daily calcium intake of 1200 mg for people over 50. While milk and dairy products such as yogurt and cheese continue to be an important source of calcium, foods beyond the dairy aisle can also provide valuable calcium.

Try adding almonds, broccoli, bok choy, cooked kale, canned salmon and sardines (with the bones), figs, oats and soy products such as tofu. Calcium can also be found in dried beans and legumes. A variety of calcium-enriched foods such as orange juice and soymilk are also readily available.

Get your Vitamin D
Vitamin D plays a vital role in ensuring the body can absorb calcium from your diet and/or supplements. However, vitamin D deficiency continues to be a serious concern in Canada and around the world, and some health agencies have begun to reevaluate their daily recommendations for vitamin D consumption. Osteoporosis Canada, for example, announced recently that people over 50 should take between 800 International units to 2,000 IU daily to help prevent osteoporosis, which is more than double the previous guideline. (Osteoporosis Canada is the third major public health group to say Canadians need more vitamin D, joining the Canadian Cancer Society and the Canadian Pediatric Society. For more information, see The Zoomer Report: More Vitamin D for Osteoporosis.)

The only natural foods containing vitamin D are egg yolk, liver and fatty fish, such as salmon, tuna, mackerel and sardines. It is also found in fortified foods such as some cereals, margarine and beverages such as milk and soymilk. (See Get your Vitamin D)

Get physical
As mentioned, regular exercise, especially weight-bearing activities such as walking or jogging, is an important part of building and maintaining strong bones. And to maintain bone health (as opposed to reaping full cardiovascular benefits) you don’t need that much — experts say that 20 minutes of walking 3-4 times a week should do it. Strength-training activities are also important for improving muscle strength and coordination. (For more, see The silent thief .)

And keep in mind that while exercise throughout life is important, you can increase your bone density at any age.

Get rid of the smoking habit
Smoking can increase bone loss. This can happen by possibly decreasing the amount of estrogen that a woman’s body makes and by reducing the absorption of calcium in the intestine.

Ask about a bone mineral density test
Doctors use a test called a Bone Mineral Density (BMD) scan to help assess whether a person has osteoporosis. In addition to BMD test results, a physician considers risk factors such as age, gender, fracture history, family history and steroid use to determine one’s 10-year fracture risk.

While, in general, people over 65 are recommended to have a BMD scan, if you are at higher risk or have a family history of the disease, you should have the test at around 50.

— The disease affects one in four women and one in eight men over the age of 50. It can, however, strike at any age.

— Seven in 10 fractures in those over the age of 45 are due to this disease.

— Osteoporosis affects as many as two million Canadians, and costs approximately $1.3 billion per year to Health Canada.