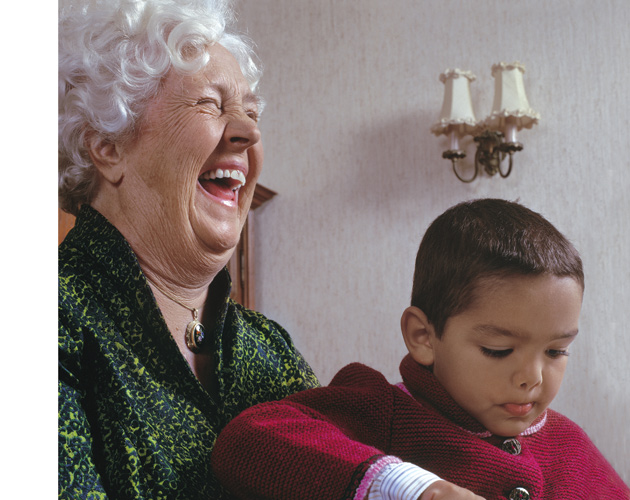 YOU’D THINK THE WORST TIME to rattle off a punchline would be the moment you inform someone that they’re going to die. Well, you’d be wrong. Just ask Terry Jones, member of famed British comedy troupe, Monty Python, who relates a tale about the time his good friend, Dr. Robert Buckman, had to tell a man and wife that the latter had terminal cancer.

“And the husband leaned forward and whispered, ‘But doctor, what about sex?’” Jones says. “And Rob thought for a moment and said, ‘Well, hadn’t we better wait until your wife leaves the room?’”

Jones’ laughter serves as an exclamation point on his belief in the power of humour. “[It] made them all laugh and … they got on much better together. So my judgment is if something’s funny, then it’s funny. And if it’s funny, that’s why you should do it.”

If laughter is indeed the best medicine, then Jones is a healer of the highest order. At age 70, he’s helped launch MyHealthTips.com, a website that entertains, informs and provides lifestyle insight for people living with chronic medical conditions including Type 2 diabetes, high blood pressure and asthma. Jones portrays a variety of characters in video sketches designed to educate through humour.

“I cured my diabetes by eating wallpaper,” a grandmotherly character played by Jones tells a friend in a video that warns against the dangers of following false medical information. “Oh really? Do you cook it?” the friend asks. “No. I ate it straight off the wall.”

“What I hope happens,” Jones explains, “is that the comedy makes [the information] more memorable.” So the next time you go to put salt on your food, “because you laughed at it … you’ll remember the bit [and put the salt down].”

Of course, playing for laughs is central to most projects Jones takes on. Aside from his Python and other entertainment endeavours, there’s his academic work: history books and papers in which he revels in adding a dash of comedy. “Why do people get terribly po-faced about history? People laughed in history,” Jones says, dumbfounded. “I just think humour’s a very good way to bring people in.”

The sad irony of Jones’ online endeavour, however, is that Dr. Robert Buckman, the man who began the website MyHealthTips.com, never lived to see it to fruition. Jones met Dr. Buckman in the 1970s during a charity show for Amnesty International. Jones was already a Python, while Dr. Buckman moonlighted as a comedian on BBC television. In October 2011, the 63-year-old passed away on a flight home to Toronto from England after filming videos for the new website.

“He fell asleep on the plane and died quite unexpectedly,” Jones says. “It was just a big shock. I think it was a shock to him, actually.”

Jones’ dry wit in the face of his friend’s passing underscores another hallmark of his comedic sensibilities – the ability to heal through humour. A laugh cuts the tension when discussing an autoimmune disease Buckman suffered from in the early 1980s: “He made a film about his death for the BBC. In fact, he didn’t die, so they had to change the ending.”

And then there’s the trailer for the recently released A Liar’s Autobiography – The Untrue Story of Monty Python’s Graham Chapman, a film in which Jones took part that boasts the appearance of “five Pythons, including the dead one.” And there are Jones’ own health issues, from gall bladder removal to hip resurfacings to a 2006 battle with bowel cancer, which he notes he “couldn’t take seriously” until a nurse suggested he might need a colostomy bag.

“But instead of having a regular rectum, I’ve got this long, wiggly thing and so [the cancer] was farther away than they thought,” Jones laughs. “So thank God for having an odd rectum.”

Of course, laughter has its limits. “I’m not sure that it cures cancer,” Jones concedes. Still, he isn’t the only one championing the benefits of a hearty chuckle. Earlier this year, Dr. Geordie Fallis, chief of family practice at Toronto East General Hospital (where he’s known as the hospital’s “Patch Adams”), released a self-narrated audiobook titled From Testicles to Timbuktu: An Eclectic Look at Love, Life and Laughter From the Other Side of the Stethoscope, which recalls humorous tales and anecdotes culled from his own experiences in medicine.

“I believe that humour … helps with the cathartic release of pent-up emotions,” Dr. Fallis said on Global TV’s The Morning Show. “What we know is that when people laugh they feel better.”

That’s, in part, what Jones is counting on. He’d like to team with British doctor-cum-comedian Phil Hammond in future website videos, to help others discover how to live a healthy and informed life while enjoying a few laughs.

“We wanted to carry it on out of respect for Rob, really, because he wanted to carry on with it,” Jones admits,before his trademark grin creeps across his face. “And there’s an endless amount of chronic diseases out there.”