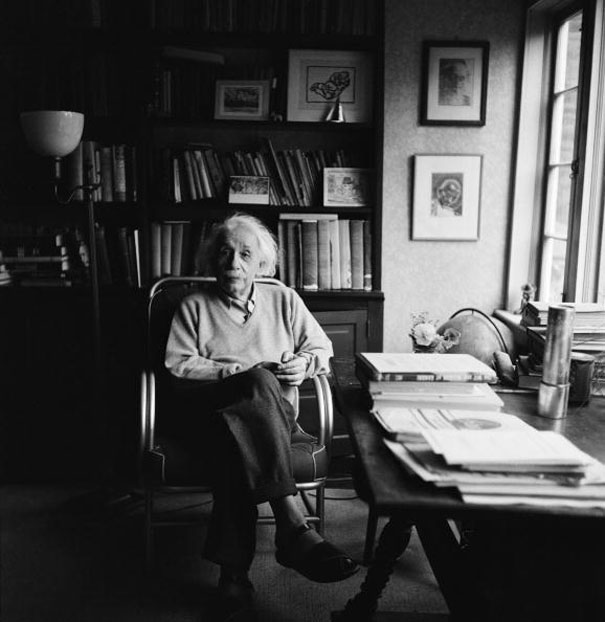 German-born American physicist Albert Einstein (1879 - 1955) in his study at Princeton, New Jersey, where he was professor at the Institute for Advanced Studies, 1951. Photo by Ernst Haas/Getty Images.

Here’s a headline about study results in a scientific journal that merits printing on t-shirts and bumper stickers:

“Older brains slow due to greater experience, rather than cognitive decline.”

That’s the headline about research published in the journal Topics in Cognitive Science.

Although it’s long been thought that age leads to a steady deterioration of brain function, new research shows that older brains may take longer to process information because they have ever increasing amounts of knowledge to process.

This has often been misidentified as declining capacity, says study author Dr. Michael Ramscar of the University of Tuebingen in Germany.

The study takes a critical look at the measures that are usually thought to show that our cognitive abilities decline across adulthood.

Instead of finding evidence of decline, the team discovered that most standard cognitive measures are flawed, confusing increased knowledge for declining capacity.

Dr. Ramscar’s team used computers, programmed to act as though they were humans, to read a certain amount each day, learning new things along the way. When the researchers let a computer ‘read’ a limited amount, its performance on cognitive tests resembled that of a young adult.

However, if the same computer was exposed to data which represented a lifetime of experiences its performance looked like that of an older adult. Often it was slower, not because its processing capacity had declined, but because increased “experience” had caused the computer’s database to grow, giving it more data to process, and that processing takes time.

“What does this finding mean for our understanding of our ageing minds, for example older adults’ increased difficulties with word recall? These are traditionally thought to reveal how our memory for words deteriorates with age, but Big Data adds a twist to this idea,” said Dr. Ramscar. “Technology now allows researchers to make quantitative estimates about the number of words an adult can be expected to learn across a lifetime, enabling the team to separate the challenge that increasing knowledge poses to memory from the actual performance of memory itself.”

“Imagine someone who knows two people’s birthdays and can recall them almost perfectly. Would you really want to say that person has a better memory than a person who knows the birthdays of 2000 people, but can ‘only’ match the right person to the right birthday nine times out of ten?” asks Dr. Ramscar.

“It is time we rethink what we mean by the aging mind before our false assumptions result in decisions and policies that marginalize the old or waste precious public resources to remediate problems that do not exist,” said the editors of Topics in Cognitive Science.