Dan Aykroyd and Friends Unveil Stand Up to Cancer Canada 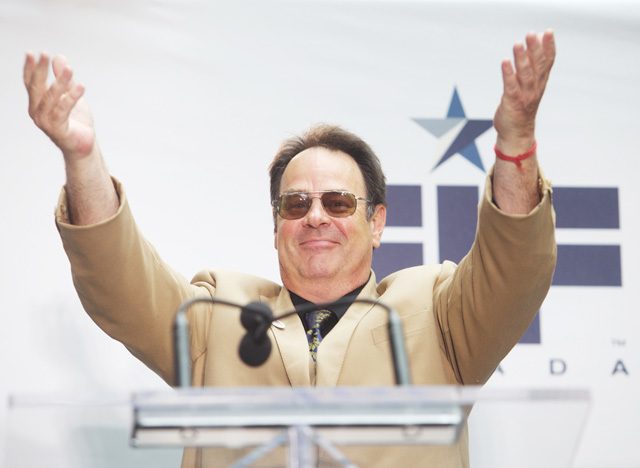 Dan Aykroyd imploring Canadians to Stand Up to Cancer this morning at the MaRS Centre in downtown Toronto. Photo: Tobin Grimshaw

“This is a fight! It’s a battle, it’s a war!” Canadian actor Dan Aykroyd boomed from the lectern like a five-star general at Toronto’s MaRS Centre.

He gestured to the rows of scientists and researchers lining the Centre’s atrium. “Here are your soldiers – they need weapons, equipment, they need information, they need intelligence, and they need funding! And this is a fight that we now take to the airwaves and beyond. We’re all touched by this disease…And by taking it on together we’re going to beat it one day!”

It was a rousing call-to-action to accompany the groundbreaking announcement that four of Canada’s major broadcasters will join their American counterparts in a live, simultaneous airing of the Stand Up to Cancer benefit, a star-studded fundraiser that will emanate, in part, from Canada, for the first time.

Founded in 2008, the annual American Stand up to Cancer broadcasts boast A-list stars and performers. The Canuck arm of the star-studded benefit, Stand Up to Cancer Canada, is headed by the charity EIF Canada. Their portion of the September 5th event – geared specifically toward issues surrounding cancer and Canadians – will air live from Toronto (coinciding with the Toronto International Film Festival) on CBC, CTV, City and Global.

“You don’t see the studio and the television networks working together very often in the U.S., Canada, or anywhere else in the free world,” Modern Family’s Jesse Tyler Ferguson said during this morning’s festivities, adding, “we’re very fortunate and grateful … [that] we’re able to share the message of [ours] across this great country with every single Canadian touched by cancer.”

According to EIF Canada, “two out of five Canadians are expected to develop cancer in their lifetimes. Every hour of every day, an estimated 22 Canadians will be diagnosed with some type of cancer, and nine people will die from the disease.” They announced that the funds raised from Stand Up to Cancer Canada will benefit the, “the creation of collaborative research teams, as well as education and awareness programs conducted in Canada,” which includes, “cancer prevention and groundbreaking translational research, accelerating the pace at which new therapies get to patients, bringing together scientists from different disciplines and institutions to collaborate on Dream Teams.”

Ferguson noted that his husband, Justin Makita, endured a childhood battle with the disease, while another celebrity guest – Desperate Housewives star Kyle MacLachlan – lost both his parents to cancer.

“It’s a loss that I feel every day of my life,” MacLachlan admitted, noting he hopes his young son will grow up in a world where cancer is a distant memory. “To the researchers, the doctors, the advocates, the people in the fight – you are our rock stars.”

Many of those rock stars were in attendance, including Dr. Michael Taylor, a paediatric neurosurgeon at the Hospital for Sick Children, who spelled out his dream for the future of cancer care.

“We know cancer’s always going to be a problem, but we want to turn it into a treatable problem where we can return people to their families and to their regular lives. And I hope you all share that dream with us.”

Aykroyd echoed the sentiments of most in attendance, hailing the union of the entertainment world and the scientific community, “to support this accelerated onslaught that’s being planned here. And that hopefully will someday end cancer’s long reign as the king of killers.”