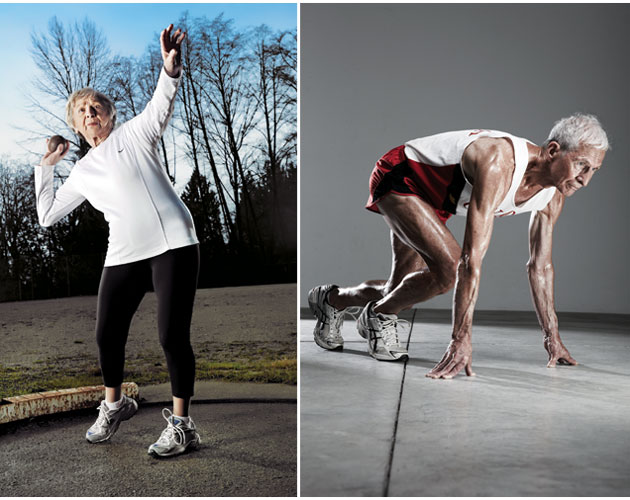 Jayne MacAulay considers age and athletes in the longevity equation.

Olga Kotelko died after this piece was published in the June issue of Zoomer magazine. Read more about that here.

Most 90-plus women don’t jump as far as possible across a pit of sand, show up in gym gear on NBC’s Today show or have photographers in their faces at international track meets. But then they’re not Olga Kotelko, who turned 95 in early March and gleefully moved up an age category (95 to 99) to ace eight new world records at the World Masters Athletics Indoor Championships in Budapest, Hungary. (Masters games athletes compete in five-year age categories that start at age 35.)

Kotelko and her ilk challenge assumptions that chronologically old people can’t be high-level athletes. In fact, this five-foot-tall great-grandmother from West Vancouver, B.C., is considered one of the world’s greatest, chewing through world records after taking up track and field athletics at the age of 77.

Baseball had been the game of choice growing up with her 10 siblings on the family farm in Saskatchewan, so at 70, she chose to play slo-pitch. Figuring the game’s throwing and running would transfer to athletics, she joined a local track club seven years later, where a competent coach helped her avoid injury while building strength and endurance. Her 11 events – hammer throw, shot put, weight, discus and javelin, 100-, 200- and 400-metre runs, long jump, high jump and triple jump – demand different skills, which hone balance, strength, agility, aerobic fitness and keep her brain sharp, too.

Oddly, a late start or long gap in a sporting career isn’t unusual in these high-performance elderly athletes. Once they find a sport that suits them they go all in, investing time and energy for a payback in the confidence-boosting feeling of a fitter body, the fun of competing – and shattered records.

Earl Fee, 85, the Mississauga, Ont., middle distance runner known in the Masters world as The Great Earl, competed in university, but took a 33-year break before starting again at age 57 with his young sons. Turning 85 just before the Budapest event, he set a record in the 800-metre race for 85- to 90-year-old men. So passionate is he about running that he’s written two books: The Complete Guide to Running and 100 Years Young: The Natural Way. He stretches twice daily and uses visualization and assertive statements to boost performance.

“The mind is the weaker link,” he says. “I started realizing when you’re ready to give up, the body can go much farther. Sometimes the feeling to stop just lasts a little while. If you concentrate, it goes away.” Kotelko’s version of this theme is found on her  ww.olgakotelko.com home page.

Data is scarce on older competitors, but scientists at McGill’s department of kinesiology and physical education in Montreal have begun investigating. They’re testing at least 20 top international-level athletes over 75 (when muscles tend to shrink), including Kotelko, Fee, 83-year-old Ed Whitlock of Milton, Ont., and Kotelko’s protégé, Christa Bortignon, 76, from West Vancouver, to contrast with non-athletes of the same age. (Kotelko reports her muscles turned out to be comparable to a 60-year-old and her brain to someone in her 50s.) Researchers may tap into their fountain of youth or, by discovering how their muscles stay intact, find a key to help people suffering from neuromuscular diseases.

Is Kotelko’s activity stretching her lifespan?

“Yes!” she answers emphatically. In fact, the young-at-heart athlete asserts, “I’m not old. I don’t know how to behave as old. It’s so different from what I am doing now.”

Kotelko has already been the subject of a book – What Makes Olga Run? (Random House of Canada) – by Bruce Grierson. This past spring, Kotelko and writer Roxanne Davies published Olga: The O.K. Way to a Healthy, Happy Life (Friesen Press). Among her secrets: reflexology on hands and feet and a methodical 90-minute “O.K.” program of self-massage done if she wakes during the night. Three times a week, she’s in the pool using weights in Aquafit and at the gym when Vancouver’s weather keeps her from the track. The book features 50 pages of illustrated exercises, including one she invented that uses sponge balls for keeping hands pain-free.

“I love meeting new people and of course, meeting with the friends I’ve made during the 17 years I’ve been competing,” she confesses. “I like the ambience of the championships. In Budapest, this 97-year-old, the oldest man, presented me (the oldest woman) with a bouquet of flowers. It was so touching.” Then she put them aside and took a flying leap – actually four triple jumps – each a world record, one after the other.