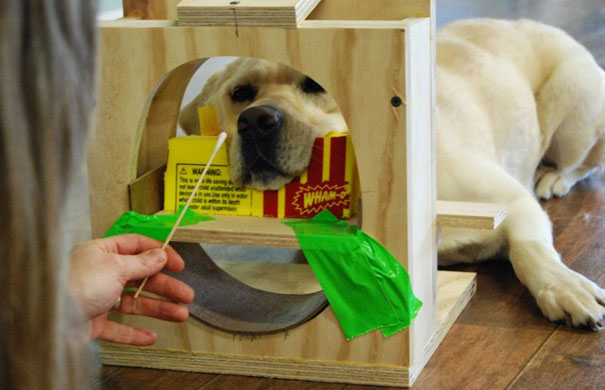 Your scent may linger like perfume in your dog’s brain. That’s the conclusion of the first brain-imaging study of dogs responding to biological odors.

“It’s one thing when you come home and your dog sees you and jumps on you and licks you and knows that good things are about to happen,” says Gregory Berns, Emory University scientist.

“In our experiment, the scent donors were not physically present. That means the canine brain responses were being triggered by something distant in space and time. It shows that dogs’ brains have these mental representations of us that persist when we’re not there.”

When humans smell the perfume or cologne of someone they love, they may have an immediate, emotional reaction that’s not necessarily cognitive, Berns notes. “Our experiment may be showing the same process in dogs. But since dogs are so much more olfactory than humans, their responses would likely be even more powerful than the ones we might have.”

The experiment involved 12 dogs of various breeds. The animals had all undergone training to hold perfectly still while undergoing an fMRI scan. As they were being scanned, the subjects were presented with five different scents that had been collected on sterile gauze pads that morning and sealed in Mylar envelopes. The scent samples came from the subject itself, a dog the subject had never met, a dog that lived in the subject’s household, a human the dog had never met, and a human that lived in the subject’s household.

None of the scent donors were physically present.

The dog scents were swabbed from the rear/genital area and the human scents were taken from armpits.

“We requested they not bathe or use deodorant for 24 hours before taking the sample. Nobody was too happy about that.”

Except for the dogs, apparently.

The results showed that all five scents elicited a similar response in parts of the dogs’ brains involved in detecting smells, the olfactory bulb and peduncle. The caudate responses — the reward regions — however, were significantly stronger for the scents of familiar humans, followed by that of familiar dogs.

“The stronger caudate activation suggested that not only did the dogs discriminate the familiar human scent from the others, they had a positive association with it,” Berns says. “While we might expect that dogs should be highly tuned to the smell of other dogs, it seems that the ‘reward response’ is reserved for their humans.”

Here’s a good guess about that scent that lingers like perfume in their brain: call it “Dinnerissimo” or “Temps a Walkie.”