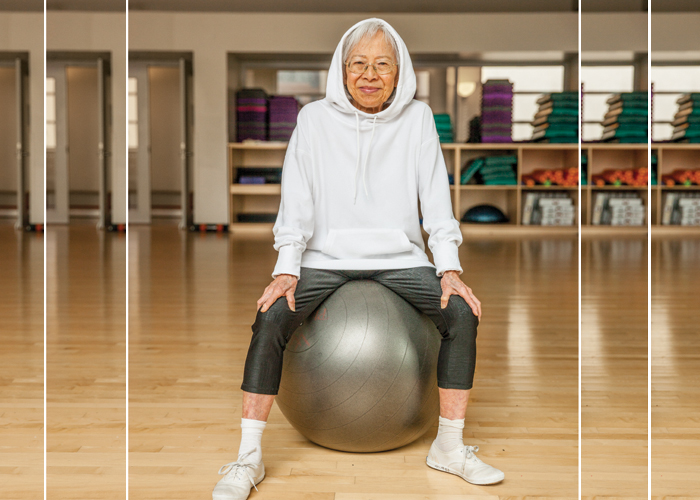 At 70, Elizabeth Quan decided to commit to a daily nutrition and fitness routine. Today, she’s 93 and counting

It’s a Fall morning and the leaves crunch under my feet as I approach Toronto’s central YMCA. Meeting a new workout partner is always a tad intimidating. I have a quick flashback of the time I got competitive with my mom in a morning cardio aerobics class (sans breakfast) and started seeing double. I make sure to have a balanced meal this time and keep an open mind for my time with Elizabeth Quan. She’s 93 years old.

I approach as she’s finishing off her last set on the leg press machine. Halloween weekend has just passed, so when I ask how she spent her time Saturday, I anticipate the common post-Halloween answer: handing out candy or sneaking a few pieces. Instead, Quan tells me she collected ginkgo leaves on Saturday and Sunday, walking around the city in search of ginkgo trees to find the leaves to dry and grind them for her smoothies. Side note: gingko biloba is the oldest living tree species, and its flavonoids can help with dementia, Alzheimer’s disease, glaucoma and macular degeneration.

If you haven’t caught on, Quan is not your average 93-year-old. A burly man curling heavy weights walks by and, nodding to Quan, tells me, “She’s the toughest woman we have.” No kidding.

She’s now making her way through the back extension, fly and abdominal machines – adjusting the equipment with the expertise of an experienced personal trainer. She reminds me that this is simply her warm-up before her cardio class. She does cardio three times a week, Tai Chi weekly and is cutting back on the machines.

Quan picked up a regular fitness routine at age 70. “One day, I said, ‘I am going to be healthy from now on,’ because … I had all kinds of funny things going on – aches and pain.”

Of course, the first thing that comes to mind is: is her enthusiasm for fitness and her long lifespan a family affair? Quan says her entire family was always active. Her mother passed away at the age of 75 and her father at 96. She had six siblings, four of whom died in their 70s and 80s, but a brother, 90, lives in Vancouver and her sister, 94, lives in Hawaii.

But that’s not the only reason for her great age. Daniel Durocher, professor of molecular genetics at the University of Toronto and a senior investigator at the Lunenfeld-Tanenbaum Research Institute, Mount Sinai Hospital, says, “It is likely that her long life is the result of both her good genes and her healthy lifestyle. Indeed, studies in the laboratory have shown that longevity is both the product of genetics and diet.”

Quan defies the expectation that older people should slow down. Bradley Young, associate professor of human kinetics at the University of Ottawa, says, “An increasing number of older people realize that doing exercise is what makes them happy, what energizes them. It may give them goals to shoot for and may make them feel fitter and healthier … People can physiologically benefit from personalized exercise regimes well into older decades of life.”

Sabiston has studied 75- to 94-year-old master-level athletes, noting that their success is not exactly commonplace. “We still struggle with getting 85 per cent of adult [Canadians] to be more active since they are currently not exercising at levels to gain health benefit.”

Exercise has its rewards, but the communal aspect of joining a gym can be just as vital. Quan has found a group of friends at the Y. “It’s a social venue … and it’s good for me to talk to people. [The Y has] other things going on – lectures and healthy living clubs – things like that,” says Quan.
She describes her morning routine to me with as much enthusiasm as a small child describing a recent trip to Disneyworld. She changed her eating habits, too, in her 70s and proudly declares that she is not taking any medications. She does not put anything “man-made” into her body, including anything with white sugar in it – ice cream, chocolate, cakes, pies and cookies.

“One of the first things I do [daily] is drink a glass of hot water,” she says, then does oil pulling while preparing a breakfast of boiled eggs, buttered toast and a bowl of fibre-filled seeds (chia, sunflower, hemp and black sesame seeds) and antioxidant-rich berries (blueberries, cranberries and goji) soaked in almond milk. The oil pulling is an Indian folk remedy that has recently become more popular among North American health enthusiasts. (Commonly, you swish a tablespoon of coconut oil around your mouth for 15 to 20 minutes before spitting it out. Users believe it minimizes the amount of harmful bacteria in your mouth to prevent headaches and other ailments.)

It’s her ambition to improve herself at an age when many stop caring that makes her special. There is a common theme of constantly working on herself, reading and learning and making small changes. Halfway through our talk, Quan casually mentions that in her 50s, she went to the University of Toronto to major in East Asian Studies. Over the course of 93 years on this earth, she’s transitioned through physiotherapy, art (she was a protégé of the late Toronto art legend Jack Pollock), practising reiki and writing (she’s an award-winning author) – utilizing the elements that suit her best and leaving the rest behind. And while staying engaged is a plus, it’s clear that Quan’s knack for reinvention has made her longevity a lot more interesting. Actually, fascinating.