Jackie Collins Kept Her Cancer a Secret from Sister Joan 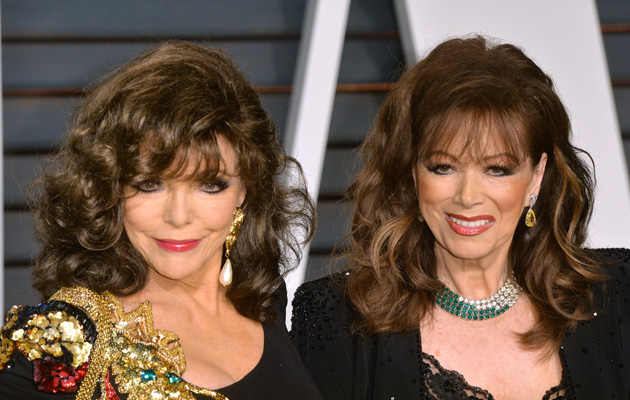 When Jackie Collins died Sunday at the age of 77 from breast cancer, only her three daughters knew she’d been diagnosed with the disease six years earlier.

Jackie had explained that “she didn’t want to be a burden.”

That may also have been a motivation for Nora Ephron, who chose not to reveal to anyone outside her immediate family that she was being treated for leukemia over the course of six years. The screenwriter and author died in 2012 at the age of 71.

But there was another motive as well for Ephron.

Her son Jacob wrote, “At various points over the years she considered coming clean to her friends and colleagues….but what my mother didn’t want was to have her illness define her, turning every conversation into a series of ‘how are you’s’.”

One result of her decision to keep her illness a secret from her friends was the feeling expressed by Meryl Streep, who played the Ephron character in the writer’s Heartburn.

“We have all been ambushed by her death,” said the shocked actress.

For all that cancer has come out of the closet as a disease, it’s still a diagnosis that many people want to hide from the wider world.

When British health insurer Bupa surveyed people diagnosed with cancer, they found that one in four women (and nearly a fifth of men) consider not telling their family, and one in six people know someone who decided not to tell a close family member or friend about a cancer diagnosis.

“A fifth of women (21 per cent) said they considered not telling friends because they simply couldn’t face the conversation, while a similar amount wanted to protect them. Equally there is the desire to carry on as normal, and not wanting sympathy or special treatment.”

Many years ago, at a lunch we had planned weeks in advance, a friend told me that she’d just found out that her breast cancer had returned and metastasized. I remember vividly how she explained that now she was crossing the border between the normal world and the world of cancer and how everything would change for her, not only because her future was in grave doubt but because she would now be seen and treated as someone with a life-threatening disease.

It’s a personal decision, to tell or not to tell.

I’m not sure what I would do. What would you do?