Dr. Oz: The Doctor Is Still In 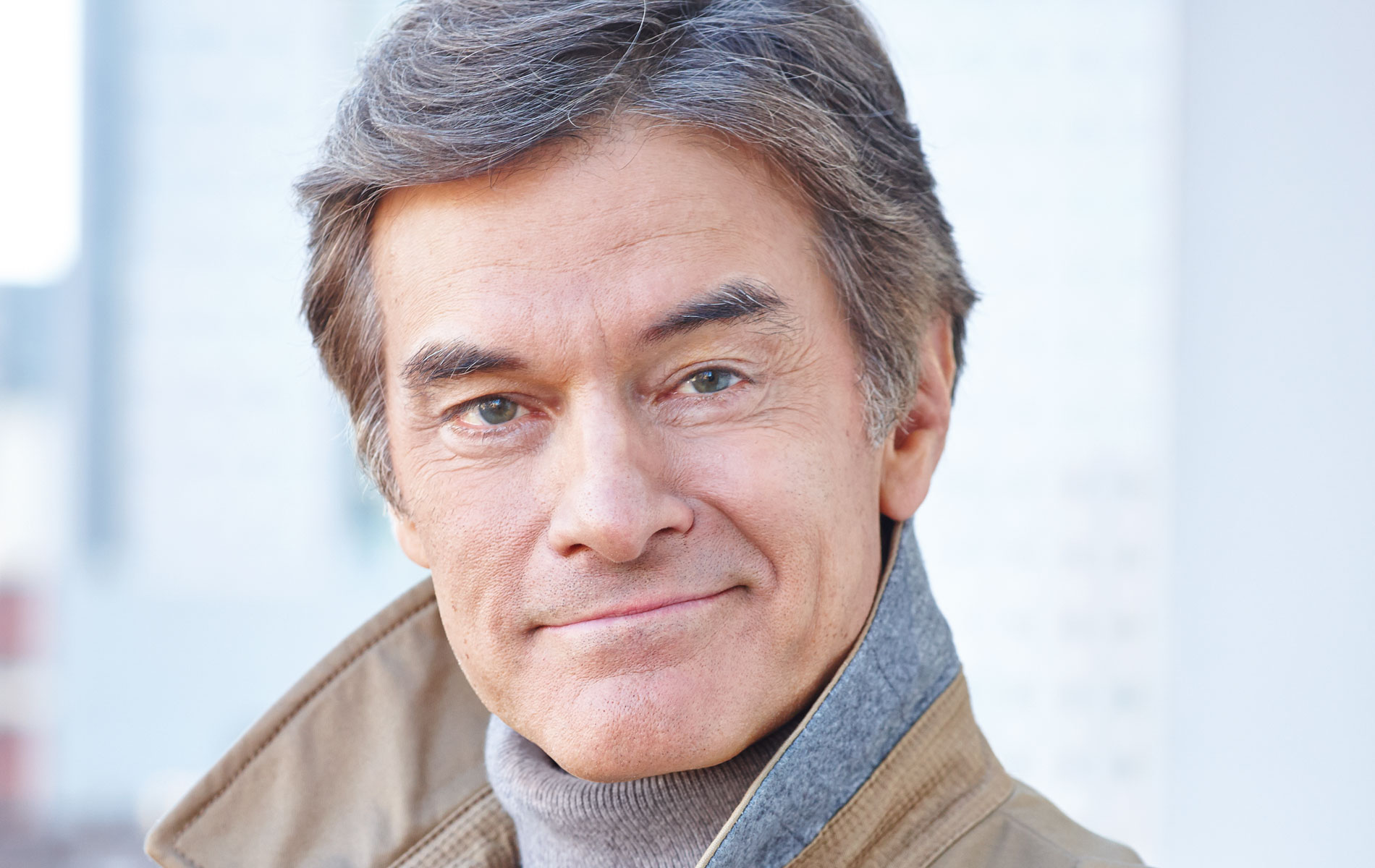 Having faced adversity, Dr. Mehmet Oz revives his everyman bedside manner with a goal to help his audience achieve balance in their lives.

It’s the kind of comeback story Americans love. Granted, Dr. Mehmet Oz’s fall from grace was nothing on the order of some of the more spectacular celebrity scandals – Martha Stewart’s insider trading conviction comes to mind – but for Oz, dubbed America’s doctor, it was a singular blow in a life of uninterrupted success in two of the toughest and most competitive fields: medicine and media.

In June 2014, Oz was chastised by no less an authority than a U.S. Senate panel for touting weight-loss products on his syndicated show. Democratic Senator Claire McCaskill accused him of perpetuating fraud by promoting products as “miracle” cures.

In April 2015, a group of 10 prominent doctors demanded he be removed from his position as a professor in the department of surgery at Columbia University, charging that “he has manifested an egregious lack of integrity by promoting quack treatments and cures in the interest of personal financial gain.”

Oz, a cardiothoracic surgeon and medical director of Integrative Medicine Program at New York-Presbyterian Hospital, successfully fought off that attack, showing that some of his accusers had ties to pro-GMO groups – Oz had criticized GMOs on an episode of his show – and ulterior motives of their own.

Those events marked the height of the onslaught against him. But before that both Popular Science and The New Yorker had published articles criticizing him for giving non-scientific advice and questioning whether he was doing more harm than good.

The question of whether Oz’s TV recommendations were supported by evidence also became a subject of scientific study. Researchers at the University of Alberta found that fewer than than half had some level of published evidence behind them. The bottom line: the doctor’s credibility took a big hit, as did the ratings for his show.

What interested me most was his reaction – what is a barrage of very public criticism like for someone used to adulation?

“I spent most of my adult life with folks complimenting me for what I’ve been able to accomplish,” he told me during an interview in Toronto. “I didn’t expect the criticism and the most surprising part was I didn’t understand it.”

Oz has probably had more impact on more people than almost any doctor in American history.

After landing Oprah Winfrey as a guest on his first TV show, she returned the favour, booking him as a regular guest on her highly rated TV and radio programs.

By 2009, he was so popular that he got his own daily show where he championed healthy eating, exercise and weight loss above everything else. He wrote advice columns and graced the covers of numerous magazines from Esquire to Men’s Health and Good Housekeeping. He co-authored the best-selling You series with Michael Roizen. In 2014, he launched a magazine of his own, Dr. Oz: The Good Life.

Last November, the Dr. Oz Show partnered with leading organizations in the addiction field to hold a “National night of conversation” to engage families in drug addiction awareness and prevention. The U.S. Surgeon General appeared on the program, and the professional journal “Alcoholism Drug Abuse Weekly” featured a headline blaring “Dr. Oz Brings Addiction Discussion to the Masses.”

When Greg Williams, the head of a lead group, Facing Addiction, was challenged on his choice of Oz as a partner, he responded: “We are thrilled he is opening up this important conversation for millions of Americans.”

And, if his celebrity status was damaged by the spate of bad publicity, you would not have guessed it from the interview process. I arrived for my 15 minutes to find a lineup of reporters and camera people and a group of handlers fussing over every detail. When we sat down to talk, they sat with us, eyes glued to me, presumably to discourage tough questions. I did not expect to like Dr. Oz or to elicit anything remotely genuine – I was wrong on both counts.

“You gain new understanding whenever you have real adversity,” he said.

In his case, it took months and a lot of work to arrive at that.

Oz launched his own version of a truth and reconciliation commission to learn why many of his fellow physicians were upset with him.

He had private meetings with unspecified groups of doctors who were angry about the kind of advice he was giving their patients. It’s easy to see how the Dr. Oz imprimateur on products like raspberry ketones or his signature “detox cleanse” could put patients at odds with their primary caregivers.

“If Dr. Oz had been promoting evidence-based information, then I highly doubt many doctors would complain,” wrote Dr. David Gorski, possibly Oz’s fiercest critic, on his blog Respectful Insolence.

“Instead, they had to spend endless hours trying to explain why garcinia cambogia is not a magical fat-burning supplement.”

That particular supplement is still causing problems for Oz – at press time, a new class action lawsuit was launched against him for claiming in a 2013 episode that garcinia cambogia is a “revolutionary fat buster.”

The suit claims this caused sales to spike though “all credible scientific evidence” showed it does not work. A spokesman for The Dr. Oz Show says the lawsuit is an attack on Oz’s free speech. A written statement says the show “does not sell these products nor does he have any financial ties to these companies.”

Oz says he had no inkling that there was a problem with his fellow physicians or that it had been brewing for quite some time. Was it the blinders on his celebrity bubble or the singular focus required for such a high-powered career?

“Like any clinician, you cannot fix a problem you do not see or understand,” Oz said. “It was actually very healing for me when I found honest people who were upset.” He told me those encounters led to deep conversations and mutual understanding.

“It’s hard to dislike people when you know them well because you understand them better,” he said. It is telling that he wanted his detractors to like him.

Any doctor with a mindset shaped entirely by Western medicine would have a hard time understanding Oz, and it’s reasonable to wonder whether the entire controversy is just a clash between the medical establishment and someone more open to alternative approaches. Oz was a rising star in academic surgery when Oprah discovered him. He achieved more fame and fortune with his own show by embracing what Dr. Gorski refers to as “woo.”

Gorski is a surgical oncologist, an associate professor of surgery at Wayne State University and managing editor of the website Science-Based Medicine. He’s also a well-known critic of alternative medicine. Oz’s own father, Mustafa, a retired thoracic surgeon, is in the same camp.

In a 2013 profile in The New Yorker, Oz told Michael Specter: “He thinks what I’m doing is very fringe and he’s worried about me. He keeps asking me when I will be done playing around with this stuff and settle back down to medicine.”

Oz has learned some lessons from the tough experiences of the last year, but he isn’t exactly recanting his positions.

“If I could go back in time,” he says, “I would never talk about weight loss supplements – not because I don’t think they work, but because the field is so polluted with junk right now.”

He blames unscrupulous marketers who claimed their products had his endorsement. “[My viewers] are being taken advantage of by marketers who are stealing my name, reputation and the like, so it’s just too dangerous a neighbourhood to travel in.”

The upshot was a reboot of his show, starting last fall, with a shift in focus to mental health, addiction and balance. The audience numbers had fallen by more than 50 per cent over five years, at least in the U.S. It would be unfair to attribute all of that to the controversy, as people are turning to more sources for their health information, including the boundless stuff that leads to self-diagnoses on the Internet, and programmers say some attrition is natural, the longer a series runs.

The new topics were chosen after a survey to identify the “pain points” for his audience showed that most people were more concerned about their mental health than their physical health. “They’re ashamed that they can’t keep up with life, they feel pulled in a hundred different directions,” he said.

This time, his analysis isn’t controversial – he blames a lack of connection in our society. “Giving folks a blueprint for balance was our effort to soothe some of the discomfort.”

I am skeptical when someone as strongly Type A as Oz talks about balance. I was a bit surprised that the guest he welcomed to discuss it on one episode was his fellow celebrity doctor, Sanjay Gupta of CNN fame. I have interviewed Gupta, too. He is someone who schedules his time in 15-minute increments. Is that balanced?

Oz says of Gupta, the balance comes on other days. “There are many days that he preserves for his family, not just his kids but also his parents.” Oz is Gupta’s friend, and he assures me he can vouch that this actually happens. “It’s not easy,” he concedes.

In his own life, becoming a grandfather put him on track to balance. “It’s the most blissful experience of my life. It makes being a parent worthwhile,” he quips. “When your kids have their own children, you watch life recreating itself. It’s an unbelievably fulfilling experience, plus you can always give the kids back.”

He says he has become more adept at shifting his priorities with each child and grandchild who has come into his life.

“My biggest regrets in life are those birthday parties of my kids that I missed. With each child, I realized that those missed opportunities weren’t worth it because as they got bigger, I’d never have those moments back again.” What really struck a chord was his admission that if he was honest, he’d admit that he really had the flexibility to be present at some of those occasions he “had” to miss. The same is true for so many of us.

I asked him about the ability to be in the moment – something we both agree takes a lifelong practice. Oz offered a tip that he has used personally, his five-minute downtime rule: “I want everyone to go to the bathroom because I know no one will bother you there … put the lid down and just sit there for five minutes, enjoy the blissful moment of whatever you’re going through that day … Crazily, by yourself, you’ll be able to process what’s happening in a way that allows you to live more in the moment when you come out of your five-minute session.”

He promises that afterwards we’ll be able to work not just harder but also smarter. Hard work is one area where Oz has complete credibility.

With his contract up in 2017, it’s not clear whether that work will pay off for his show. Oz says he might be discouraged if his whole goal was to make a TV show. He might have come to believe the people lambasting him. He remains proud of his ability to bring alternative approaches to healing into our living rooms. He says he’s focused on something much more important – getting people to appreciate how precious their lives are.