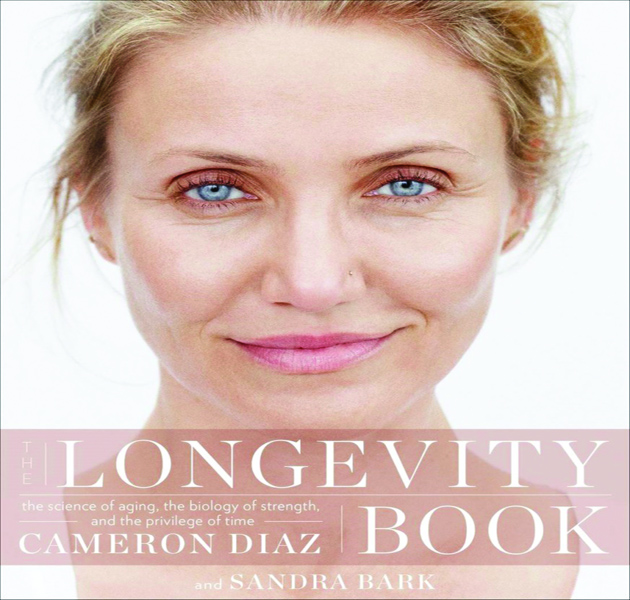 I’m 23, but right now I feel about 60,” the New York magazine story about a computerized bodysuit that mimics the aging experience—from osteoporosis to weight gain to end-stage glaucoma—began, as if the “aging experience” itself is a metamorphosis into a blind, brittle-boned Quasimodo.

The shoe’s on the other crow’s foot, so to speak, in The Longevity Book, by actor, model and author Cameron Diaz, 43, who pairs science, perspective and optimism (go figure!) about aging when she declares, “I don’t want you to live in fear of aging…I want to reframe the way that we, as women, talk about aging.”

Sure, you have reason to be skeptical of what Timothy Caulfield, author of Is Gwyneth Paltrow Wrong About Everything?, calls “the illusion of celebrity authority.” But then again, Diaz hits far closer to the “true” aging experience than the osteoporosis suit.

Consider fellow model-turned-author Christie Brinkley, 62, who looked radiant while touring in support of her beauty secrets book Timeless Beauty last year. Or Kim Cattrall, 59, whose TV series Sensitive Skin, now in its second season, confronts the complex facets of aging and relationships. In fact, the reason Diaz, Brinkley, Sensitive Skin and Younger—a comedy series about a woman in her 40s who pretends to be in her 20s to further her career—are able to tackle aging from varying perspectives is precisely because it isn’t a one-size-fits-all process.

After all, in a 12-month span dating back to last March, Harrison Ford, in his mid-70s, survived a plane crash, piloted the Millennium Falcon and signed on to play Indiana Jones again. Someone call me when they invent a bodysuit that makes you feel like him.

A version of this article appeared in the June 2016 issue with the headline, “Aren’t You A Little Young For This?”, p. 17.