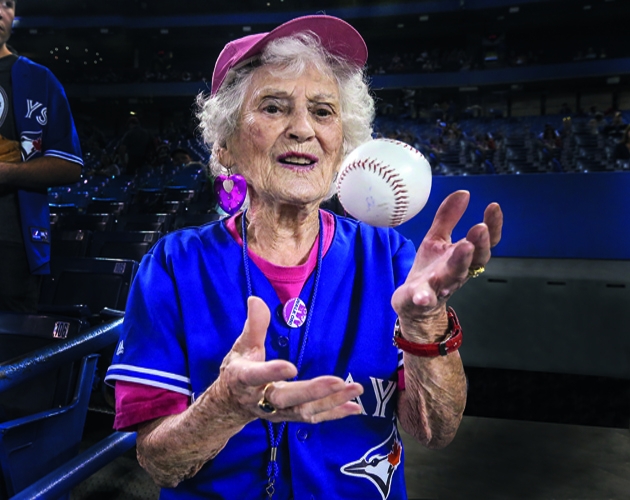 By now we all know how important it is to stay active, eat healthy, manage our weight and stay socially engaged. But the magic of reaching the centenarian milestone is still a mystery.

Kitty Cohen challenged me to a game of Scrabble when we last met.

It was at the launch event for the Princess Margaret Cancer Centre’s One Walk to End Cancer—and Kitty was the main draw. She will be participating again this year, at the age of 103.

I first met her six years ago, after an organizer casually mentioned that the oldest walker was 97—I jumped at the chance for an interview. Since then, Kitty has become a celebrity with an impressive portfolio of coverage on television, radio and print. She’s even thrown out the first pitch at a Blue Jays’ game. “103, come jive with me,” she recited by way of greeting. “104, I wouldn’t mind for some more. And 105, I’m glad to be alive.”

There’s no question that Kitty is extraordinary, and a big part of it is genetic. But her lifestyle also ticks all the boxes when it comes to the things that experts say promote longevity.

She exercises every day, in addition to walking. She sings with a group, there’s tap dancing every Wednesday, she does pottery, loves to read and play Scrabble, and she has taken up a new hobby—drumming. Kitty is very social and recently spent a month with family in Arizona. She visits schools to hear children read and thoroughly enjoys her recent fame.

“I am an inspiration to many, many walkers,” she told me.

Like Kitty, most centenarians are women, fully 84 per cent, and when you get up into the older parts of the demographic—105-plus—that number is even higher. According to Statistics Canada, the reason is that women experience lower probabilities of dying at all ages. That may explain it to actuaries, but the medical profession still isn’t entirely sure of the reason, even though the gender disparity in longevity exists all around the world.

Rochon led a demographic survey of centenarians in Ontario and found nearly 2,000 alive and well, an increase of 72 per cent in a 15-year period. Here’s what was really astonishing: those who reach their 100th birthday tend to do so in pretty good health. Half live in the community in their own homes, 20 per cent manage independently without formal supports, and only a quarter get some help with publicly funded home care.

“Relative to people who might be somewhat younger, they may have fewer chronic conditions. They may be on fewer medications,” she told me. “So the question is how and why did they get there?”

Rochon concedes that when it comes to the answers, people come up with generalities. By now we all know how important it is to stay active, eat healthy, manage our weight and stay socially engaged. But the magic of reaching that milestone is still a mystery.

“They have a real passion for life and they’re always interested in new things, very young in the way they behave, always willing to take on a new challenge,” says Rochon.

That sounds a lot like Kitty. “I want to be among those who are living and smiling and dancing,” she told me. “If you say that you can do it, baby, you can do it! It’s all a state of mind.”

I haven’t been able to make our date yet because her schedule is as challenging as mine. I’m looking forward to it but I have to admit I’m getting a bit nervous about that Scrabble game.