The Alinker: The New Mobility Aid That Has Everyone Talking 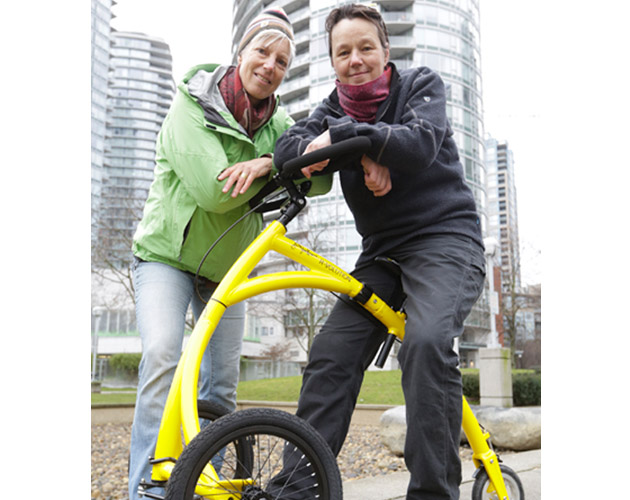 Upward and onward! This new invention helps people with disabilities overcome discomfort when trying to get around.

“If I lose a leg, in my dreams I’ll still run,” Barbara Alink declares, somewhat appropriately given we’re standing near Philosopher’s Walk in downtown Toronto. Reflecting on her passion for fostering community, what Alink may lack in Aristotle’s classical teachings, she makes up for with a yellow mobility device that looks like a reverse tricycle for grown-ups—two wheels in front and one in the back and no pedals. She calls it the Alinker, the antithesis to wheelchairs and walkers, which her own mother refused to use because, as Alink points out, they only emphasize a person’s disability.

“You ask anybody [who’s] 85 years old—they’re not 85. We are not who we are on the outside,” Alink says. “Inside, we’re human beings who just want to live a full and loving life.”

Alink’s desire to build communities really took hold in the 1990s when the Dutch-born restoration architect spent a decade spearheading the construction of schools in post-war disaster zones like Kenya, Kosovo, Indonesia and Afghanistan. She eventually moved to British Columbia in 2008 and, inspired by her mother, she built the first Alinker prototypes in 2011.

While on the surface it’s a tool that allows the user the freedom to exercise their legs, remain at eye level with others and enjoy greater independence, the device is also the 52-year-old’s way of bringing people together at the most intimate, individual level.

“I’m lonely, I start eating worse, I don’t move anymore and I get diabetic or I get heart disease—all those habits come from [the fact] that we are lonely and we don’t belong,” she explains. With the Alinker, she notes, “Your muscles are stronger, your condition is better and you’re so much happier. It’s cheaper than a dog because you don’t need to feed it, but it’s got the same sort of effect. You go out in the park, and everybody talks to you.”

While Alink tends to the mounting list of orders for Alinkers on her website, she notes it’s received glowing reviews in the Netherlands. And this past June, at the annual ideacity conference (created by ZoomerMedia founder Moses Znaimer), she received a standing ovation after telling the story of the device.

“We are all disabled at some time in life, and that’s just being humble,” she says, putting her philosopher’s hat back on. “My grandma always said we’re all born little naked creatures who just want to be happy. That’s who we are.”

A version of this article appeared in the November 2016 issue with the headline, “Upward, Onward,” p. 26.