Dr. William Davis On Why The Health Care System Is Flawed 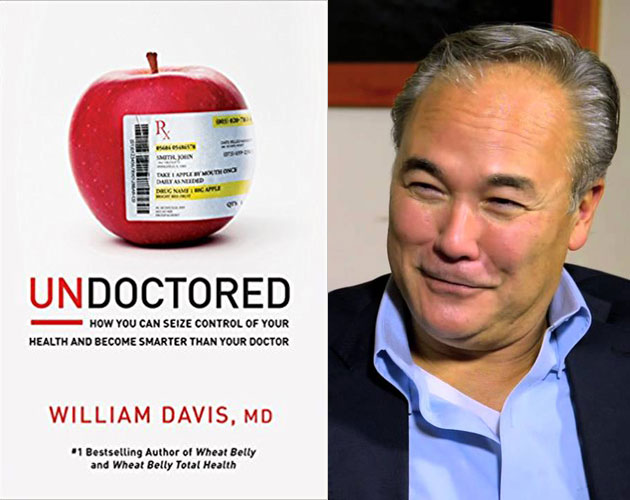 Dr. William Davis, author of Wheat Belly, is continuing his battle against the health care system with his new book Undoctored: How You Can Seize Control of Your Health.

You may not instantly recognize his name, which is Dr. William Davis, but if you’ve been even minimally aware of your surroundings for the last half-dozen years, you’re familiar with his premise, which is this:

Wheat and grains are no good for you.

Now, the author of Wheat Belly and master of all things Wheat Belly (diet, blog, guides, cookbooks) has a new premise, perhaps even more controversial and certainly more provocative, which is this:

Doctors generally aren’t good for you, either.

His new book, published this week, is titled Undoctored: How You Can Seize Control of Your Health and Become Smarter Than Your Doctor.

It won’t do the Milwaukee-based cardiologist any favours among his medical peers who are often suspicious of patient empowerment.

He writes, “I propose that people can manage their own health safely and responsibly and attain results superior to those achieved through conventional health care—not less than, not on a par with, but superior to.”

When I spoke to him, he said he wrote this book because so many people who went on the wheat belly diet were told by their doctors that “it’s stupid.”

Here’s what else he had to say about…

“The least informed person in the room in a medical visit is the doctor. You know more about your health than the doctor does. he’s more worried about procedures, or sexy sales rep…

Doctors are not taught how to make people healthy. They’re taught to use the tools of the medical system which happen to pay very well. They like driving their Maseratis and having homes in Florida.

“Mainstream doctors don’t understand health nor do they want to. Doctors are locked into a health care system that puts profit first. They think that a colonoscopy, hormones and insulin is providing people with health. Doctors will prescribe a bone density test but they don’t say, ‘Let’s talk about your Vitamin D, how to eat better, how you’re sleeping.”

Nobody in Toronto ever heard a doctor say,’Let’s talk about bowel flora and how to restore it and therefore reduce cholesterol, blood sugar, have more vivid dreams, feel better and be happier.’ They don’t say, ‘Let’s talk about health.’ They’re too intent on scheduling a procedure.”

Health care and the health system:

The health care system has nothing to do with health care. Its enemy is not disease, it’s healthy people. They’re useless to the health care system. It’s not a benign, benevolent system. Calling it a health care system is like calling the prison system a good behaviour system. (In the book, he includes a note to Canadian readers and advises, “Despite the difference across the border, an essential and corrosive commonality remains: Health Care is a huge business, whose aims do not align with yours but are premised on profit, not on dispensing health…it’s not just the doctors, but the many players in the healthcare system who are responsible…costs to fund Canadian health care have grown 53 per cent over the last decade, a rate that eclipses the growth of Canadian income.)

“A lot of counter arguments are based on misinformation. I never said wheat belly is about being gluten free. It’s not about gluten. It’s about the factors intrinsic to wheat and grain seeds (gliadin, gliadin-derived peptides the lectin protein of wheat, rye, barley and rice). which are largely impervious to human digestion. We started out with wheat. Wheat’s always been a problem. But it became clear that we had to extend the conversation to include all grains. There are so many components in grains that are harmful to humans.

It’s a terrible oversimplification to say this diet is gluten-free. The industry wants you to buy gluten-free. They’re hawking horrible replacements, like potato flour, that make make you fat and diabetic.

Taking charge of your health:

(Dr. Davis also recommends selected tests useful for monitoring health. While direct-to-consumer medical imaging services are available in the U.S., he writes, “In Canada, a doctor’s referrals still required, a reason for us to agitate to get this restrictive regulation overturned.”)