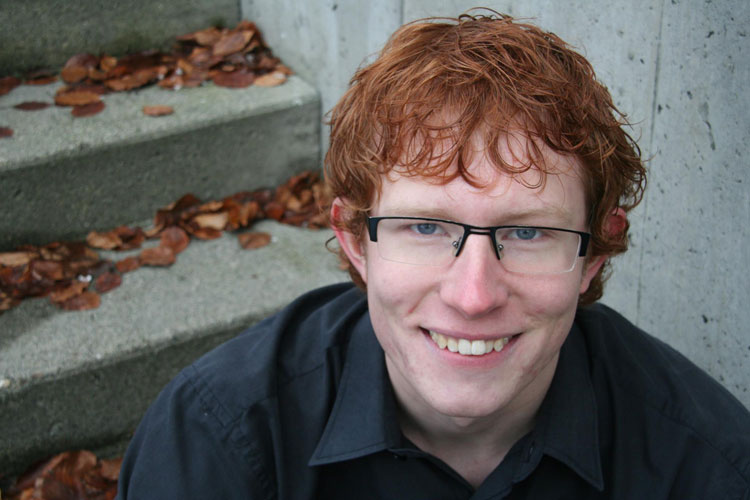 Talk about head transplants and you’ve instantly got everybody’s attention.

William Sikkema knows the ideacity audience may not remain, um, alert if he starts talking about his work involving integrin linked kinase and the structural dynamics of frameshift-inducing RNA hairpins.
See what I mean?
But head transplants! Now that’s a different story!
And while it may sound like something out of sci-fi and maybe a little creepy, Sikkema likes to point out that heart transplants were once regarded that way and seemed just as improbable.
What’s really getting the doctoral candidate and his research colleagues at Rice University in Houston excited, however, is not just the possibility of head transplants but the science, and particularly the material, that will make them possible by connecting the spinal cord to the brain.
Even more exciting is that the same approach may be able to repair spinal cord damage in quadriplegic and paraplegic patients.
“We think it’s very promising but it’s at the very early stages,” he says. “We’re still in the small animal stage of trials but we’ve had a few encouraging results.”
Sikkema expects to go to human trials in the next two or three years.
The magic material in all this is graphene nanoribbons.
The world’s first 2D material, graphene is 1 million times thinner than a human hair and 200 times stronger than steel.
Sikkema’s talk begins with a show-and-tell about the chemistry of graphene, about molecules and atoms.
By the time he gets to the head transplant business, it doesn’t seem so strange.
“We can already re-connect bones, vessels and muscles,” he says. “But re-attaching the spinal cord is the hardest part.”
Sikkema is not a surgeon, but as a biochemist specializing in nanotechnology— “nano” means very small — he works with surgeons and other medical specialists.
The best new ideas come from interdisciplinary exchanges, he says — “as with ideacity.”
His ideacity talk about head transplants and graphene nanotechnology is the first before a non-academic audience for the British Columbia-born and raised scientist.
He knows that the issue of ethics will be raised.
He  says he’s usually asked about the ethics of cutting animals’ spinal cords for research purposes.
The answer:  “We use as few animals as we can and only when it’s justified for repairing broken humans.”
He’s also asked about the ethics of transplanting one person’s head to another’s body — or, when you think about it, the opposite: transplanting one person’s body to another’s head.
Who is that person? Isn’t each person unique rather than a collection of interchangeable parts?
“People said the same thing about heart transplants and even about blood transfusions,” he says, “but most people have come to accept it.”
He adds, “I think it is ethical and something that will benefit humanity.”
Asked about whether his work has changed the way he views humans,” he responded, “I’ve wrestled with this issue for a long time, but I think humans can be both special and unique (which is informed by my religious beliefs) and be made of interchangable biological parts (which is informed by scientific training).  Humans are full of paradoxes in my experience.”
William Sikkema appears at the ideacity conference (June 14, 15 and 16) in Toronto on Wednesday, June 14, 2017. For more information, or to purchase tickets, visit www.ideacity.ca/ideacity-2017/. If you can’t attend ideacity in person, be sure to check out the free live stream or watch his talk on the website.