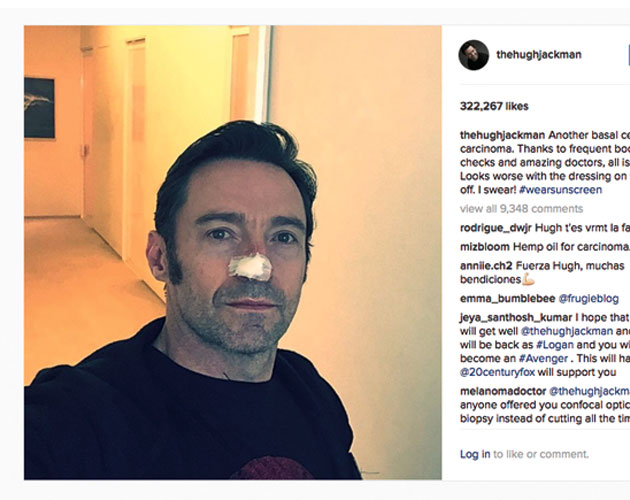 Early detection and surgery is still your number one line of defence against skin cancer—but with a better understanding of cancer, less invasive treatments are becoming a reality.

Fans of Hugh Jackman were all atwitter back in February when he used social media to announce he’d had another skin cancer surgery.

The 48-year-old Australian actor had been treated for basal cell carcinoma multiple times before. “WEAR SUNSCREEN,” the celeb tweeted in all-caps to followers, along with a photo of his bandaged nose. Just two days later, we were blindsided by an uglier side of skin cancer: much-beloved Stuart McLean, long-time host of The Vinyl Cafe, died from melanoma at the age of 68.

There are two categories of skin cancer: melanoma and non-melanoma. (Basal cell and squamous cell carcinomas are the two main types of non-melanoma.) Without question, melanoma is the most serious. It’s similar to the cancers that invade lungs and colons and breasts and, like those types, melanoma can be deadly. “When it’s not caught at an early stage, unfortunately, it may spread to other major organs, and it becomes very challenging,” says Dr. Andrei Metelitsa, a dermatologist and clinical associate professor at the University of Calgary. Melanoma claimed the lives of 1,200 Canadians last year, while almost 7,000 were newly diagnosed with it.

Non-melanomas are different. They rarely spread to other parts of the body like most other cancers. In fact, they’re often excluded from national cancer statistics because they’re so common, especially among older people, and they’re rarely fatal. But that doesn’t mean non-melanomas can’t also have consequences. “They can be locally destructive and disfiguring,” says Dr. Jason Rivers, a dermatologist at Pacific Derm in Vancouver. “People can lose large parts of their nose and ears.” Every year, more than 75,000 Canadians learn they have non-melanoma skin cancer.

Sunburns and overall sun exposure, especially before the age of 20, are the cause of most skin cancers, even if they take decades to catch up with you. People with fair skin and light-coloured eyes have a higher risk because they’re usually more prone to sunburn. They have less melanin in their skin, a pigment that gives skin a deeper colour and also provides some – not complete but some – protection against UV damage.

Genetics can occasionally factor into non-melanoma skin cancer. But it plays a much greater role in melanoma. You’re more likely to develop the disease if you have a family history of it. Yet even then, melanoma isn’t predestined, notes Metelitsa. “Most skin cancers are preventable. Your children may have your complexion, but if they’re using methods of sun protection – sunblock, clothing, hat – their likelihood of developing those skin cancers can be significantly diminished.”

Perhaps it’s too late for you to change what you did in your teens. You can, however, be on the lookout for any new or changing spots on your skin. “Early detection is the foremost way to avoid having to go through painful – or at least inconvenient – treatment,” says Rivers. In the case of melanoma, early detection may even save your life. “If you see something that’s changing or not healing in a month or so, it should be looked at.”

Joan Oracheski, 50, who lives near Ottawa, initially put off seeing a doctor about a darkening spot on the side of her nostril. “I thought it was just a big freckle,” she says. But when she checked her old wedding photos, she realized the spot on her face was new. A dermatologist confirmed the worst – it was melanoma. “It was a little bit surreal,” Oracheski remembers. Tragically, she’d already lost a sister to a different type of cancer. “All those things start going through your mind.”

Oracheski, however, was lucky. The cancer was in situ, or at stage zero: it hadn’t yet invaded beyond the skin surface and it was treatable. If she’d postponed her medical appointment much longer, the outcome could have been quite different. “In my teenage years, I was a sun worshipper. I couldn’t get enough of it,” Oracheski confesses. “That was probably the single most contributing factor. I’d be out by the pool in my bathing suit until the sun went down.”

Nevertheless, nothing cures skin cancer like finding it as soon as possible. If she’d known better, Oracheski says now, “I would have asked my GP about the spot much earlier. I wouldn’t have left it so long.”

When skin cancer is discovered, surgery is usually still the first line of defence. In cases of melanoma, that may include a biopsy of the nearby lymph nodes to check if it’s metastasized. Even with non-melanoma, it’s important to get all the margins of the cancer, so it doesn’t grow back. “The basal cell carcinoma can be like a tree root system,” says Rivers. “You might think there’s not much going on but, under the surface, it can be quite extensive.”

Judi Fisher, 69, has had two different non-melanoma basal cell cancer growths removed from her face. One of which required follow-up surgery. “Now, one end of my nose is numb, and there’s a bit of scar tissue,” says Fisher, who lives in London, Ont.

The surgical approach will depend on factors like the cancer type and its location on the body. Fisher’s spots were removed with simple excision at first but, the second time around, her surgeon used the Mohs micrographic procedure, which is more precise and has a better chance of getting everything. In the first part of this procedure, as much of the growth as possible is removed. Then the tissue is examined under a microscope while the patient waits. If there’s any sign that cancer has been left behind, the surgeon has another go. “I had to go back in twice,” says Fisher.

Many new non-surgical treatments for all types of skin cancer have appeared in recent years, thanks to a better understanding of the science of cancer. This has been especially lifesaving for melanoma. “Traditionally, survival rates were less than 50 per cent for advanced melanoma,” says Metelitsa. “Now, there are a lot of newer, exciting developments in immunotherapies and chemotherapies that offer hope.” Some of these more targeted therapies are based on inhibiting the expression of certain genes or blocking certain signalling pathways responsible for cancer growth. There are also drugs and topical creams that strengthen your immune system’s ability to kill cancer cells. Oracheski’s melanoma was successfully treated this way, allowing her to avoid surgery.

More groundbreaking treatments like these are in development, says Rivers. “There are new drugs on the way, like virus-derived treatments. [It’s] an exciting time as we can now offer hope to our patients.”