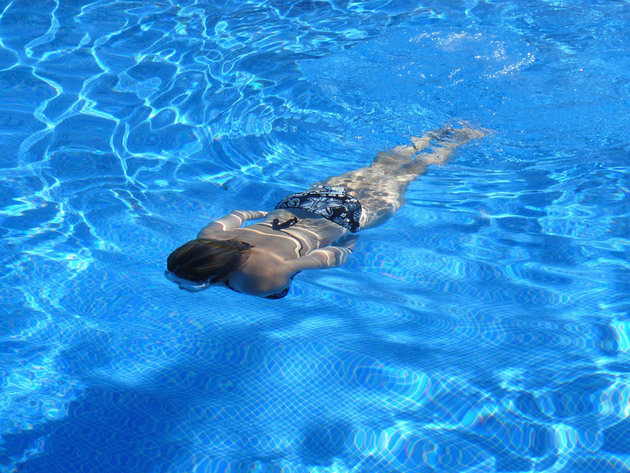 Getting into the swim of things may be as good for you mentally as physically. Rebecca Field Jager takes a dip.

The light dances below the surface of the pool. Once I fall into my rhythm, the world slips away, and I am lost in the delicious nothingness that comes with swimming lengths. I have no weight. Sounds are muted. And the water, but for its resistance, is barely perceptible against my skin. My mind slows to an easy pace. I am, in the vernacular of fitness buffs, in the zone.

“The water holds you in a different way than the earth can,” says Canadian swimming icon Mark Tewksbury, who, among his many accolades, cinched gold at the 1992 Barcelona Olympic Games. “It’s incredibly meditative.”

Unfortunately, the day I interviewed Tewksbury I had messed up and was late. Daylight savings had kicked in the night before and, while my computer and cellphone adjusted automatically, my household clocks did not. There I was, trying to figure out what to make for lunch, when my email dinged.

Just making sure we are on for today around now …

And then it happened. A sense of calm washed over me. I made the call, apologized and got on with the interview. I credit the save to my daily swim routine.

Here’s the thing. While no one enjoys making a stupid mistake, for some, it’s like water off of a duck’s back, whereas for people like me, it’s akin to an oil spill. Even a low consequence blunder can leave me coated in icky feelings that cling for hours, sometimes days. To help combat this, I’ve always tried to do some sort of fitness routine, but it wasn’t until almost a decade ago, after moving across from a local community centre that had a pool that I began swimming laps. Once I was fully into my routine, I noticed that I experienced a sense of well-being that transcended the endorphin rush I had with other cardio workouts—a state of being more in line with what my yoga friends raved about. It made sense. Low impact. Controlled breathing. Subdued stimulus. All that and, for me, a lifelong affinity for being in, on or under the water.

Canada has one-fifth of the earth’s fresh water and the longest coastline in the world so, like many kids across our nation, I grew up with access to places to swim. My hometown, North Bay, Ont., is situated on two lakes—the large, warm and shallow Lake Nipissing and the smaller, cold and deep Trout Lake. Swimming lessons were practical, affordable and offered at the public beaches of both lakes, so summers for my siblings and me always included advancing our swimming skills. Rain or shine and with only the threat of lightning as a catalyst to cancel an end-of-session test, we took the plunge, and I have fond memories of grinning like a carp with chattering teeth as my mother congratulated me and wrapped me in a towel.

My love of water extends to swimming pools. I remember hanging out in my backyard listening to the splashing and laughter coming from the neighbour’s and praying for an invite. When my own kids were little and we were set to purchase our first home, I refused to consider anything that didn’t have an in-ground pool. And more recently, when I was on the hunt for a condo in today’s competitive downtown Toronto market, I rode out many a miss and waited two full years to finally land one in my dream building – the one with the sizable indoor pool. I’m not exactly a master of self-discipline, you see, and if there’s one thing I know about me and my exercise commitments, the closer I am to the venue, the more likely I’ll follow through.

Interestingly, Tewksbury doesn’t swim regularly but applies his wealth of self-discipline to exercising as well as running Great Traits, a leadership and development training company he co-founded with Olympic coach Debbie Muir. Certainly, the pull of the water never leaves him. At the Rio Olympics last summer, where he was part of the CBC team, he decided to do laps after a stressful day. But since stepping off the podium and retiring almost a quarter of a century ago, Tewksbury has filled his life with trying new things.

“Let me put it into context,” he says. “I joined a swimming program when I was eight years old after watching the Montreal Olympics and thinking I want to be part of that. But for the next few decades, I was never allowed to do anything else.”

Also, he said, as someone who grew up swimming competitively and as part of a team, he found it difficult to swim recreationally and alone.

They don’t have to be, says Sandy Oliver, 76, a Toronto woman who didn’t learn how to swim until she was 40. Having almost drowned when she was a child, she was petrified of the water and, although she made sure her four children took lessons, she herself stayed on the sidelines. But then, realizing she was missing out on the fun and a way to stay fit, she enrolled in a Scared Skinny program offered at a nearby YMCA. From there, she joined Masters Swimming Canada (MSC), and it changed her life.

MSC is a not-for-profit group established in 1971 that promotes swimming for adults at all skill levels from new learners and up. To date, there are some 10,000 registered members aged 18 to 105 and more than 250 clubs across Canada. Finding a club is as easy as going on mastersswimmingcanada.ca. While fees and programs vary, essentially all clubs offer lessons, coaching, group swims if you just want to do laps in the company of others, invitational meets, and provincial and national competitions. The Canadian Masters Championship is held annually with competitors, their families and friends gathering in a host city, taking over hotel rooms, touring the town and, of course, cheering each other on. Super keeners head off for the international masters meet.

Oliver, who belongs to the Thornhill Masters Aquatic Club, competed for years on all levels of competition, accruing many medals and a wealth of self-esteem. Fitness-wise, her efforts have been rewarded with a consistent ideal weight over the past three decades, low blood pressure and a vitality that those who meet her remark upon and fuels her to take care of her home and garden.

Although she’s proud of her physical accomplishments, it’s the social aspects of the program that she holds most dear.

“I’ve met so many people and made so many friends, not just here at the club but from all over the place,” she enthuses. Her coach and the owner of Thornhill Multisport, Ian Feldman, attests that the camaraderie felt among members surprises those who may have joined simply to get or stay in shape.

“You put a group of people together regularly who share a common interest and goal, and friendships naturally develop whether it’s striking up conversations in the locker room, hanging out around the pool or going out for a drink afterwards.”

For me, while I value my alone time in the pool, adding a social element has its appeal.

It might be nice to see the light dancing below the surface of the pool with a kaleidoscope of new friends.