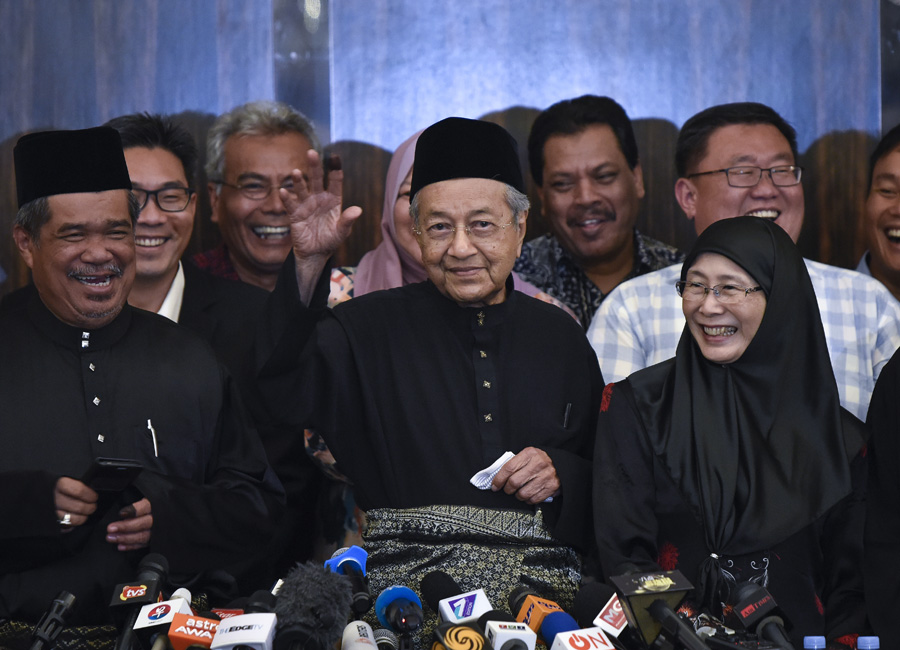 Mahathir Mohamad, 92, flanked by supporters following being sworn in as Malaysia's new Prime Minister on May 10, 2018. Photo: Chris Jung/NurPhoto via Getty Images.

Queen Elizabeth II may still sit upon the throne of the United Kingdom and the Commonwealth, but there’s a new claimant to the crown of “oldest world leader.”

Mahathir Mohamad, who last week won election and was sworn in as Prime Minister of Malaysia, turns 93 in July and is officially the oldest current world leader, edging out Her Majesty, who turned 92 in April of this year, by a mere nine months. Of course, Queen Elizabeth II is still the oldest female head of state in the world and oldest reigning British monarch in history.

In a 2017 interview with The Sunday Times, Mahathir claimed his secret to remaining healthy and vibrant is simple moderation.

“I don’t smoke, I don’t drink, I don’t overeat. I eat just enough food to keep me going,” he said. “There is a tendency for people over a certain age to become obese. They have a big stomach and to satisfy themselves, they drink and they overeat, which places a burden on their heart. I have been about 62-64 (kg) for years. I can wear my clothing made 30 years ago.”

And that attitude directly contributed to his most recent political success. As he said in the same interview, “I happen to be healthy, I can do this work … For me, to say I want to go to sleep and retire and prepare for my afterlife, I think that is very selfish.”

Despite his healthy habits, Mahathir’s rise to the Prime Minister’s seat stunned many onlookers. “An autocratic politician emerges from retirement at age 92 to defeat his handpicked but appallingly corrupt successor, and to clear the way for a former deputy he had imprisoned on trumped-up charges,” reads the opening line in a New York Times piece about the election, underscoring the extraordinary circumstances surrounding the political victory.

To better understand the incredible political feat the 92-year-old pulled off, you have to go back to Mahathir’s first run as Malaysia’s PM, which lasted from 1981-2003 – a period of political dominance that ushered in an age of financial and technological prosperity as well as widespread political and social corruption.

In an opinion piece following his election, the U.K.’s Guardian warned that Mahathir “is no friend of liberal democracy” and noted that, “Under his previous tenure, his government launched vigorous attacks on the judiciary, arrested and detained peaceful opponents under internal security laws, and tightly controlled the press. He is a defender of Malaysia’s retrograde affirmative action programme, which privileges Malays over the country’s other races. These racial privileges include discounts on housing, a university quota system that was officially abolished in 2002 but is widely believed to persist in practice, as well as preferential access to government jobs and public sector contracts.”

Of course, the counter to that argument is the very scenario surrounding Mahathir’s comeback. The new PM broke with his original political party, the United Malays National Organisation (UMNO), under which he presided during his first tenure in office, in 2016. At the time, however, the UMNO was still in power, with Najib Razak, one of Mahathir’s original handpicked successors, serving as PM. As such, Mahathir decided to run against his notoriously corrupt successor, as well as his old political party and, after helping to cement their power in the nation decades early, he brought the UMNO and Razak down.

Mahathir even enjoys the support of an old political ally, Anwar Ibrahim, his “charismatic protégé, deputy and presumed heir … who was imprisoned [by Mahathir] in 1998 on sham charges of sodomy and corruption.” As the New York Times pointed out, “Mr. Anwar said the opposition [to Najib Razak] was not supporting Mr. Mahathir the person, but rather ‘the reform agenda he has committed to.’” The same Times piece also noted that Mahathir, “has made good on his promise to seek a pardon for Mr. Anwar, who could succeed him.”

So far Mahathir’s comeback proves that age should never be viewed as a hindrance to success. As far as Malaysia’s future under Mahathir, lets hope that the wisdom that’s supposed to come with age allows the new PM to see the error of his past ways and to atone for them by putting the nation on course for a prosperous and peaceful future for all of its citizens.