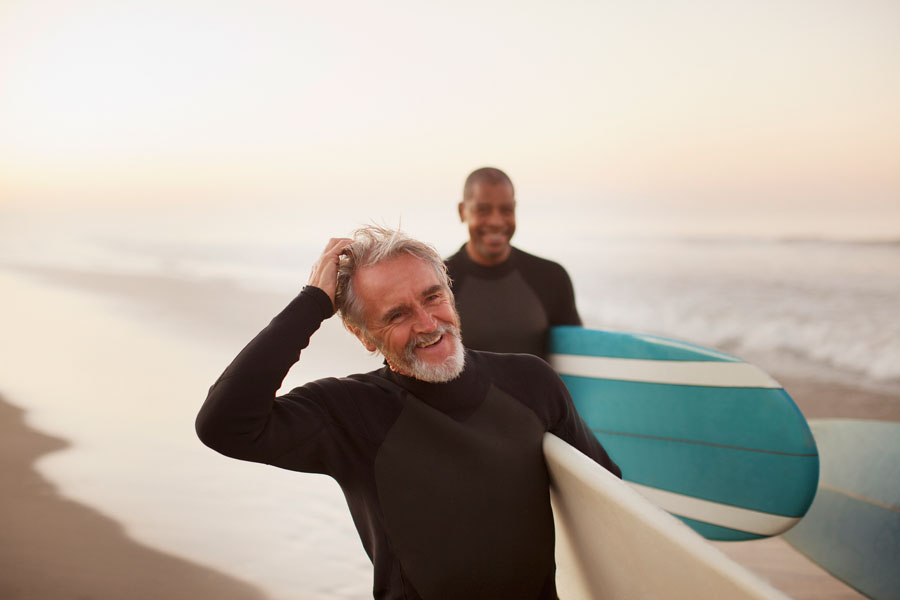 Here, we debunk some of the most common misconceptions about growing older.

Forget what your driver’s license says and the ideals of eternal youth plastered all over the media. We’re in the midst of a revolution when it comes to how we view aging. Not only are people living longer, they’re staying healthy longer and working longer too. The wealth of knowledge and experience that older adults have to offer is finally being recognized again.

Unfortunately, there are still many misconceptions about what it means to “grow old.”

Myth #1: We all age the same way
Some policy makers, advertisers and companies seem to treat everyone the same. However, just as no two children develop at the same rate, no two adults are going age the same way. Experts note that the older we get, the more diversity there is among our peer group. Our genes, environment and lifestyle all play a role in how we age. We can’t predict what’s going to happen as we age by looking at others.

Myth #2: You’re going to “lose your mind”
People used to think “going senile” was part of the aging process. Now experts know there’s nothing “normal” about severe memory impairment and loss of cognitive functioning — they’re a result of degenerative brain diseases such as Alzheimer’s disease.

But take a closer look at those numbers: experts note that most people don’t develop dementia.

Myth #3: Older people are grouchy and miserable
Forget the stereotypes of “grumpy old men”: studies have shown that happiness increases with age. Rather than reaching a peak at middle age and declining as we get older, experts say happiness is more of a u-bend. Among most people in most countries, it hits a low at middle age and bounces back. It could be older adults feel less pressure and more freedom, or that life experience has shown them what’s really important. They often have better coping skills for stress, and are past the pressures of establishing a career and raising a family, say experts.

That’s not to say there aren’t unhappy older adults — but there are unhappy people in all age groups. Sometimes personality changes are symptoms of a health issue such as depression or dementia — in which case, any unexplained changes in behaviour should warrant a conversation with a doctor.

Myth #4: Your genes determine your destiny
Genes play a big role in how long we live and what health risks we’ll face — but a DNA test won’t tell the whole story. Many people who have genes linked to certain diseases never develop those diseases, while people who have no genetic risk can be affected.

Experts aren’t entirely sure why certain genes get “turned on” or “turned off”, but studies of identical twins have revealed some clues. Our environment may play a role, but so do our lifestyle choices like smoking and how we combat stress. Experts say that healthy lifestyle habits like a good diet and regular exercise may be as important to health and longevity as good genes.

Myth #5: You can’t teach an old dog new tricks
Older adults are often seen as “set in their ways” and less innovative than following generations. However, many artists, writers and business people have enjoyed some of their greatest successes later in life. (Consider Michelangelo, who designed the dome of St. Peter’s Basilica at age 70 — or Warren Buffet, who is still a powerful business magnate in his 80s.) Many people are starting businesses or entering a second career in the second half of their lives.

We may not learn the same way as when we were younger, but years of accumulated knowledge and experience — plus a willingness to bend the rules — adds richness to new endeavors. With more opportunities to learn such as online courses and travel, people of all ages can continue to challenge themselves throughout their lives.

Myth #6: Older adults don’t contribute to society
Chances are you know people who are as busy in “retirement” as they were when they worked — or people who don’t plan to retire any time soon. Experts say it’s a myth that older adults aren’t productive members of the community and the workforce. Many people are starting a business later in life or exploring a new career, and older adults have higher rates of volunteering than their younger cohorts.

Financial pressures aside, there are more options for older adults to stay active and engaged than ever before.

Myth #7: You’ll stop having sex
Everyone’s experiences are a little different, but results of a recent Canadian poll show the majority of older adults are still interested in sex and remain sexually active.  Another bonus: sex has many health benefits, including lower blood pressure and a healthier heart.

Myth #8: There’s nothing you can do about physical decline
True, we start to lose muscle mass and bone mass as we age — but that doesn’t mean frailty is inevitable. Experts note that most people don’t develop osteoporosis, and a sedentary lifestyle is more to blame for weight gain, loss of strength and future mobility issues than the aging process. We can stay active in the future by being active now because exercise is important for maintaining muscle mass, bone mass, strength and balance — all of which can reduce the risk of a disabling fall.

If you haven’t been active all your life, it’s never too late to start. A  British study found that people who become active in their 50s still enjoy many heart-healthy benefits. Being active is the best way to stay active as you age, say experts.

Of course, exercise isn’t the only lifestyle change that makes a difference as we age. Quitting smoking cuts disease risk within a short time frame — and a healthy diet, stress management and drinking in moderation make a difference too.

Overall, there are many things we can’t change about the aging process — but the message from experts is we have more control than we think. We can’t change the fact that we will grow old, but we can influence how we age and our attitude towards the process.