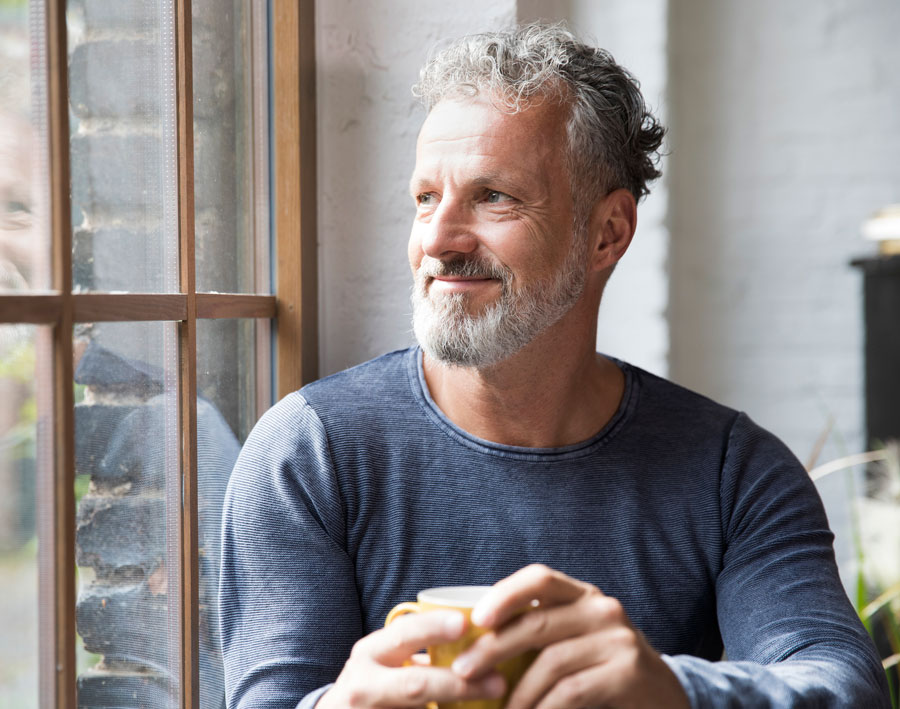 The recent death by suicide of chef, author and TV host Anthony Bourdain illustrates just how devastating depression can be. In fact, depression in boomer men has become a silent epidemic. It‘s time we give it a voice.

In Canada, men account for four out of five deaths by suicide.1 What’s more, suicide rates peak in Canadian men ages 40 to 50, reports the Canadian Association for Suicide Prevention (CASP).2 Global suicide rates among this demographic are even higher than reported rates of depression. How could this be?

Why Depression in Men is Overlooked

Depression in men often goes undetected and untreated. Stigma is still prevalent in this population, and many are reluctant to seek help due to feelings of powerlessness and vulnerability.

Boomers grew up with notions of traditional masculinity, the idea of being the provider and protector, explains Dr. John Oliffe, professor in the school of nursing at UBC and lead investigator of Men’s Health Research. “Admittedly, we would clearly argue those models have changed,” he says.

But boomer men are still aligned to the idea that they should self-manage, and the notion of asking for help is often viewed as contradictory to traditional male behaviours.

Diagnostic methods are also outdated. We tend to assess depressive symptoms that may be more commonly presented by women, Oliffe points out, such as sadness and crying. “But key indicators of depression in men are often ignored,” he says. These include irritability, aggression, overuse in alcohol and over-involvement in sports and work.

There is never one single explanation for depression; it’s often a combination of biology and life circumstances, Oliffe explains.

As boomers approach the end of their careers, stress in the workplace is becoming an increasing risk for depression. “Job insecurity is quite high,” Oliffe says, referring to the inherent pressure on boomers to stay at work longer due to increased age expectancy.

Elevated divorce rates are also a factor. “Men really take breakdowns in their primary relationships pretty hard,” Oliffe says. “And that can be the source of great discontent and depressive symptoms as well.”

Supporting the mental health of our communities begins with a simple conversation. “The best way to break away from the stigma of depression and suicide is to talk about it,” Oliffe says. “The Bell Let’s Talk campaign is great because it gets people talking.”

Men’s Health Research, which Oliffe co-founded with Dr. John Ogrodniczuk, has been heavily involved with many different campaigns. Thanks to funding from Movember, the program launched its independent exhibition called Man Up Against Suicide, which gives survivors of suicide loss or suicide attempt the opportunity to express their personal stories with the goal of sharing hope and resiliency to help prevent suicide.

Our natural response to someone with depression is to encourage them to “just get back on the bike,” Oliffe says, but nothing could be less helpful.

Instead, we need to focus on giving the men in our lives permission to talk about how they’re really feeling. “You’re limited in your ability to solve the problem, but you can be there to help move him toward a self-management pace,” Oliffe says.

This might be as simple as suggesting exercise, which has been proven to ease symptoms of depression. Try offering to go on regular walks together. In addition, social support has been found helpful in treating depression in men. It is also useful to direct them to online resources, such as ManTherapy.org.

“Ultimately, depression for a lot of people is potentially chronic illness, so you want a place where guys can look for the triggers and know what the triggers are and then put some strategies in place for staying well,” Oliffe says.

At the same time, you should be prepared for a crisis, he adds. CASP offers online resources and a map of crisis centres across Canada in case of emergencies. If someone you know is in danger, you should not hesitate to reach out for expert assistance. Go to suicideprevention.ca to learn more.