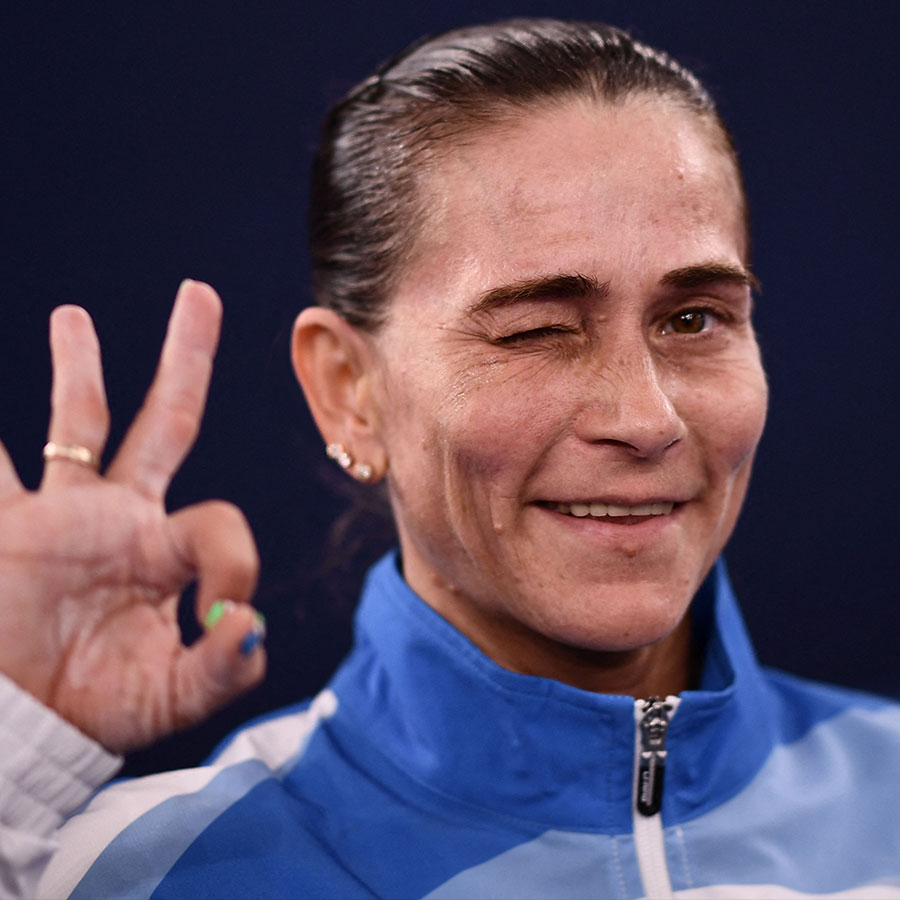 Uzbekistan's Oksana Chusovitina poses after competing in the artistic gymnastics vault event of the women's qualification during the Tokyo 2020 Olympic Games at the Ariake Gymnastics Centre in Tokyo on Sunday. Chusovitin has competed in eight-straight Olympics, a record for women's gymnastics. Photo: Loic Venace/ AFP/Getty Images

Oksana Chusovitina, a 46-year-old gymnast from Uzbekistan, competed in her eighth-consecutive Olympic Games on Sunday, extending her own record for most Olympic appearances by a female gymnast that she originally set at the 2016 Games in Rio de Janeiro. She is also the oldest female gymnast to ever compete at the Olympics.

Chusovitina, who won her first Olympic gold five years before current gymnastics sensation Simone Biles was born — says she tries not to pay attention to her age.

“Gymnastics has enough numbers,” she told Sports Illustrated ahead of her final Olympics appearance. “I don’t need to look at my age.”

Chusovitina fought back tears as her career came to a close Sunday. Her vault, which fell short of qualifying for the Olympics gymnastics final with a 14.166 score, drew a standing ovation from the crowd and fellow gymnasts in attendance.

“It was really nice,” she said after her final appearance. “I cried tears of happiness because so many people have supported me for a long time.”

Chusovitina’s illustrious Olympic career began in 1992 when she competed with the Unified Team — made up of athletes from the former Soviet Union — to win her first gold.

She competed for Uzbekistan next but, in 2002, when her son was diagnosed with leukemia, gymnastics competition became a necessity to pay for his treatment. She moved to Germany, where her son received treatment and, after becoming a citizen, earned a silver medal for the country at the 2008 Olympic Games in Beijing.

“If I had to go back, I would not want to repeat the time when my child was ill,” Chusovitina told CBC. “But all of the other moments, I would gladly repeat.”

Those moments add up to a legacy that reflects not only her longevity, but influence in the sport. In 2018, she became the oldest gymnast to medal at the Asia Games. She’s also won four gold medals at the world championships (with 11 world championship medals overall) and has had five skills named after her in the International Gymnastics Code of Points, including two on vault, two on uneven bars and one eponymous skill on floor exercise.

The mark she’s left on the sport was also reflected by the tributes that poured in for her on social media.

Aly Raisman, a retired Olympian who last competed in the Rio Olympics, took to Twitter to share a video of Chusovitina from the 1992 Olympics.

“This is Oksana Chusovitina 8th Olympics!!” Raisman tweeted.”No words to describe how impressive that is. Forever an icon. Wishing Oksana the best of luck! I’m so excited to watch.”

Spanish gymnast Marina González Lara also snapped a photo with Chusovitina, commemorating her for her “constancy, courage and above all breaking stereotypes.”

Team USA also made sure to commemorate the historic moment with an Instagram pic along with a quote from Chusovitina herself.

“The (Team USA) women were lucky enough to get a photo during training with Oksana Chusovitina, as she prepares to compete in her record-extending 8th Olympic Games! As she says, “I only got better, like fine wine,” the caption reads. “Congratulations on a remarkable career!”

After saying she would retire following the 2012 Olympics, Chusovitina — who was inducted into the Gymnastics Hall of Fame in 2017 — said that this time her retirement is final. Now, the Olympic-record-setter says she’s ready to make up for lost time with her family.

“I’m 46 years old,” Chusovitina said. “Nothing is going to change my mind. My son is 22 years old and I want to spend time with him. I want to be a mom and wife.”

In an Instagram post bidding a final adieu to her life as a professional athlete, she said she can look back at her career with no regrets.

“There were tears of joy and tears of grief, but I don’t regret it for a single minute! My sports life has been great and most importantly, I have you,” the caption reads. “Your love and support is the most invaluable wealth in my life. Thank you for everything.”