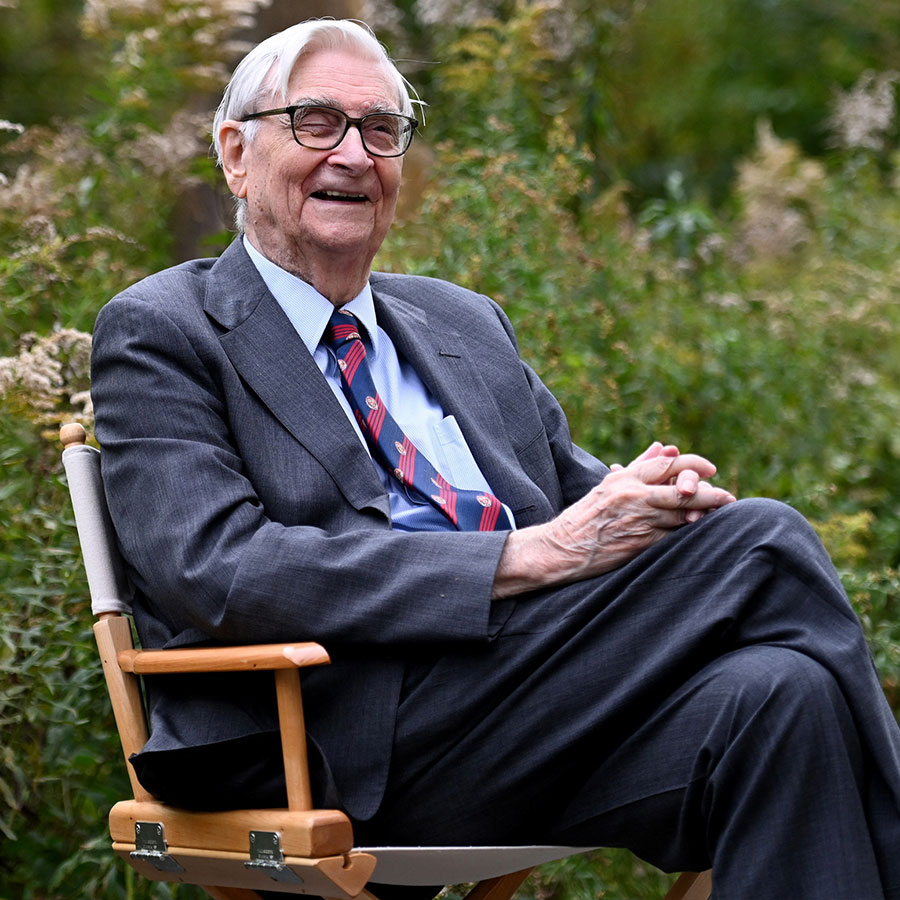 Edward O. Wilson, a 92-year old naturalist hailed as the Darwin of the 21st century, is calling for a global effort to address climate change and the extinction of plant and animal species on our planet. Photo: Reuters

The Harvard University scientist who has called for setting aside half the planet as a nature preserve says the slope of human history will always be downward unless there is global cooperation to save existing species.

Edward O. Wilson, a 92-year old naturalist hailed as the Darwin of the 21st century, said humankind is not too polarized to save the planet, even as some of the world’s biggest polluters drag their feet on cutting carbon emissions and arresting global warming.

He sees preventing catastrophic climate change — the aim of U.N. climate talks starting in Scotland on Sunday — and saving biodiversity, or the variety of plant and animal species in the world, as two initiatives that must happen together.

“This is the most communal endeavour with a clear definable goal that humanity has ever had and we need to get the kind of cooperation and ethical harmony and planning in order to make it work,” Wilson told Reuters in an interview outside Boston on Oct. 21.

“Otherwise, the slope of human history will always be downward.”

Today, species are going extinct at a rate not seen in 10 million years, with around 1 million currently on the brink. To limit the loss, the United Nations has urged countries to commit to conserving 30% of their land and water — almost double the area currently under some form of protection — by 2030.

The so-called “30 by 30” target is in part inspired by Wilson’s Half-Earth Project. First outlined in 2016, it calls for protecting half the planet’s land and sea so there are enough diverse and well-connected ecosystems to reverse the course of species extinction.

“The point is that human nature has not changed enough. Our strongest propensities of a social nature tend to disfavour the lives of most other species,” Wilson said.

Humanity continues to solve problems by burning materials — coal and oil — left behind by ancient organisms, Wilson said, decrying the continued exploration and burning of fossil fuels, which amplifies the destruction of biodiversity.

The Group of 20 rich countries remain divided over phasing out coal and committing to limit global warming to 1.5 degrees above pre-industrial temperatures. G20 nations account for 80% of global emissions, but big polluters such as China and India have also so far dug in their heels.

He is also the world’s foremost authority on ants, of which he has discovered over 400 species. He has written two Pulitzer Prize-winning books and popularized the term “biodiversity”, leading to a movement to preserve all species on the planet while safeguarding against humankind’s domination of natural resources. He has worked at Harvard for 70 years and still puts in time as a curator in entomology.

His trajectory as an entomologist — someone who studies insects — was set at age 10, when he spent hours in the woods of Rock Creek Park in Washington D.C.

“I already had a serious library from my collection of bugs and butterflies,” Wilson recounted during the interview.

A highlight of his career would come years later when he climbed more than 13,000 feet (3,962 meters) to the center of the Sarawaged Range in Papua New Guinea.

He said he owes part of his adventuresome spirit to his great-grandfather, William “Black Bill” Wilson, who piloted a steam ship during the U.S. Civil War. He was captured and imprisoned by Union troops for trying to move arms and other supplies to the Confederacy.

Wilson is a natural storyteller and his accessible writing style is on full display in “The Ants”, a 1990 book he wrote with Bert Holldobler. The monograph is more than 700 pages and weighs more than 7 pounds (3.2 kg).

He said one of his greatest achievements was working out how ants communicate danger and food trails, for example, by emitting chemicals.

Now living in a retirement community in a suburb of the northeastern U.S. city of Boston, Wilson continues to write and is working on a book about ecosystems.

Despite his love and fascination of ants, he waves off any suggestion that humans should model themselves after their traits or those of any other species as a way of improvement.

“I’m going to say something daring,” Wilson said. “To follow the ethics and behaviour of most other species would lead us to even more warfare over (resource) utilization …”

Still, he is optimistic humankind will set aside more space than it has in the past to save the rest of Earth’s biology.

“It will be one of humanity’s proudest achievements,” Wilson said. “If we fail to do it, and a large portion of the biological diversity of the world is allowed to be exterminated, for all of the generations to come that carelessness will be regarded as one of humanity’s greatest failures.”