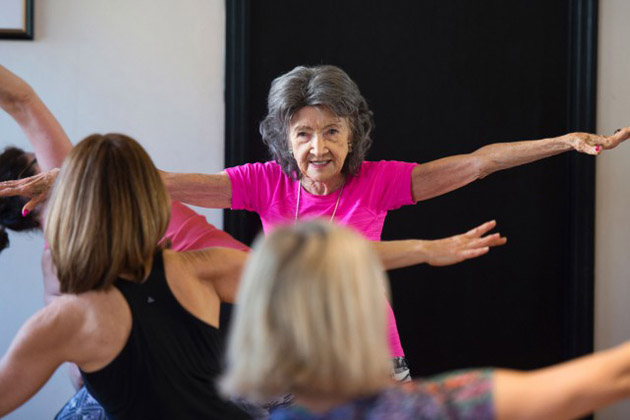 When this yogi and ballroom dancer (who once marched with Gandhi) offers us some words of wisdom, we listen.

If you think you have an idea of what 99 looks or feels like, Täo Porchon-Lynch likely doesn’t fit the bill.

She’s the world’s oldest yoga instructor and can contort her body into poses that would leave 20-year-olds struggling and gasping for air—and that’s just her warm-up for the day.

After teaching yoga class in the morning, Porchon-Lynch heads to her ballroom dancing class where she keeps pace with a partner 70 years her junior. Fuelling her unparalleled physical energy is a positivity she wakes up with each and every morning. “This is going to be the best day of my life,” she tells herself daily.

However, yoga and dancing are only the latest additions to her already impressive legacy. Porchon-Lynch is one of the few people still alive who can claim they’ve marched alongside Mahatma Gandhi—and she helped Jews escape the Nazis in France during the Second World War.

As a former model, Porchon-Lynch even now—approaching the century mark—refuses to wear anything but high heels. And, as far as her age goes, she simply doesn’t believe in limitations. “Never say, ‘I can’t do something.’ There’s no such verb,” she says. “The verb is to be ‘able.'”