Tech Out Your Ride! 4 New Features That Will Make Life Easier Behind The Wheel 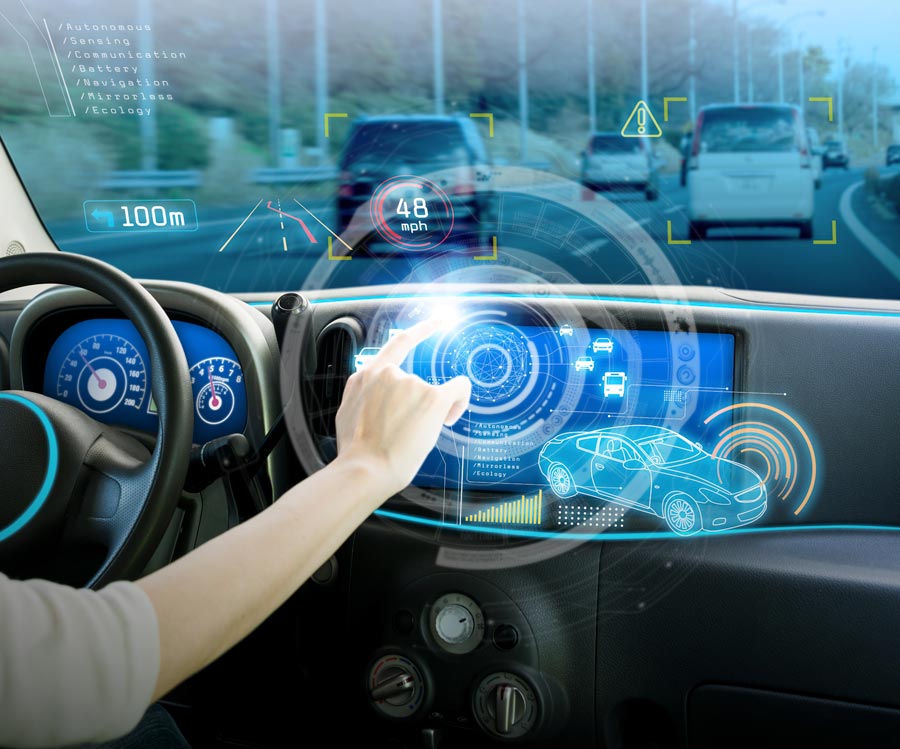 If you thought blind spot sensors and rear cameras were the epitome of in-vehicle technology, wait until you climb behind the wheel of new models packed with high-tech advancements to make your drive safer and more entertaining, with hands-free access to information, navigation and communication.

In other words, the “connected car” is here.

Here, a look at some examples of the latest in emerging automotive tech — and what’s coming down the road.

While automakers still offer their own infotainment system, many are allowing drivers to use what they’re already most comfortable with: their smartphone.
Both Apple’s CarPlay and Google’s Android Auto make your car’s dashboard look and feel more like your smartphone’s screen.

With CarPlay, simply plug in your iPhone and put it away as it’s charging up. Now your vehicle’s dashboard will resemble your familiar iOS home screen, showing many supported first-party apps like Phone, Messages, Maps and Music along with a growing selection of third-party apps as well.

For example, you can play music from Spotify or TuneIn Radio. Press the push-to-talk button on the steering wheel to activate Siri, your personal assistant that resides on your phone, and give a command or ask a question like “Read me my texts,” “What’s the weather like tonight?,” “Take me to 123 Main Street” or “Play Led Zeppelin.” When not driving, you can use the large app icons on the dashboard screen.

Similarly, Google’s Android Auto first has you connect your Android smartphone and then when you want something, press the button on the steering wheel, which activates Google Now.

You’ll have access to all your contacts, messages, music, maps, and other info all while keeping your eyes on the road and hands on the wheel.

BMW is readying its AirTouch gesture-based control system that lets the driver choose items on the screen by simply pointing, waving and pushing their hand towards the content.

Tom Cruise in Minority Report, eat your heart out!

In other words, your car is now a password-protected Wi-Fi “hotspot” that allows up to seven devices to join for Internet access. And it’s not just for the pricey premium vehicles, either.

In fact, all new Chevrolet models ship with this feature, even the entry-level Chevy Spark starting at under $10,000.

Drivers can access music, podcasts and audiobooks from their favourite app hands-free. Your significant other in the passenger seat can browse the web on their device and pick up email.

And perhaps most importantly, kids or grandkids on their tablets can stream Netflix or play an online game of Fortnite in the backseat.

Vehicles with integrated Wi-Fi offer a much better signal than your smartphone, largely due to a powerful antenna on the roof. Plus, you don’t need to use up the precious data provided by your phone and it won’t drain your smartphone’s battery as much.

With Chevy models, data packages start at a reasonable $10/month, plus there are no roaming charges if you want to pack the family up for a road trip through the U.S. You can also get a daily data package if you’re just doing a day trip up to the cottage.

This 4G LTE hotspot feature also works up to 50 feet outside of the vehicle, in case you want to beef up your tailgate party, cottage getaway or “glamping” adventure.

Given the fact human error accounts for more than 90 per cent of road accidents, perhaps we ought to rely more on our vehicles to help keep us safe.

That’s the idea behind “semi-autonomous” cars. As the name suggests, the vehicle assists the driver but doesn’t take complete control (“autonomous,” or fully self-driving vehicles, are coming in a few years, though).

Adaptive cruise control is an example of semi-autonomous technology, where vehicles equipped with cameras, radar, sonar, and infrared sensors slow down if they get too close to another vehicle (or even pedestrians at slow speeds in some vehicles) and can apply gas for you too. Many vehicles can also keep you in your lane, such as Nissan’s ProPILOT Assist technology or Cadillac’s Super Cruise.

Similarly, the latest software update for some Tesla models let the vehicle automatically steer down the highway, change lanes, and adjust speed in response to traffic. And once you’ve arrived at your destination, the car scans for a parking space and parallel parks on your command.

Finally, because many cars are now on the “grid” so to speak, many auto makers are supporting apps on a smartphone, tablet or smartwatch, to give you remote access to your vehicle.

Many car companies now have an app that lets you remotely lock or unlock the vehicle, remotely start your car, or start and stop the alarm. In other words, consider this app an extension of your key fob, which works at much greater distances via cellular connectivity.

Some apps can send a destination address from your phone to your vehicle before you climb behind the wheel and start the navigation. It can tell you the fuel level in your vehicle, what your range is, oil life, tire pressure, and for electric vehicles, the range remaining.

Some car companies support smart speakers, like Amazon Echo or Google Home, so you can use your voice to ask to lock and unlock the vehicle, start and stop the engine, ask for fuel levels, and more.

A few automakers have this tech in the vehicle, too. Toyota, for example, is letting drivers and passengers talk to “Alexa” to control things in the car as well as smart home devices like the lights, temperature via your Wi-Fi thermostat, garage door and more. The future is here!