Zoomer-Friendly: A Watch That, Quite Literally, Watches Out For Its Wearer 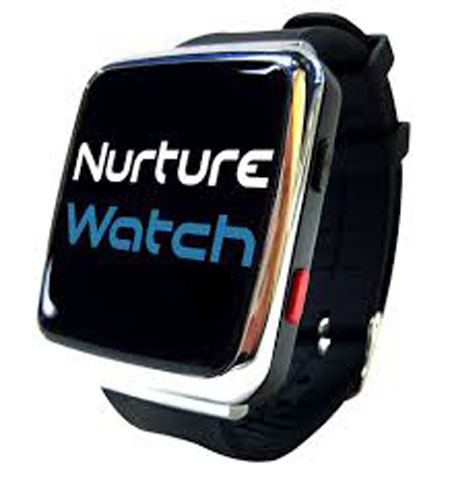 Agent 86 on spy spoof Get Smart had some pretty nifty gadgets at his disposal. Half a century later, we’re not using shoes to make calls — yet! — but walkie-talkie-like watches are here.

Strap on a Nurture Watch and use the two-way calling feature anytime to connect with any three users linked through the Nurture Watch app. Come in, Agent 99! And in case of an emergency, you can initiate a distress call to those contacts simply by tapping the smart watch’s SOS button.

The wearer can also grant a little spying — if you will — by family, friends or caregivers using the app. Location, heart rate and even step count for the day can be shared. And in case of a fall, the watch will send an automatic text alert to the same three priority contacts.

Of course, the watch’s bells and whistles are really in service of peace of mind — for the wearer and their loved ones.

Toronto-based founder Jacob Moshinsky was inspired to develop the watch after an uncle of his died of a heart attack. His uncle lived alone and by the time family found him, it was too late. He thinks alert devices can carry stigma and that people could be better served by and more apt to use something more discreet.

” I don’t want people to call it a ‘Geezer Alert,’ – it’s a fashionable watch. It tells the time both in analog and digital mode.”

Of course it has voice and data connectivity, too, and works over WIFI. But unlike other smart watches, Moshinsky opted to keep the functionality simple.

“We don’t want to overburden the end user. Especially, say, in the case of someone with Alzheimer’s or dementia.” In the event family members are concerned about a loved one’s coming and going, they can set a ‘Safe Zone’— from two metres to one kilometre — to alert them when the wearer leaves the area or when, say, they arrive at a destination such as their doctor.

And there are other add-ons and features in development.

One that Moshinsky hopes to get to market early next year is a “smart” pill-taking wheel.  Connected to the watch and app, it would remind a wearer to take their medication and automatically slide open to the slot containing the scheduled pills. A report would be sent to the app once the pills had been taken.

He’s also working with a team in California to hone the heart rate monitor with “preventative thresholds.” If changes to heart rate are deemed concerning, the wearer and app users could be alerted.

Currently, the watch is not connected to 911 dispatch but Mochinsky is in talks with emergency service providers.