Happy Anniversary to the Telephone: A Device Used More Today for Apps & Texts than for Talking 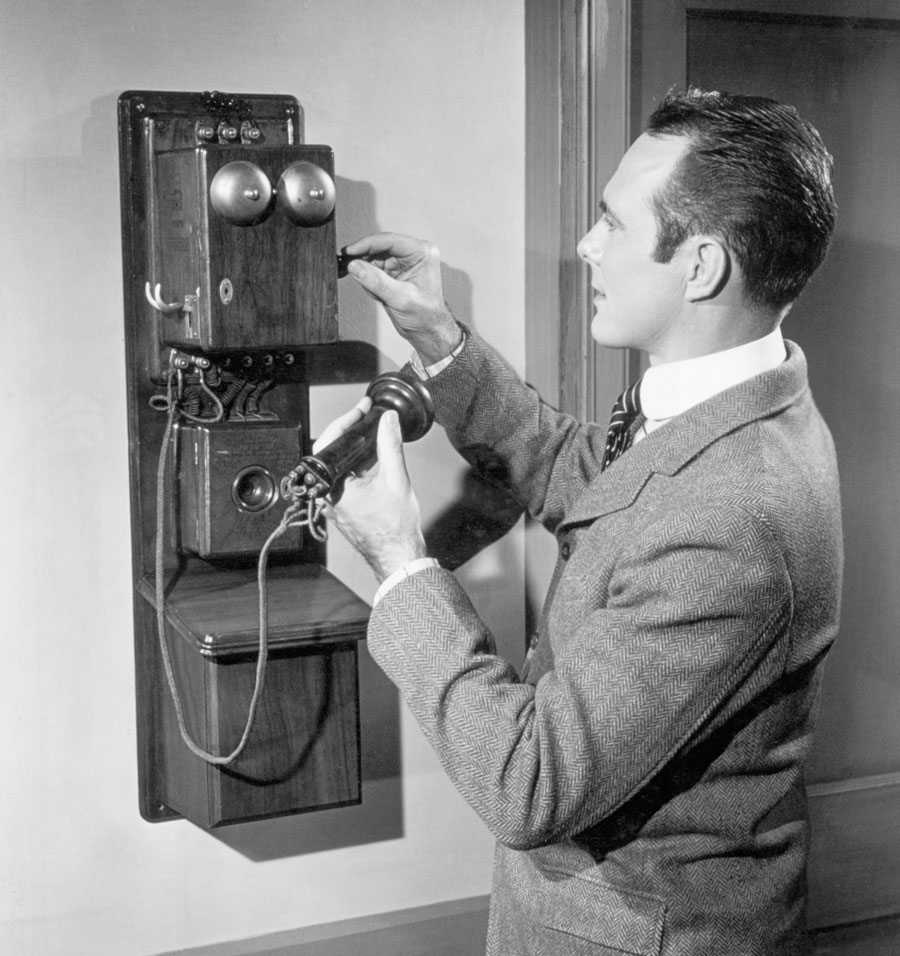 One of the most popular memes recently, with nearly 800,000 views on YouTube alone, involved two teens being given four minutes to figure out how to call a number on a rotary phone.

Yes, they were stumped. And admit it, you encountered this video on social media and took some satisfaction in the fact that there was at least one piece of technology on this planet that you understood better than a teenager.

March 7 marks 143 years since Alexander Graham Bell received his patent for the telephone, and I have my own previous-century version of those teenagers’ experience. In the late ‘70s, I was driving from my then-home in Thunder Bay to start the fall term at Ryerson, and somewhere between Schreiber and Terrace Bay, my car’s transmission ceased to function.

I hitchhiked ahead to the nearest general store, where the phone was a contraption out of an old movie – or like the one Sam Drucker used in Green Acres and Petticoat Junction. It was a large, black wall phone with a horn in the middle that you talked into, a crank on one side, and a wire-tethered earpiece on the other. This particular “Sam Drucker” must have been getting tired of telling people how to use it, because there were written instructions on the wall.

As I recall, the crank got the attention of Mabel, the local operator, who would tie me in to Denise, the long distance operator, who would connect me with mechanic Stan Spadone, the owner of what may have then been the only garage in Schreiber, Ontario.

Like my last glimpse of a hot-lead printing press in action, that experience was my technological tie to a time before me, when dinosaurs roamed the Earth.

But what was interesting in the evolution from the Hooterville phone to the rotary to the push-button to the wireless hand-held to the flip-phone, was how little the function of the device had changed. It reminded me of when I asked a car-nut friend what would most surprise a driver from 100 years ago if he saw a car today. “He’d be surprised that we’re still using internal combustion engines,” he said.

All that changed, of course, in 2008, with the introduction of the iPhone. More on that in a bit.

March 7 is commemorated as an unofficial American observance (Yes, we claim the Scottish-born Bell as Canadian, but he only lived here a year in his early ‘20s before moving to the U.S. He did die in his Nova Scotia summer home though).

And three days after receiving his patent for “transmitting vocal or other sounds telegraphically,” Bell conducted his famous experiment in which he transmitted the words, “Mr. Watson, come here. I want to see you.” His assistant Thomas Watson was in the next room, so he could just have shouted for him, but it was a legendary event nonetheless.

Or more like the beginning of the end. A decade ago, 95% of homes had landlines. That number has dropped a fifth and plummeting fast. Meanwhile, about 90% of Canadians have cellphones – mostly smartphones.

And what are those smartphones used for? Texting, Googling, paying bills, depositing EFTs in your bank account, buying meter time on a parking app, unlocking doors using Kevo, playing games, listening to music, indulging in social media, answering emails… pretty much everything BUT talking on the phone.

Voice calls have been plummeting by cellphone users since 2007. In 2013, data usage surpassed voice usage on North American cellphones (in Japan, that happened in 2011). Less than a third of high-schoolers say they use their cellphones to make voice-calls, whereas – believe it or not – they send or receive an average of 100 texts a day!

There are aspects of the old-school phone experience that I definitely will not miss. Expensive long distance for starters. When I graduated, my then girlfriend and I landed newspaper jobs 1,500 miles from each other, in Winnipeg and Ottawa respectively. We decided to try to keep the long-distance relationship going, with the result that we both got hit with $150-a-month phone bills. In 1980s dollars. (No, that relationship didn’t last).

Compare that to when I had an assignment a couple of years ago to follow The Amazing Race Canada as “embedded press” to Vietnam. I talked to my wife daily on Facetime for free (and saw her as well, just like on The Jetsons). Even her mom, who’s in her 80s, prefers using Facetime to see us and her grandsons, if they happen to be home.

In response, for those still using landlines, long-distance charges have practically become a thing of the past, with most plans including it gratis (along with a “Thank You!” fruit basket for your decision to pay the extra money – okay, I made that last part up).

So as more and more people order their dinner delivered from restaurants via third-party apps, with no human interaction other than the guy who shows up at the door, let’s take a second to remember Alexander Graham Bell. We hardly knew ye. And you certainly wouldn’t know us anymore.