It Takes A Village: The Role Our Communities Play in How Old We Feel 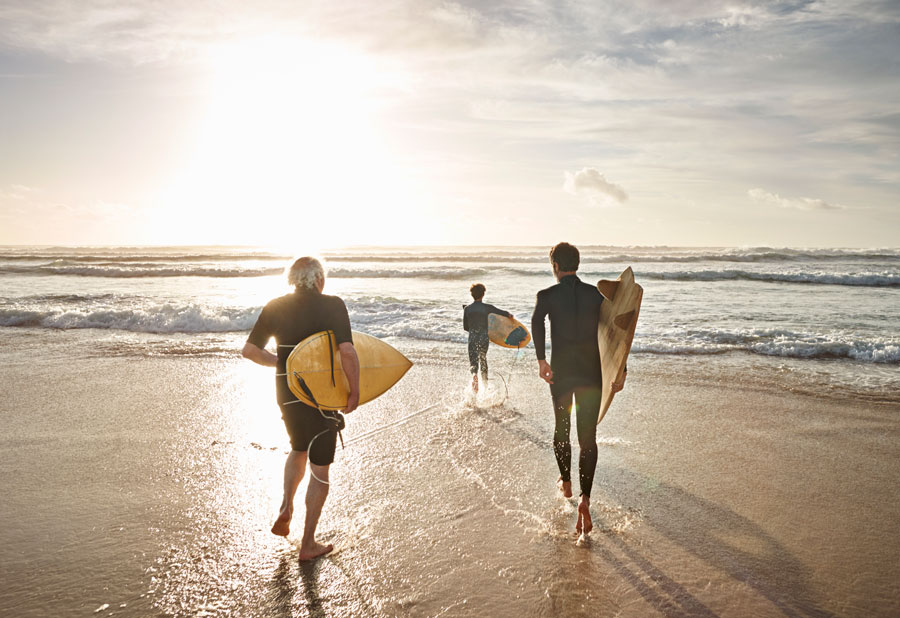 If you ever find yourself wandering through the warm, mountain-lined fields of El Pescadero in Baja California Sur, Mexico, and hear piercing and prolonged screams emanating from the cliffs above, don’t fret. The screaming isn’t born of any hostile physical encounter or animal attack. It’s simply a group of elders releasing their inner rage and frustration over the constant and merciless crush of ageism on both their personal and professional well-being. Or, as the locals might say, “those screaming old people.”

That’s not even a joke. The nearby Modern Elder Academy — described in the New York Times as a retreat for people in the tech industry who feel increasingly isolated due to ageism and made to feel they’re too old for their field — is situated nearby and offers activities such as sunrise shaman ceremonies, tossing pieces of paper containing ageist phrases into a fire and, yes, sitting on a cliff and venting your frustrations via primal scream.

Also not a joke is the fact that the “elders” in question include people as young as 30 years old who can’t keep up with the pace of advancements in the tech industry and, as a result, feel out-paced, out-dated and irrelevant compared to younger employees.

According to the Times piece, a former hotelier named Chip Conley, who was 52 when he went to work at Airbnb in 2013 and got called “the elder” by his younger co-workers, founded the resort. As the story notes, “the conventional wisdom is that tech jobs require a limber, associative mind and an appetite for risk — both of which lessen with age. As Silicon Valley work culture becomes American work culture, these attitudes are spreading to all industries. More workers are finding themselves in the curious position of presenting as old while still being — technically, actuarially — quite young.”

Which means that, while increased longevity has turned 50 into the new 30, in some industries 30 can feel like the new 110.

You’re Only As Old As You Feel, or Are You?

In an Atlantic article written by noted geriatrician and epidemiologist Linda P. Fried, who also serves as Dean of Columbia University’s Mailman School of Public Health, she recalled her early years as a geriatrician. During that time she learned the invaluable lesson that, “many of the ills associated with aging were worsened—or even created—by the lack of meaning and purpose in people’s lives. Too many of my patients suffered from pain, far deeper than the physical, caused by not having a reason to get up in the morning. Many of my patients wanted to make a difference in the world but, finding no role for themselves, were treated as socially useless and even invisible.”

And if you think it’s simply a morale issue, think again. Studies have shown that ageism can take a toll on your health, including an EverythingZoomer.com article that notes, “people who are too negative — or have assimilated more negative age stereotypes from their culture — pay for that bias on a physical level.”

It seems, then, that perhaps we aren’t simply as old as we feel, but rather as old as we’re made to feel by our community. So what, then, happens when a community eliminates negative stereotypes around aging and offers support instead?

Take Japan, for example, home to the world’s oldest population. According to a new study, that same aging population actually tops the world for feeling younger than their biological age.

The study, which appeared in the journal The Lancet Public Health, began by establishing the global average for “age-related disease burden” faced by a 65-year-old, using data from a Global Burden of Disease study. Then, they analyzed individual data from 195 countries and territories between 1990 and 2017 to calculate at what age people in those places experienced the average 65-year-old’s level of age-related disease burden. Japan and Switzerland topped the list, with people in both countries on average reaching age 76.1 before they started “feeling” 65. In other words, they feel, on average, 11 years younger than their biological age. Canadians, on average, reach their early 70s before they start feeling 65 – not too bad. Papua New Guinea, however, came in last out of the countries measured, with residents feeling 65 by the time they’re 46.

While this study takes into account physical and health-related data, there is a tie-in to the important role community plays in healthy aging. A 2018 AARP story highlighted how Japan, which tied Switzerland for the top spot in the above-mentioned study, makes a point of accommodating older residents rather than treating them as though they’re a burden. And a USA Today story from 2018 about countries with the longest life expectancy noted a key to Switzerland’s success in that area is their heightened sense of community. But perhaps most telling is a 2018 study about the best countries to grow old in, in which three of the five main metrics used pertained to community, including “Productivity and engagement: how many opportunities are there for elderly people to contribute to society,” “Equality: how fair life is to the elderly,” and “Cohesion: how socially supported elderly people are.” Japan placed among the top countries on that list as well.

On the Edge of the Cliff

So in the context of aging well, there might prove little difference between a 76-year-old retiree in Japan and a 30-something tech industry employee in Silicon Valley. They both require a sense of engagement, productivity, equality, the opportunity to contribute and a sense of support within their community — be it geographical or professional.

And given we know that making an attempt to feel younger literally affects the speed at which your brain ages, perhaps more community support and centres like Modern Elder Academy can help boost spirits and overall health surrounding aging. As well, more awareness and understanding that ageism isn’t reserved for any particular age and that a sense of feeling “old” has nothing to do with your birth certificate would be welcome too.

And if all else fails, it’s comforting to know that the option’s always there to simply walk out onto the edge of a cliff and scream.

How #ElderWisdom Will Help Tackle Ageism in Ontario

Seniors of Canada: A Project That Battles Ageism, One Photo At a Time