A Year of Pandemic Living: How COVID Completely Changed Life As We Know It 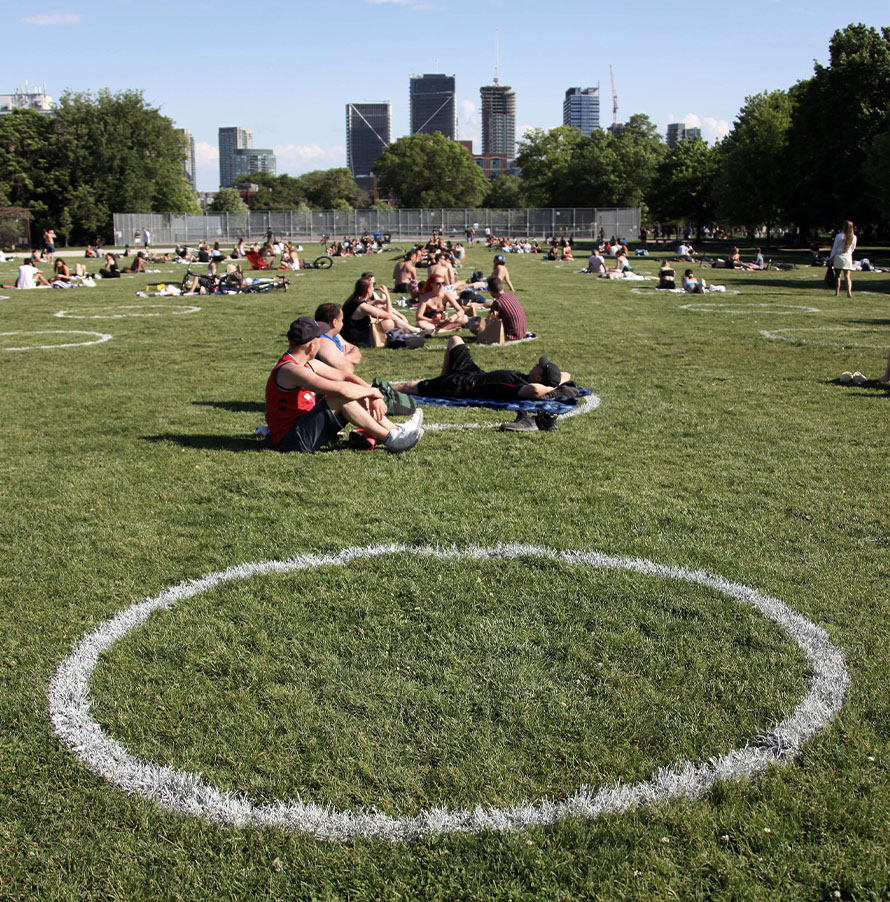 Marking a year since the WHO officially declared the pandemic, socially-distanced park outings are just one of the many ways our world transformed in a matter of 12 months. Photo: Yu Ruidong/China News Service/Getty Images

The timing of the World Health Organization’s declaration of a pandemic on March 11, 2020 could not have been more symbolic, coming a week before St. Patrick’s Day. What better way to say, “The party’s over?”

Jurisdictions reacted at different speeds, but in Ontario bars were ordered to shutter the day before the biggest party day of the year.

Putting a cap on green beer may have been no big loss. But the closures also included restaurants, theatres, public libraries, and various retail establishments. Big box stores resorted to curb service. Almost everyone followed protocols and wore masks.

Little did we realize how much our lives would change — in ways big and small — over the next 12 months.

First and foremost, there was, and continues to be, the toll on lives. For example, the tragedy of the wildfire spread of COVID-19 in long-term care homes for seniors was made worse by privately owned companies having staff work part-time at different facilities, to evade full-time pay and benefits. Money saved equals virus spread. Provincial governments had to step in to stop the practice.

And Prime Minister Justin Trudeau declared March 11 a national day of observance to remember “the tragic loss of more than 22,000 parents, siblings, friends, and loved ones.”

But in an era where both politics and society often seemed driven by a culture of narrow self-interest, the last 12 months brought an optimism that, perhaps, the notion that “we’re all in this together” might finally be self-evident.

You may feel encouraged by the efforts of most to follow protocols for the public good, or dismayed by defiant public no-mask events that gave us the term, “super-spreader.”

In fact, because of that mentality we’ll pretty much have to retire the expression “avoid it like the plague” because, as we’ve seen, many don’t avoid it at all.

For good or bad, “normal” will never be quite the same. But the future is always just a tweaking of the present. Even before the pandemic, people were increasingly working from home, especially in the “gig economy” where you could provide service to multiple clients remotely.

Virtual meetings, meanwhile, were already not uncommon. But by the end of 2020, the most common phrase in the English language may have been, “We can’t hear you. Unmute yourself!” (Zoom stock, by the way, shot from $107 a share in June to more than $340 as of this writing).

Of course, we quickly learned that the video-meeting platform also has the propensity to catch us in embarrassing situations, from people who forget to mute themselves when heading to the loo to the now legendary video of a lawyer accidentally trapped in a feline filter during court proceedings, prompting the hilarious never-before-uttered-in-court declaration, “I’m here live. I’m not a cat.”

Meanwhile, our day-to-day realities and mindsets shifted in other ways over the last year.

Baking became a widespread pandemic hobby, though many of us can’t imagine ever again eating a birthday cake after someone has blown across it to extinguish the candles.

We’ve also learned that, in a time of crisis like a pandemic, toilet paper becomes a priceless commodity. And when it comes to purchasing commodities, many communities increased their focus on helping local businesses over big chains — attempting to keep as many of them in business as possible.

However, Amazon, which held the hammer on both the goods we ordered to our homes online and many of the shows we watched while homebound, saw its stock quickly rise by 75 per cent. (Theatre giant Cineplex, by contrast, saw its stock value drop by 70 per cent).

But we are a social species and, thus, turned to some old-school media to allow us to occasionally get out of the house — like drive-ins. Drive-in movies made a comeback, but there were also drive-in concerts, and comedians performed drive-in shows, where laughter was replaced by appreciative honking.

And who could have imagined a time that sports stadiums would be filled with cardboard cutouts in lieu of fans, or virtual award shows where celebs beam in from remote locales (including their living rooms) to accept their honours?

Closer to home, having your car sitting idle for days or weeks on end, and not spending as much money on bars and restaurants, held a surprising benefit. A Scotiabank poll found Canadians spending 75% less on eating out, 81% less on entertainment, 58% on clothing and 41% on commuting. A quarter of respondents said they were diverting their sudden surplus to savings.

Of course, one person’s good news is another’s bad news, and it was encouraging to see the federal government step in with relief funding like CERB to soften the blow of what amounted to an economic shutdown. It is our money, after all. And if this didn’t qualify as a rainy day (or year), it’s hard to imagine what would. There was even speculation that relief funding could get us used to the idea of a guaranteed annual income.

And while we rightfully hailed frontline workers as heroes — from medical professionals to retail staff — the crisis also heightened the economic disparity among those who tended to be low-paid.

And then there were the conspiracies. Having people’s lives turned upside down by something they couldn’t see helped nourish a mindset where anything nefarious was possible, from Jewish space lasers causing wildfires to a cabal of Hollywood and government pedophiles/cannibals to a supposed nationwide conspiracy to “fix” the U.S. presidential election. Conspiracies have always been with us, but 2020 proved particularly fertile ground for feverish imaginings.

Maybe the various vaccines we’re signing up for can be the equivalent of a “reset” button. It sometimes feels like the urge to socialize is so strong, it’ll look like a Black Friday shopping mob in reverse when we’re released from lockdown protocols.

In the meantime, we meet in parks to celebrate birthdays in socially distanced handfuls. We have porch visits. And we use our smartphones for actual conversations.

A year later, we still have rights, we have responsibilities, and we have each other.