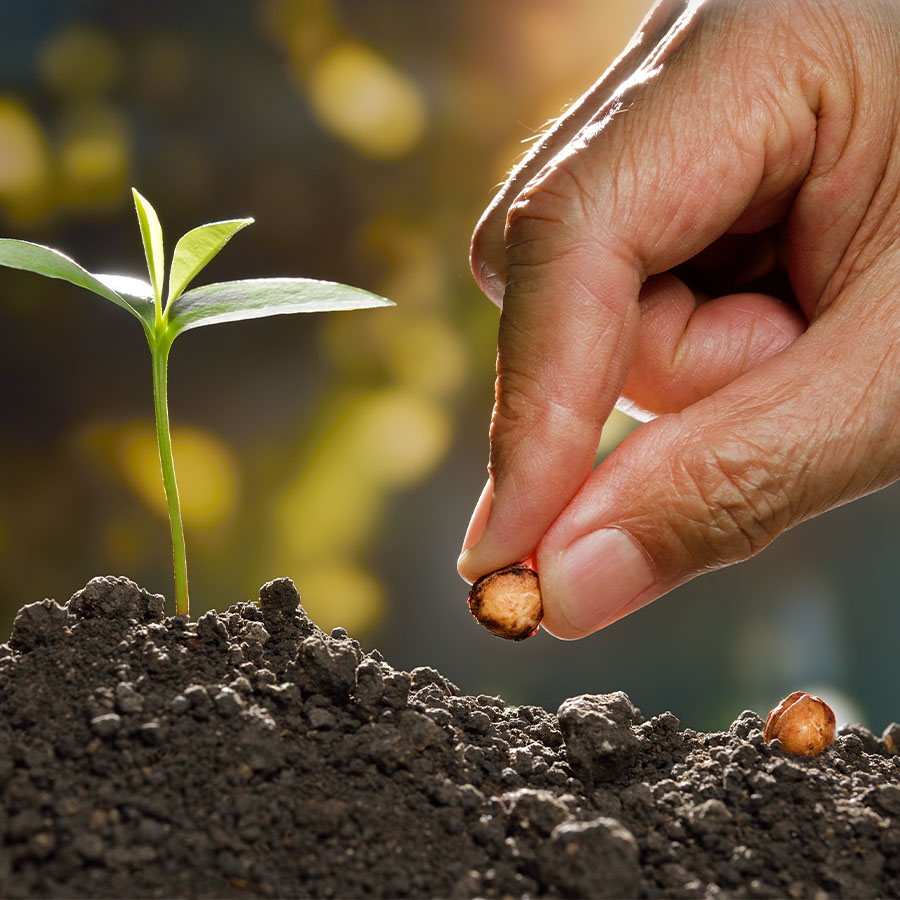 “All seeds are sacred, these seeds are connected to 10,000 years of human relationship to the land,” says Owen Taylor, co-founder of Philadelphia-based Truelove Seeds, who sells vegetable, herb and flower seeds that tell ancestral and regional stories. He adds, “seedkeeping refers to not just the saving of seeds, but also the keeping of seed stories, cultural information, traditions, recipes, rituals and so on.”

Taylor says many of the varieties in Truelove’s seed catalogue are seeds that farmers and gardeners have collected from others, through seed exchanges and family lineages. “Most of our growers are on their own search for their beloved varieties — and to provide an outlet for some of the crops from home,” he says. Seeds from Syria to the African diaspora, those that tell the story of Philadelphia’s history and a wide variety of other culturally important seeds are included in the catalogue.

Taylor started Truelove Seeds in 2017, after managing a private heirloom seed collection with over 4,000 varieties. He co-founded the company with Chris Bolden-Newsome as a way to collaborate with farmers in the food sovereignty movement. Their goal was to preserve and make available culturally important seeds while providing mentorship for farmers, an outlet for their seeds and an income stream.

Truelove Seeds uses a profit-sharing model so gardeners and farmers make 50 per cent of every packet sale. Taylor and Bolden-Newsome also host a radio show called “Seeds and Their People,” which explores stories of seeds and community.

Practices of seedkeeping vary, and each seedkeeper offers their own story and connection to the seeds. Their efforts can create a sense of home, reconnect communities with ancestral crops and preserve biodiversity and culturally significant crops for future generations.

Seedkeeping and Creating a Familiar Space

“You don’t know how many days you will live in the jungle, so you have to carry the seeds, you carry the seeds for planting and medicine,” says Naw Ta Blu Moo, an interpreter for the Karen refugee community, an Indigenous community from Myanmar, at Novick Urban Farm in Philadelphia.

The Karen grow crops such as chilis, cucumber, gourd, bitter melon and the sour leaf of the roselle plant known as chin baung ywet. All sourced from an informal network of seedkeepers and savers from Myanmar, who bring seeds with them to North America, or preserve them and share them within the Karen community in the United States. “The farmers want to do more, and plant more because it helps heal their community,” says Blu Moo.

Shwe Chit, who fled his village with his family and resettled in Philadelphia because of ongoing conflict in Myanmar’s Kayin State, has spent five years working at Novick Urban Farm, where Karen gardeners can farm plots of land. He says the first year of land preparation was a challenge, but the reward of growing crops is worth it. He now sells his crops, such as winter gourd and hot pepper, at the Novick Urban Farmstand in the summer.

Blu Moo says for the Karen gardeners, finding exact seeds for the community can be difficult. Sometimes, community members thought they had secured the right seed but were wrong — as was the case with chilies; when the fruit came up, it was a Spanish chili, not one from Myanmar.

Terese Gagnon has worked with Karen gardeners for more than a decade, and is the co-editor of the upcoming book Moveable Gardens, Itineraries and Sanctuaries of Memory.

She says cultivating plants from home is a way of creating a space that is familiar within a new and often alienating environment. “This includes having access to longed-for flavours, engaging in the physical work of gardening and getting to shape the landscape to have something that visually looks like home.”

In the Arctic town of Svalbard, Norway, an initiative critical to food security and seedkeeping enables seeds to be deposited for future generations.

The Svalbard Global Seed Vault is a seed storage facility housed in a mountain, where copies of seeds from around the world are kept to prevent both incremental and catastrophic loss of crop diversity. According to the Crop Trust, there are currently over one million seed samples in the vault, from nearly every country in the world.

Nations can deposit seeds from their genebanks to safeguard them from human conflict or natural disaster. Åsmund Asdal, the Svalbard Global Seed Vault co-ordinator, says that while nations may not be best friends, they co-operate in this important task to protect and preserve their seeds.

“Today, there are seeds from Russia and Ukraine on the same shelf. There are seeds from North Korea and South Korea. Even if countries are quite hostile to each other, they co-operate on this task to take care of the seeds.” The North Korean seeds are in seven wooden boxes made in North Korea, which contain seeds for cabbage, beans, barely and buckwheat, says Asdal.

Tiffany Traverse of Peace River, B.C., is sowing seeds of qwléwe, or nodding onion, and other Indigenous crops. She says nodding onion is often destroyed by urban sprawl and tourists trying to access trails to the river. She is carefully transplanting the qwléwe to safer places so they can once again thrive.

Traverse, originally from Secwepemcúlecw territory, was mentored by one of the leaders of the seedkeeping movement, Mohawk seedkeeper Rowen White.

She founded Fourth Sister Farm, where she works to provide access to healthy and culturally relevant seeds and foods, and uses traditional growing practices such as moon-phase planting.

“What I’m doing is I’m stewarding those seeds to be returned back to the nations or the people or the communities they are linked to,” says Traverse. She’s referring to crops such as beans, tomatoes and squash, which she grows and returns to their respective communities — which can include sharing, teaching about seed saving, growing and recipes.

This process can also be referred to as rematriation. “Rematriation,” says Traverse, “is to return the seed ancestors home to their peoples and communities.” She believes by keeping and sowing seeds she is asking: “How are we going to help each other out? How will we lift each other up and grow these seeds out and share them back into the community?”

Gagnon says much of the work is about having to make spaces of sanctuary within a time of precarity. “Seeds weigh nothing and are designed to travel great distances,” says Gagnon. “Seeds are important companions with which people make home and create a sense of continuity, a cohesion to life, even when forced to be on the move or perpetually in-between.”