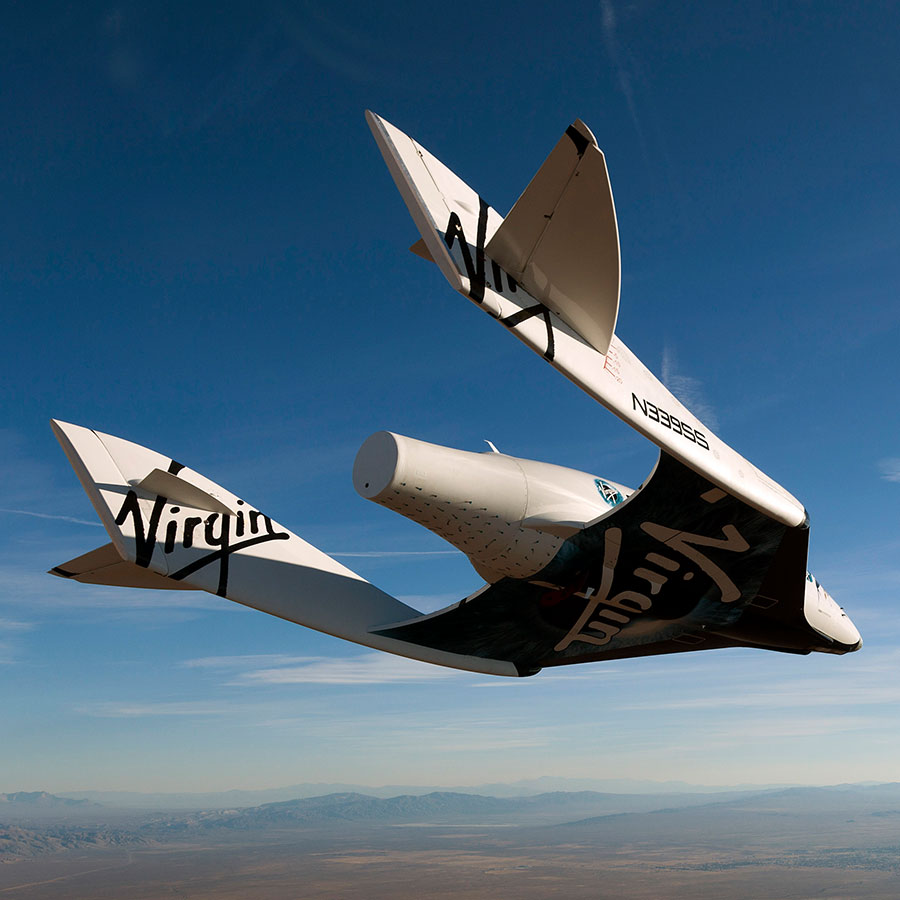 However you choose to identify the modern trio of billionaire space explorers — Jeff Bezos, Richard Branson and Elon Musk — the reality is that the Earth is simply too small to accommodate their whims any longer. There is no luxury sports car fast enough, no yacht big enough, no private jet lavish enough and no secluded property sprawling enough to keep their feet firmly planted on our planet.

And so they’ve turned their respective eyes to the stars, presumably gazing up at the night sky like children standing at the gates of a shiny new playground.

The billionaire space race is indeed off and running. Branson, 71, rode his Virgin Galactic VSS Unity spaceplane on a suborbital joyride on July 11.

And SpaceX, owned by Musk, 50, is, as Yahoo Finance noted, “the first private company to successfully launch, orbit, and recover a spacecraft, the first private company to send a spacecraft to the International Space Station, and the producer of the first successful vertical take-off and vertical landing orbital rocket.” Musk has also reportedly booked a future flight on Branson’s Virgin Galactic and hopes to one day colonize Mars.

And while space milestones — from the 1969 moon landing to the sights and sounds beamed back from the Mars Perseverance rover earlier this year —  tend to capture humanity’s collective imagination, the billionaire space race is utterly devoid of that magic.

It contains no “One small step for man, one giant leap for mankind” moment to be immortalized for generations. In 1969, the photo of Neil Armstrong walking on the moon for the first time — the lunar lander reflected in his helmet — set imaginations soaring. Today, the enduring image of space flight is Bezos in a cowboy hat and space suit, cackling like a kid who just rode his first rollercoaster.

It’s the personification, as Jacob Bernstein wrote in the New York Times, of a  middle-aged white man having a crisis:

“A dentist with a Lamborghini is a Bezos. So is anyone in commercial real estate who, having just embarked on his first extramarital affair, starts shaving areas of himself that should not be shaved. I turned into a Bezos the day I decided to try and pull off a fanny pack and a pair of bootleg Dior shorts.”

The billionaire space race is all really just one big pissing contest. I mean, Bezos’ New Shepard rocket even looked like a penis.

Rather than inspiring generations to greater heights, it’s the Amazonification of space travel: modern, fast and utterly disconnected from any sense of community. Not to mention the notion that it completely undoes the romance that comes with astronauts exploring new horizons.

As journalist Henry Mance wrote for the Financial Times, “Space travel amazed us when the astronauts were the fittest; it won’t have the same effect when they’re simply the richest.”

The Atlantic’s Marina Koren recently argued that “the criticism of space travel as frivolous is as old as the act itself,” adding that “paying attention to Earth and looking toward the stars are not contradictory acts, nor does one come at the detriment of the other.”

That point is debatable, as we’ll see, but, at the same time, when Armstrong, Buzz Aldrin and Michael Collins made that inaugural trip to the moon, it was an achievement in the name of science and the unending human desire for exploration (plus, a little bit of patriotic one-upmanship to boot). And while there’s a touch of that in the billionaire space race, it’s largely about expanding each individual’s personal brand.

Bezos, for example, is the world’s richest man, owner of everything from Amazon to The Washington Post. He’s a sort of Lex Luthor meets Dr. Evil figure — the bald super villain who spends billions on space travel while reportedly paying less than his fair share of taxes as the workers at his Amazon plants struggle with low wages and “unsafe, gruelling conditions.” And, of course, he’s haunted by the philanthropic ghost of his ex-wife, MacKenzie Scott. The couple divorced in 2019 and she donated more than $8 billion of her own fortune in the interim, with no plans of slowing down.

If anything, Bezos left Earth as a means of humanizing himself on Earth.

Following his historic flight, he donated $100 million each to activist and CNN personality Van Jones, whose Dream Corps organization helps reform the criminal justice system, and chef José Andrés, founder of the non-profit World Central Kitchen. He also announced what he called the Courage and Civility Award, which “recognizes leaders who aim high and who pursue solutions with courage and who always do so with civility.” That’s two not-so-subtle attempts to gain an indulgence for his corporate sins. Perhaps if he donates a few hundred million more, we can forgive him for wearing that stupid cowboy hat.

In the same way, Branson is a loveable rogue and business magnate known for adding his Virgin brand name to everything from record stores to bridalwear (Virgin Brides) — with varying degrees of success. He’s also made runs at travel speed world records — some of which he’s achieved — and cameoed in a slew of TV shows and films. In other words, he’s a master of self-promotion. And what gets you more press than being “the first person in history to have successfully tested out his own spacecraft”?

Then there’s Musk — the youngest of the three billionaires. On one hand, the Tesla CEO and founder of numerous other companies served as the archetype for Robert Downey Jr.’s industrialist billionaire Tony Stark in the Iron Man/Avengers films. Like Branson, he’s also no stranger to appearing in films and on television shows and even earned laurels for his May hosting gig on Saturday Night Live — during which he announced that he has Asperger’s syndrome and quipped, “I reinvented electric cars, and I’m sending people to Mars in a rocket ship. Did you think I was also going to be a chill, normal dude?”

While Musk hasn’t taken flight like Bezos and Branson, CNN reports that, “SpaceX is far ahead of both Virgin Galactic and Blue Origin in terms of orbital flight. The company has received contracts from NASA to resupply the International Space Station since 2012 and has brought crews to the station since 2020.”

On the flip side, Musk courted controversy for spreading misinformation about COVID-19, causing multiple SNL cast members to speak out against him ahead of his hosting duties. As well, it’s been reported that he boasts a history “of signalling to far-right figures” on social media. His companies have also faced allegations of racism and unsafe working environments. Oh, and don’t forget he and partner, Canuck musician Grimes, named their son X Æ A-12. But hey, if he can achieve his goal of colonizing Mars — he’s claimed that he’ll put humans on the Red Planet within the next five years — then all that bad press will go away, right?

What Happens in Space Doesn’t Stay in Space

As far as the future of the billionaire space race, it’s bound to be a contentious one. To start, the three rich dudes vying for intergalactic supremacy can’t even agree on where the border of outer space begins. And the U.S. Federal Aviation Authority recently changed its rules for who receives astronaut wings, meaning Bezos doesn’t get them since his flight was controlled solely from the ground rather than on board the rocket. Evidently, there are still some things that a $200 billion fortune can’t buy.

Branson, however, received his wings from none other than Canadian astronaut Chris Hadfield, 61, the first Canuck to command the International Space Station.

Back on Earth, opinions of the whole billionaire space race are varied. Some say that rich folk can do whatever they want with their money while others believe that they should be using their enormous wealth to help solve problems on our planet before trying to leave it.

Scientist Don Lincoln wrote in an op-ed for CNN that he believes “the commercialization of space” could offer the benefit of driving down costs for real scientific space exploration. “My interest is in launching satellites carrying telescopes that can survey the cosmos and those that can monitor the wellbeing of our planet … if those launches generate income for the companies to devise better and more economical rockets, I’m all for it.”

Meanwhile, Oregon congressman Rep. Earl Blumenauer suggested taxing those who travel to space for non-scientific reasons. “Space exploration isn’t a tax-free holiday for the wealthy. Just as normal Americans pay taxes when they buy airline tickets, billionaires who fly into space to produce nothing of scientific value should do the same, and then some.”

There’s also the environmental perspective. Bezos claimed his suborbital trip inspired him to continue combating climate change; he told NBC News that “When you look at the planet, there are no borders. It’s one planet, and we share it and it’s fragile.” As if he couldn’t have figured that out from looking at a globe.

One has to wonder, though, if Bezos caught a glimpse of his Amazon warehouses from that height. The company’s carbon footprint reportedly ballooned 19 per cent in 2020, while Fortune noted, “activities tied to its businesses emitted 60.64 million metric tons of carbon dioxide last year — the equivalent of burning through 140 million barrels of oil.” The New York Post added, “That made Amazon a bigger polluter than entire countries like Ireland, Portugal and Singapore, according to European Union data.”

True, Bezos has committed billions to fighting climate change — including his $10 billion Earth Fund — but he and Amazon still face criticism for not only their massive carbon footprint, but also for how pollution from Amazon plants affects communities of colour across the United States.

And when it comes to space tourism, experts warn that the practice could prove catastrophic for the environment.

Eloise Marais, Associate Professor in Physical Geography at University College London, wrote that burning propellants to launch space rockets “simultaneously generates greenhouse gases and air pollutants,” adding that, “in the stratosphere, nitrogen oxides and chemicals formed from the breakdown of water vapour convert ozone into oxygen and deplete the ozone layer which guards life on Earth against harmful UV radiation.” As well, she noted, “CO2 exhaust emissions and soot trap heat in the atmosphere, contributing to global warming.”

If any billionaire is allowed to extend their carbon footprint into outer space on a whim — not to mention the pollution caused by the full-blown space tourism industry they hope to pioneer — that is directly to the detriment of the Earth.

And let’s not forget the contradictory messaging it sends to those of us whose feet remain planted on terra firma.

“Are we really promoting space tourism while asking ordinary citizens to restrain their diets, travel and consumption to fight climate change?” Henry Mance writes in the Financial Times. “Will people be persuaded to cycle to work while billionaires are blasting into orbit?”

Perhaps it all comes down to this: if the people of Earth shame a billionaire, but he’s taking a joyride in space, do they make a sound?

Time will tell. Until then, ahem, watch this space.