Pearl Harbor: 80 Years Later, Remembering the Treatment of Japanese Canadians and African-Americans After the Attack 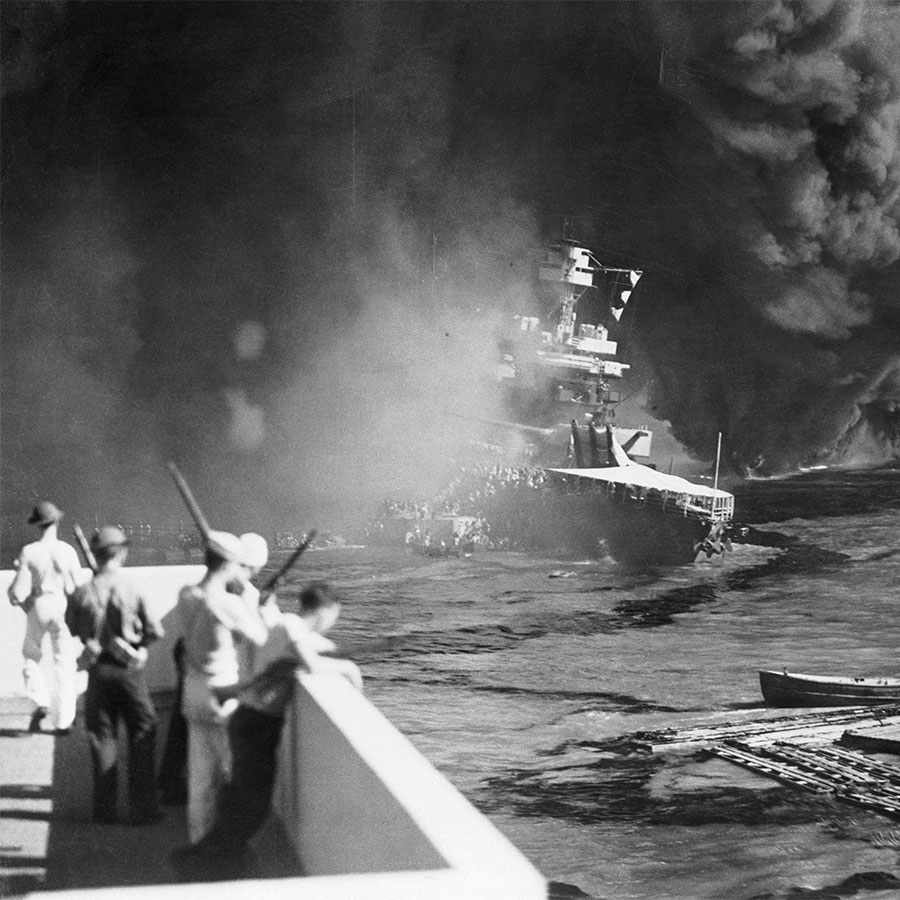 The U.S.S. California, (centre) goes down following an attack by Japanese Torpedo and Dive Bombers on Dec. 7, 1941 at Pearl Harbor. Men can be seen swarming over the side to leave the stricken warship. Photo: Bettmann/Getty Images

Although the still-raging COVID-19 pandemic forced the annual commemoration of the Dec. 7, 1941 attack on Pearl Harbour to be moved online last year, the recognition of the 80th anniversary of that fateful day will be closer to normal this December. The theme of this year’s remembrance ceremony (live-streamed at 1:40 EDT at www.pearlharborevents.com), “Valour, Sacrifice, and Peace,” salutes the 2,403 people who lost their lives during the attack and others who contributed to a victorious end to the Second World War.

Although their numbers are dwindling, about 40 Pearl Harbour survivors will be in attendance, along with some 150 veterans of the Second World War.

The remembrance event nevertheless looks to inspire the future, to educate the heirs of the struggle for freedom and to acknowledge that once-ferocious enemies can become allies.

The evening Pearl Harbour Memorial Parade will feature participants from most U.S. states, many of them young people who will be inspired by the actions and sacrifices in the name of freedom by people now thought of as the 20th century’s “greatest generation.”

Tom Berg, a  survivor of the assault on USS Tennessee, won’t be at this year’s commemoration. The Grand Marshal of the event in 2019 — the last time it was commemorated in person — Berg died unexpectedly, aged 97, in April 2020. He had spent the surprise attack in his ship’s boiler room, hearing horrifying reports of the devastation from someone on the bridge. The next morning the ship’s sick bay overflowed with injured men while the USS Arizona and USS West Virginia both smouldered. Losses aboard Berg’s ship numbered five dead and possibly 80 injured. His vivid account of his experience can be found here.

The Long Road to Reconciliation

The treacherous and frenzied attack on Pearl Harbour by Japanese forces on Dec. 7, 1941 changed everything. The following day, President Franklin D. Roosevelt described it as “a date that will live in infamy” and asked Congress to declare that “since the unprovoked and dastardly attack by Japan …  a state of war has existed between the United States and the Japanese Empire.”

It was hardly good news for Japanese Canadians, especially if they lived on or near the West Coast. Only 12 weeks after that infamous day, Canada’s prime minister, William Lyon Mackenzie King, and his cabinet passed an order-in-council under the War Measures Act that decreed, for reasons of national security, the nearly 22,000 people of Japanese ancestry (75 per cent of them Canadian citizens) living within 100 miles (160 kilometres) of the Pacific coast must be relocated. The military and the RCMP had, however, quietly advised the government that Japanese Canadians were not considered a significant risk.

In a 2012 interview, 89-year-old Frank Moritsugu of Toronto pointed out that no other ethnic groups, including German and Italian, were mass evacuated. Under the Act, homes, fishing boats and personal property of Japanese Canadians were seized and sold for a pittance. Family members were often separated and sent to work or family camps within the province or to farms in Alberta, Manitoba or Ontario.

But the real motivation for the order was racism, especially in British Columbia. Influential politicians from the province had pressed the senior government to act. Since 1895, Canadians of Chinese, East Indian and Japanese heritage had not been allowed to vote in the province — a situation that also denied them a federal vote and kept them out of certain professions.

The Moritsugu’s family home in Kitsilano was expropriated and sold; his landscaper father sent to a railroad construction camp elsewhere in B.C., close to Jasper, Alta., Moritsugu and his younger brother Ken, 18, were soon working at a highway construction camp near Revelstoke. By September, his mother and six other siblings were interned — in tarpaper shacks — at Tashme, a camp for families (where his father joined them) near Hope, B.C.

Worried about the lack of education for their younger children, the Moritsugus later asked to go to Ontario. The two elder brothers were allowed to join them since they were all leaving B.C.

But the humiliation hadn’t ended. There was the despised registration card all Japanese Canadians (16 and older) had to carry; they had to ask permission of the RCMP to travel 50 miles from home; and even Toronto had a quota on jobs for Japanese Canadians. And Moritsugu still could not vote — or join the military.

In 1945, however, the British and Australian armies needed interpreters to deal with captured Japanese soldiers. Suddenly, the Canadian Army quietly began recruiting among Japanese Canadians. Moritsugu quickly volunteered and became a sergeant with the Canadian Intelligence Corps, serving as an interpreter-translator with Special Force 136, a British counterintelligence unit. (The Japanese Canadian Cultural Centre points out the more than 100 Nisei men, children of Japanese immigrants, served postwar in the Canadian Intelligence Corps as translators with the War Crimes Investigation Force and during the American occupation of Japan.)

Incredibly, in 1946, nearly 4,000 Japanese Canadians, many of them Canadian-born, were deported to post-war Japan — the result of another order-in-council. It was repealed in 1947 but the wartime restrictions on Japanese Canadians wouldn’t be completely lifted until 1949. Then, Frank Moritsugu could finally stop carrying his hated registration card.  (He would go on to become a successful journalist with the Toronto Star and Maclean’s magazine — the first Japanese Canadian to do so.)

Japanese Canadians organized, asked for and finally received some redress on Sept. 22, 1988 — nearly a half-century after the imposition of the offending decree — when then-Prime Minister Brian Mulroney made a formal apology in Parliament for the injustice. “I never felt that I wasn’t a full Canadian citizen,” Moritsugu said, “but this was the first time I felt that other people were going to realize this.”

The federal apology included a $300 million compensation package, with $21,000 for each survivor, money for a Japanese community fund and a Canadian race relations foundation.

In 2012, the B.C. government also apologized to Japanese Canadians for the discrimination levelled at them during the Second World War because of their Japanese heritage. This seemed to come out of the blue, with no community consultation — and no promises. The National Association of Japanese Canadians pressed for meaningful recognition of the historic wrongs and a first step came in May 2021, when the provincial government granted the Nikkei Seniors Health Care and Housing Society $2 million for health-and-wellness support for Japanese Canadian internment survivors, and agreed to work with the NAJC to explore appropriate opportunities in 2022.

Japanese Americans also faced similar prejudice after the Pearl Harbour attack, fired by a panicked public. The Civil Liberties Act of 1988 apologized for the internment of American citizens and permanent resident aliens of Japanese ancestry during the war and agreed to pay compensation and to create an education fund to spread knowledge of this history with the hope of preventing such an injustice in future.

Discrimination Against African-Americans at War

Another pernicious form of discrimination was outed spectacularly during the Pearl Harbor debacle. African-Americans weren’t permitted then to fire a gun in the U.S. Navy, but could work as a steward, or a messman ­— basically a butler for an officer.

Doris Miller, 22, of Waco, Texas, proved his courage and capability on the sinking USS West Virginia at Pearl Harbor, first moving his mortally wounded captain to shelter and then firing a machine gun he wasn’t trained for at attacking planes and knocking out two. When the ammunition ran out, he worked to haul sailors from the fiery, oil-covered harbour.

The Navy mentioned but didn’t name this hero in a commendation list, but the Pittsburgh Courier, an African-American newspaper tracked him down, knowing his story would belie the perception that African-Americans couldn’t handle combat. In 1942, Admiral Chester Nimitz, commander of the U.S. Pacific Fleet, agreed and presented Miller with the Navy Cross — then its third-highest award for valour. Miller’s actions spurred the Navy to train African-Americans for more active jobs and to even commission them as officers, a significant step in the civil rights movement. By 1948, the military was ordered to desegregate.

Miller died in 1943 when his ship was torpedoed in the South Pacific — but not before he travelled the U.S., giving speeches encouraging African-Americans to enlist in the Navy.

And to honour him, a new “supercarrier” aircraft carrier will be launched in 2026 bearing his name, USS Doris Miller.

It’s the first time a carrier of this class, usually named for U.S. presidents, will be honouring a sailor, and an African-American.