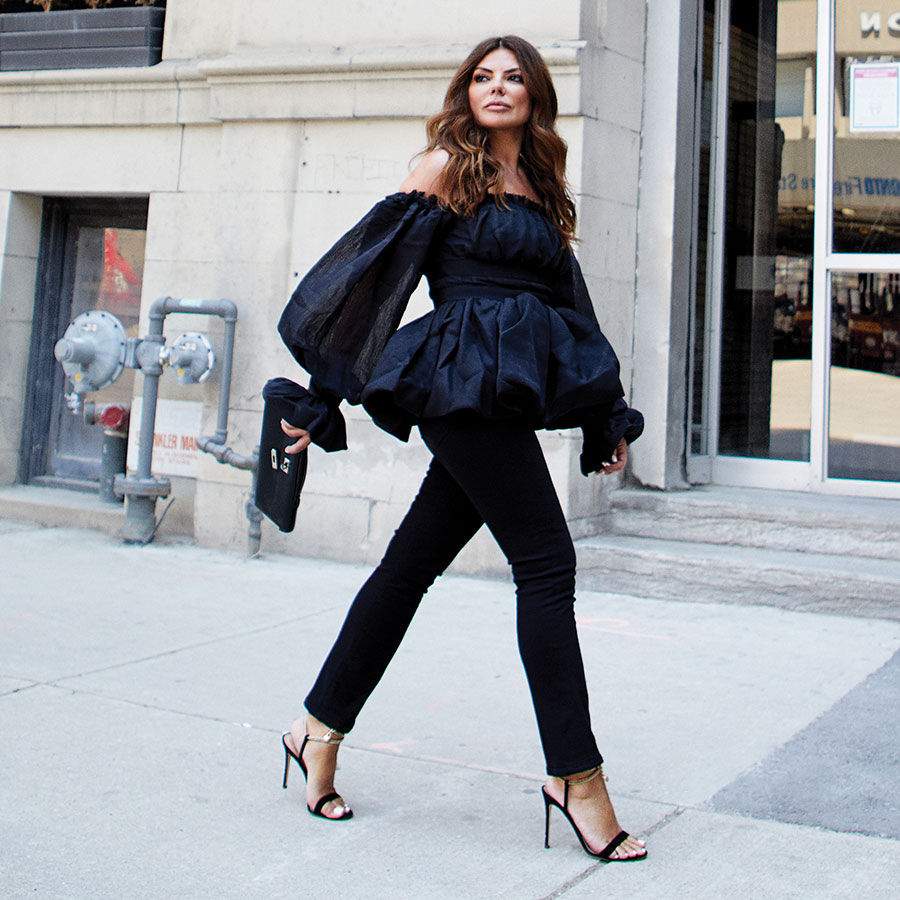 On her wedding day, Natasha Koifman got up and made a series of calls. Even on that sunny day in June, she was taking care of business. Then she went to her downtown office to get hair and makeup done for her Zoomer photo shoot. She shuffled between all-black designer outfits — The Row suit with a Rick Owens tank, then on to an Aje top and Frame denim with an Hermès bag — and walked down the street to pose in front of the five-storey Purman Building, where a condo with her name on it will rise above the historic warehouse.

“Two hours later, I got married,” she says, with the photo-shoot glam doing double duty. “That’s my life.” The wedding dress was a Zuhair Murad, also black, pulled from her closet. The strict noir dress code was adopted in her 20s; she even has an Instagram hashtag, #nkallblackeverything, chronicling her love of fashion’s dark side. She grows soft and romantic as she describes the ultra-low-key nuptials to Eric Hendrikx in her front yard under their favourite Japanese maple, with only Koifman’s son, Justin, and his girlfriend, Jessica, as witnesses.

“There is something about the age we are that is very peaceful. When you finally find the right person at the right time, it is quite comforting.” Dipping into Bette Midler territory, she says, “I have wind beneath my wings.”

Koifman turned 50 this year, and she is inspiring proof of the difference a year can make.

“The holidays of 2019, that December was one of the hardest months I had ever gone through. I was alone after a breakup, and I really dug deep to understand: What do I really want in this life?”

She joined Raya, a matchmaking app for creative professionals, and was connected the same day to Hendrikx, an American writer for Rolling Stone and Men’s Journal, who specializes in celebrity profiles, motorcycles and skateboarding.

Mark Mandelbaum, the chairman of Lanterra Developments, must have picked up on Koifman’s reinvention energy when he pulled her into his office. He had an idea bubbling away. He was looking for a persona he could channel into a 47-storey mixed-use condo project in Toronto.

“I felt Natasha had built her own personal brand, which reflected her business,” and that “we could translate that, very carefully, into a building.” He sees Koifman as a role model for the kind of person who will be drawn to the downtown lifestyle. “A lot of women I know very much admire her and find her empowering. She has worked hard for her success.”

Koifman founded her company, NKPR, in 2002. Clients include Swarovski, Flow Water (Koifman was an early investor in the alkaline water company and has handled the PR ever since), MEC, Sorel, and Sympli (a for-women, by-women fashion line that recently launched an all-black clothing capsule). She is the Canadian chair for Artists for Peace and Justice (APJ), which brings together artists, advocates and creatives to envision a radically different future for youth.

A major focus is The Academy for Peace & Justice in Port-au-Prince, founded by APJ and run in conjunction with the St. Luke Foundation For Haiti, where more than 3,700 young people between the ages of 11 and 20 attend secondary-school classes in a country where most do not go past Grade 5. “This is an opportunity to empower Haitian children to become the best they can be,” says Koifman. “Education shouldn’t be a privilege, it should be a given right.”

The Shop NK website, which sells home and fashion wares chosen by Koifman, allows customers to choose from a drop-down menu of six charities when they check out, with 10 per cent of the sale forwarded as a donation. She also offers 30-minute mentorship sessions, with an impressive group of people chosen from her Rolodex, to entrepreneurs for $250, with 100 per cent of the proceeds going to charity.

The 30-person NKPR team represents the top 10 real-estate developers in the city, so condo projects are familiar terrain for Koifman. The collaboration between Koifman and Lanterra is precedent-setting, with a building designed in her image and with her input. There have been a few instances where Toronto developers brought in big names to add cachet to properties, but none quite as bold: In 2015, Karl Lagerfeld designed the lobby of developer Peter Freed’s Art Shoppe Condos in midtown Toronto; and in June, Lifetime Development announced that Canada’s top celebrity photographer, George Pimentel, would build a gallery of his best red-carpet work for its Oscar Residences in the Annex, named after the film industry’s favourite little gold man.

Natasha The Residences will be built in the city’s Culture District, where NKPR has been part of the community for two decades, and its common spaces will feature work by Peter Tunney, one of Koifman’s favourite artists. The condo, with interior design by Koifman in collaboration with New York-based designer Alessandro Munge, is close to the Four Seasons Centre for the Performing Arts, TIFF Bell Lightbox and the Princess of Wales Theatre.

It will have a New York feel, since Koifman also has offices there. Her all-black aesthetic is informed by the Big Apple, as well as her desire to be taken seriously in the business world: A black uniform, always worn with a jacket, meant that her ideas would stand out.

“The palette will be clean, black-and-white monochromatic, because it lacks clutter,” she says. “I can’t function in clutter. That aesthetic and vibe is part of what I feel has truly contributed to the success I have had, the heartbeat of how I function.”

Koifman has had input on every aspect of Natasha The Residences. “If I’m going to put my name on it, my brand, I’m going to be 100 per cent involved.” Amenities include a content studio with lighting and soundproofing (Koifman is a frequent podcaster), a piano room, a pizza oven and a puppy spa. The project is “about how people live now,” especially in the downtown core, where the arts and entertainment crowd often work from home and use social media for business and pleasure.

Lanterra has done its due diligence, says Hendrikx, who was “excited, but not surprised” they wanted to expand his wife’s brand. “They’ve not just named a building after Natasha. They’ve taken a deep look into her career, life, fashion, style and interests, and incorporated these facets of her story into the blueprint.” The walls will be decorated with Tunney’s word art: Gratitude, The Time Is Now and Don’t Panic, “messages you see in our home and in the NKPR offices,” says Hendrikx. Even the design of the community spaces, with “moments of intimacy for small groups, is based on how we prefer to socialize with our friends and family at home.”

So how do you get to the place where someone wants to name a condo after you? Koifman, who has more than 50,000 followers on social media, doesn’t consider herself an influencer, per se. After all, she manages influencers, who are, she points out, paid to post. “I would say I’m more of a person of influence, in that I talk [online] about subjects I’m excited about, like fashion and decor. I’m excited about e-commerce.” Her agency’s motto is “Don’t just talk, say something,” which Koifman relies on to guide her when spending her influence capital. “With me,” she says, “on social media, in real life, what you see is what you get.”

In 2019, she gave a TEDx talk that showed an innate understanding of how vulnerability is essential to the perception of strength. “Authenticity” is a word that peppers Koifman’s speech, which emerges from her mouth in fully formed thoughts and sentences. She never shows up without doing her homework.

There are two prime motivators behind Koifman’s ambition, and both originate at home. The first is the example set by her parents, who emigrated from Ukraine to Edmonton and moved to Toronto when Koifman was 13. “My Dad had $100 in his pocket. They didn’t speak the language. I just remember the feeling that my parents were going to look after us. My Dad took us along looking for a job, because he didn’t know if it would be safe to leave his wife and kids in the apartment.” Her parents are still happy today, she says, and “55 years later, still in love. Their drive and strength, I thought I could do it if they could do it.”

The second was the birth of her son when she was just 18. “It could have gone very differently,” she says of her struggles as a single mother. “You do what you have to do.” Ignorance was bliss, in her case. “When you are that young, you just play the cards you are dealt. There was almost a fearlessness, because I just didn’t know what was going to happen.” Koifman maintains her son kept her centred. “Everything I have done, even to this day, the choices and decisions I make, is so he will be proud of me.” Justin, now 31, is a practising lawyer in Toronto.

Koifman, however, has never believed in work-life balance. “You are going to fail if you try to achieve something that is impossible. I try for integration of work and life instead.” Before the pandemic, she worked 15-hour days and was often on the road. After Hendrikx was stuck in Canada, when the borders closed due to COVID-19, they decided to live together at Koifman’s 1888 coach-house home in midtown Toronto.

Hendrikx is now the creative director at NKPR, bringing Koifman’s work-life integration to a new level. “Natasha and I were both young single parents,” says Hendrikx. “So, while we do come from different backgrounds, gender and geography, we had this inherent connection in our pasts – filled with pivotal life choices – that helped us relate to each other in the present.” He shares that she has a romantic side as well. “From our very first conversation, there was this mutual feeling that we were always meant to be together.”

Koifman describes herself as “an introvert with an extrovert job.” She has been happy to cocoon with Hendrikx and their two black Labs. Having manifested her best life out of a time of despair, she has her bounce fully back.

“What goes down goes up,” she says. The important thing is to learn from mistakes so you don’t repeat them. If you have a little faith, “the universe will create room for you to grow.”

A version of this article first appeared in the Aug/Sept 2021 issue with the headline “Brand Ambition,” p. 50.

Still Electric: Monika Deol On the Impact of Electric Circus and Blazing a Trail For South Asians in Canadian Entertainment

Prairie Way: Meet the Indigenous and Settler Women at the Forefront of the Great Plains Foodie Movement