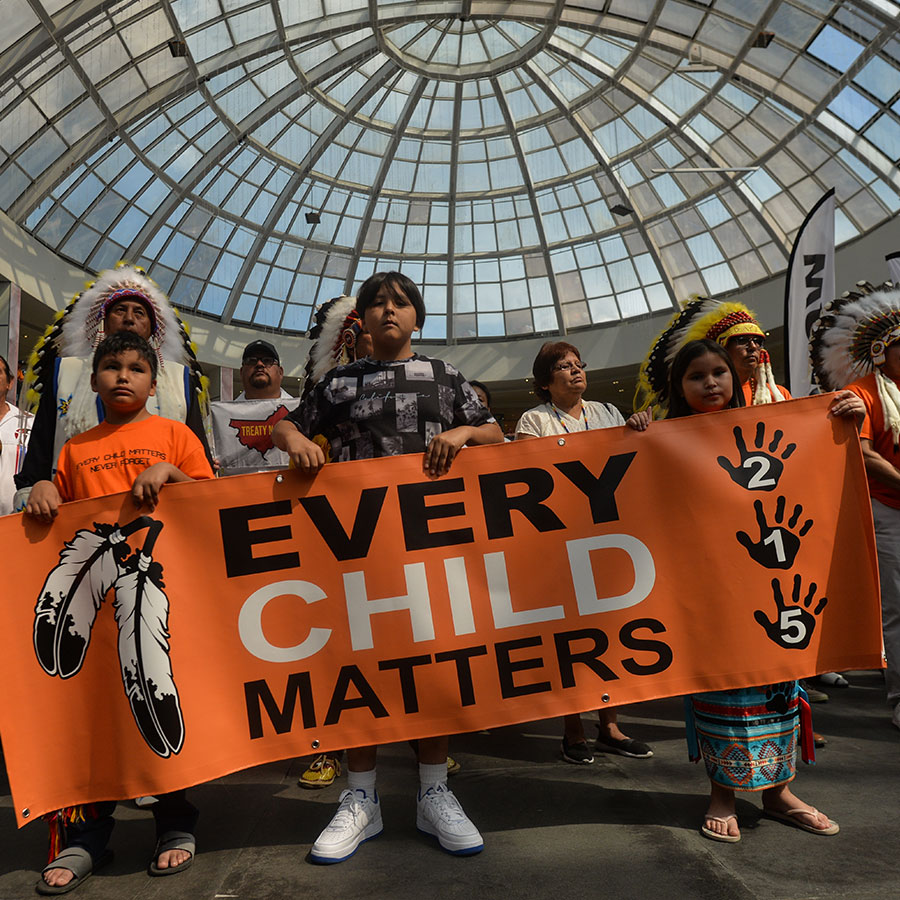 A group of Indigenous adults and children gathered ahead of the opening ceremony of the 2021 Alberta Indigenous Games (AIG) at the West Edmonton Mall's Ice Palace on August 12, 2021. Photo: Artur Widak/NurPhoto/Getty Images

Many stories related to Canada’s Indigenous communities were top of mind in 2021, from representation in entertainment to food and the environment to the tragedy of the unmarked graves found at former residential school sites.

Throughout the year Zoomer interviewed and profiled many of the Indigenous men and women at the hearts of the stories, examined the issues faced by Indigenous communities across Canada and wrote about the important lessons we can all learn from Indigenous history and culture.

What follows is a highlighted selection of those stories from the past year.

News around Indigenous communities in Canada took on grim tones at times this year, especially around the discovery of more than 1000 unmarked graves at former residential school sites around the country.

On Canada Day, Prime Minister Justin Trudeau noted that the discoveries “rightfully pressed us to reflect on our country’s historical failures, and the injustices that still exist for Indigenous peoples and many others in Canada,” while Indigenous leaders, community members and politicians reflected on celebrating our nation in the wake of the tragedies.

As well, Canadians mourned the death of Fred Sasakamoose from COVID-19. The Cree NHL legend from Debden, Sask., was a residential school survivor who became “the first treaty status First Nations athlete to ever play in the NHL” as well as a champion of Indigenous culture.

Still, good news like the appointment of Mary Simon, 74, as Canada’s first Indigenous, and oldest, Governor General — offering the nation a generational bridge toward a brighter future — and RoseAnne Archibald, 54, being elected the first ever female chief of Canada’s Assembly of First Nations, brought a sense of hope and progress.

This year, Zoomer spoke with numerous Indigenous Canadian artists, actors and filmmakers making a difference on screen and off.

That includes legendary documentarian Alanis Obomsawin, 89, who reflected on a life spent telling the stories of Canadian Indigenous communities ahead of the debut of a collection of her films on the APTN streaming service lumi.

Tantoo Cardinal, 71, received the Governor General’s Performing Arts Awards 2021 Lifetime Artistic Achievement Award (Broadcasting and Film) and also appeared on an episode of Corner Gas: Animated this year. She spoke to Zoomer about it, as well as her passion for activism and how she’s worked for years to bring truth to Indigenous stories on screen.

Then there was North of 60 actress Tina Keeper, 59, who discussed Indigenous representation and receiving the Earle Grey Award for her work in television at the 2021 Canadian Screen Awards in May, while the latest season of the docuseries Skindigenous documented the art and traditions of tattoo artistry in 13 different Canadian Indigenous communities.

Ahead of the National Day for Truth and Reconciliation (also known as Orange Shirt Day) in September, artist Andy Everson, 49 and the grandson of a residential school survivor, discussed creating his iconic “Every Child Matters” logo and the successes — and struggles — Indigenous communities face in confronting the residential school legacy through art and philanthropy. Also in September, Cree-Métis filmmaker Danis Goulet, 44, received the TIFF Emerging Talent Award at the Toronto International Film Festival and told Zoomer about the Indigenous sci-fi genre and how resistance movements inspired her first feature film, Night Raiders.

And Cree author Michelle Good, 64, spoke to Zed: The Zoomer Book Club about her award-winning debut novel Five Little Indians — one of this year’s most buzzed-about books.

Meanwhile, celebrated Cree novelist, playwright and musician Tomson Highway, 69, was a featured guest at the Devour! Food Film Fest in October. Highway recalled the Indigenous culinary culture of his youth, some of his favourite foodie locales around the world and even let us in on his own simple recipe for spaghetti alle vongole.

On Earth Day in April, Canadians had an opportunity to reflect on what we can do to ensure the protection and revitalization of our planet. And for many, the only answer lies in learning lessons from the history, cultures and traditions of our Indigenous communities.

Meanwhile, following the B.C. wildfires earlier this year, four Canadian researchers examined the importance of fire in maintaining a healthy environment, the immense benefits of Indigenous fire stewardship and how Indigenous burning practices can help curb the biodiversity crisis.

With files from Andrew Wright.