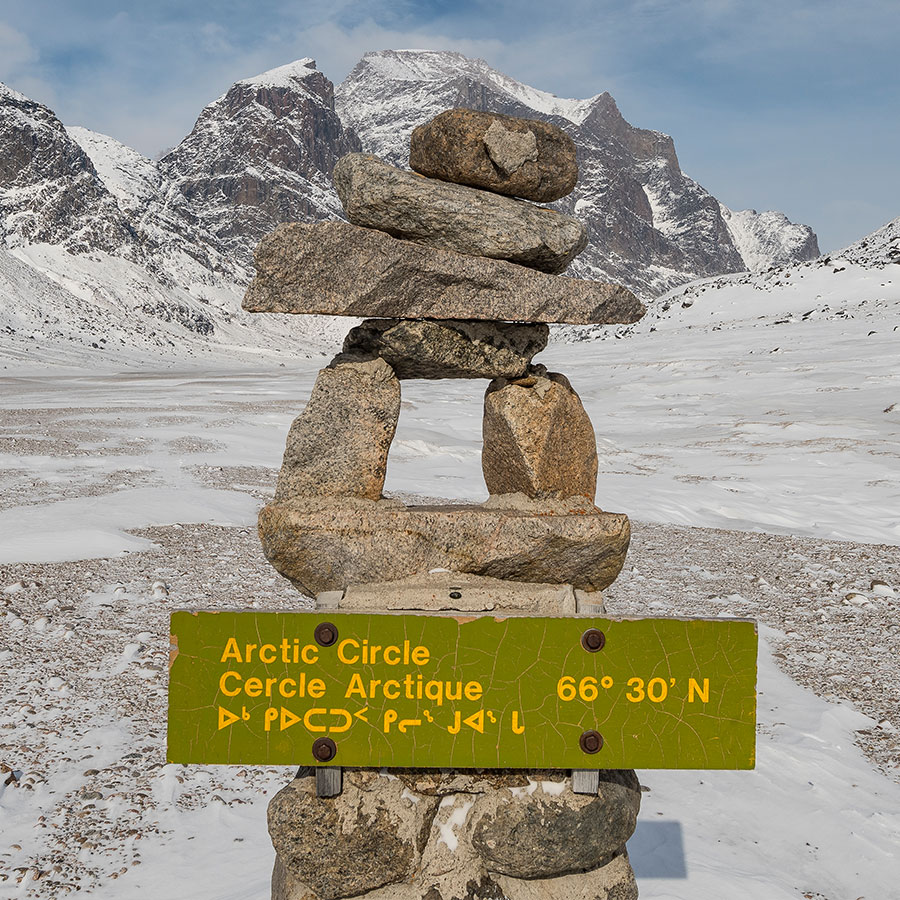 An Inukshuk with a bilingual sign marks the Arctic Circle, in Auyuittuq National Park. On March 31, Canada marks National Indigenous Languages Day, a day for both non-Indigenous and Indigenous Peoples to create space and recognize the importance of language revitalization. Photo: Christopher Morris/Corbis/Getty Images

Indigenous languages are currently in crisis and Elders and language keepers are working tirelessly to document, teach and develop resources for generations to come.

But this is difficult as there are fewer and fewer fluent language speakers in Indigenous communities. Despite being tasked with keeping languages alive, many Elders, language keepers and community members are continuing to heal from the impact of residential schools and intergenerational trauma caused by genocide, colonialism, linguistic imperialism, new diseases, forced relocation, upset of Indigenous economic, social and political systems.

Numerous studies document the negative and lasting impacts of residential schools, including loss of language and culture that led to devastating effects on mental health, substance abuse and suicide among community members.

In an effort to reverse that loss of language and culture and keep Indigenous languages alive and thriving, there’s a push to ensure they’re spoken in homes, schools, communities and workplaces. The impact of being surrounded by Indigenous languages can be life changing.

There are many approaches being used in Indigenous communities, at universities and within federal and provincial governments to ensure language reclamation. Examples include immersion to curriculum and resource development, teacher training, evaluation and research.

On March 31, Canada marks National Indigenous Languages Day, which serves as an opportunity for both non-Indigenous and Indigenous Peoples to create space and recognize the importance of language revitalization.

The United Nations recently launched a Decade of Indigenous Languages 2022-32, which details the complex nature of language revitalization and the notion that this work will take time and require collective effort, respectful relationships and authentic partnerships.

My grandparents on my mother’s side attended Spanish Indian Residential School in Ontario, so I am well aware of language loss — in my family, unfortunately, no one speaks our language. This reality is heartbreaking and I hope that my late grandmother, Mary Neyland, her siblings and her friends would be proud of this work being done today.

It is my responsibility as a mother and my motivation as a Anishinaabe woman to make change. My role is to listen to our Elders and language keepers and find strategies to support communities, with them as the lead, and in a respectful way.

At the University of Alberta, the Supporting Indigenous Language Revitalization initiative is focused on supporting community-led projects and building capacity in language. Our aim is to establish respectful relationships, share information and direct resources to Indigenous communities and organizations engaging in language revitalization activities.

A central aspect of the initiative is following the guidance of the Indigenous Advisory Council, which includes language keepers and Elders who are recognized in their communities. We recognize equity in languages and include Cree (Y Dialect and Bushland Cree), Michif, Blackfoot, Dene (Denesųłiné and Dene Tha), Inuk (Inuktitut) and Stoney languages among the council.

We recently hosted an event where Rae Anne Claxton, a PhD student from Tsawout First Nation on Vancouver Island, shared her journey to learn Hul’q’umi’num’ from her Elders.

She spoke about centring and weaving Indigenous ways of being, learning and teaching with linguistic ideology and technology. And how stories from Elders are significant in healing from the impact of intergenerational trauma and reclaiming our Indigenous identities.

Claxton highlighted the interconnectedness of language and culture, as many have highlighted before her. American linguist Joshua Fishman described it as such:

“If you take language away from a culture, you take away its greetings, its curses, its praises, its laws, its literature, its songs, its riddles, its proverbs, its cures, its wisdom, its prayers … you are losing all those things that essentially are the way of life, the way of thought, the way of valuing, and the human reality that you are talking about.”

Across Canada, progress is being made with regards to Indigenous language revitalization and maintenance efforts, in response to the Truth and Reconciliation Commission’s Calls to Action.

Many Indigenous communities are implementing important language reclamation and revitalization initiatives. The First Peoples Cultural Council is a great example of an organization that provides not only funding, but continued support to communities in British Columbia for community-led language revitalization initiatives. Or there’s the Canadian Indigenous Language and Literacy Institute, which hosts annual summer programming that teaches about the diversity and geography of languages.

This National Indigenous Languages Day, let’s celebrate the community-led initiatives that focus on building capacity and sustainability for future generations. Here are just some of the resources currently available: