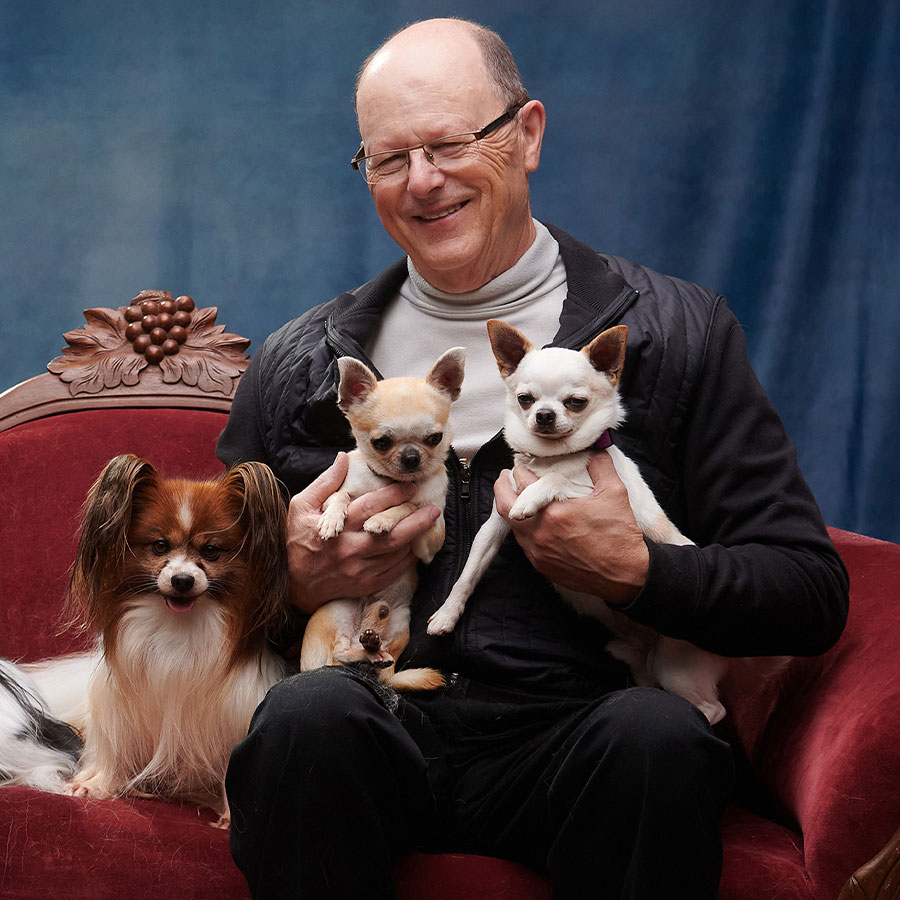 Gerry MacLellan, 75, and Cheechie, Totoo and Twerp — three of the dogs he shares with his wife Lynne, 68. Gerry, Lynne and their furry brood appear in the first episode of 'Creature Comfort.' Photo: Courtesy of VisionTV

Who do you tell your deepest secrets to?

Is it your partner, your best friend or your therapist?

“Most people said to us, without being coached, that their pets are who they tell their secrets to,” says Erin Oakes, 46, creator of the documentary mini-series, Creature Comfort now airing on VisionTV (a ZoomerMedia property). The series explores the crucial roles animals and pets play in our lives, especially as they accompany us into our later years.

The idea of sharing of secrets with pets surprised Oakes, who notes that, “They feel their pets are someone they can talk to, especially if they’re isolated, if their spouse has passed away.”

She adds, “The emotional support of pets is impossible to overstate.”

That point is evident among the stories highlighted in the series: a donkey’s friendship helps his owner cope with his wife’s illness, a renowned dog breeder contemplates breeding her final litter and a widower’s dogs help her find a sisterhood she didn’t know existed.

“All felt that their animals were bringing a much higher level of physical activity to their lives,” says Oakes. “But the biggest benefit was community building. For all the people in the series, their pets are a bridge toward other people.”

The benefits that Oakes observed and captured while making Creature Comfort are backed up by science. Beyond emotional and psychological gains, pet ownership can prove a significant boon to physical health by helping to counteract disorders like hypertension, cardiovascular disease and obesity, according to the journal Circulation.

As well, a study conducted by Washington State University scientists found that cuddling and stroking a cat or dog for just a few minutes can reduce stress by lowering cortisol levels.

“There is now a large amount of data confirming that pets are good for your psychological health and may increase, not only the quality of your life, but also your longevity,” observed University of British Columbia professor emeritus Dr. Stanley Coren, writing in Psychology Today.

Navigating Pet Ownership as We Age

Pet ownership, however, can be problematic for some older people.

While walking a dog makes exercise part of daily routine, which is beneficial in so many ways, that necessity of getting out and walking them multiple times daily can be a dog ownership dealbreaker for some people with mobility issues.

Enter charitable organizations like Elderdog, which enlists volunteers who can help with dog walking, driving to veterinary appointments or delivering dog food. If a senior with an Elderdog has to be hospitalized for surgery, the organization will arrange for temporary foster care.

Elderdog was founded in Nova Scotia in 2009 to help make it possible for older adults living independently at home to keep their dogs. The organization now has chapters (adorably called “pawds”) from coast to coast, with more than 4,000 volunteers — many of whom are also active seniors.

It’s a way not only to give back to the community but also to enjoy the companionship of dogs without the full-time responsibility.

“The best thing I ever did in my life,” declares Joyce Clark, a Brantford, Ont., resident, of volunteering with Elderdog. The 71-year-old started volunteering with the organization when she retired and is now a rehoming coordinator.

And when older people do have to give up their dogs, Ardra Cole, 68 and one of the founders of Elderdog, says, “We help find loving new homes for them. They’re usually older dogs and we place those dogs with other seniors or families.”

It was love at first sight when 16-year old Lily, a cockapoo, was brought to meet 76-year old Nancy Henderson for the first time by volunteer Joyce Clark.

Lily came to Elderdog when her owner was diagnosed with a terminal disease. “She wanted to place the dog before she passed away,” explains Clark. “Lily and Nancy were a perfect match. Nancy was a senior, lonely, living in a house by herself and Lily needed someone to love her. Now I see them walking around outside, talking to the neighbours.”

Cole, meanwhile, acknowledges that many people who have dealt with the death of a beloved pet don’t want to contemplate going through that again with an older dog.

But after some time passes, she suggests, “They’ll have shifted attitude and think, ‘Let’s move beyond that and think of what joy there might be between now and then. How can I help this dog have the best years left of life?’”

Cole believes that matching older people with older dogs is a win-win situation because, while everybody loves puppies, the energy level required, level of care, training, and exercise needs can be daunting.

For those active seniors who are willing to make a long-term commitment and to devote the time and effort to raising a puppy, the recommended smaller breeds, according to The Spruce, include Pembroke Welsh Corgi, Cavalier King Charles Spaniel, Maltese and Bichon Frise. Calm, affectionate larger dogs such as Golden Retrievers or Bernese Mountain Dogs may be a good choice, too.

Rescue dogs which have been fostered can make good companions for seniors because their personalities and quirks are already well-known to their foster parents.

But dogs aren’t the only animal companions that can bring delight to older people.

Of the more than 100 pet owners whom Oakes screened for her documentary mini-series, one was “a woman who was really convinced of the intelligence of her guinea pigs.”

“She was trying to teach her guinea pigs to chirp and sing in unison.”

Creature Comfort airs Mondays at 9:30 p.m. ET through July 25 on VisionTV, while previous episodes can be streamed at on the VisionTV website.

Treating Pets for Cancer Can Revolutionize Care for Humans

Canine Conversations: Do Our Dogs Really Understand What We’re Saying?