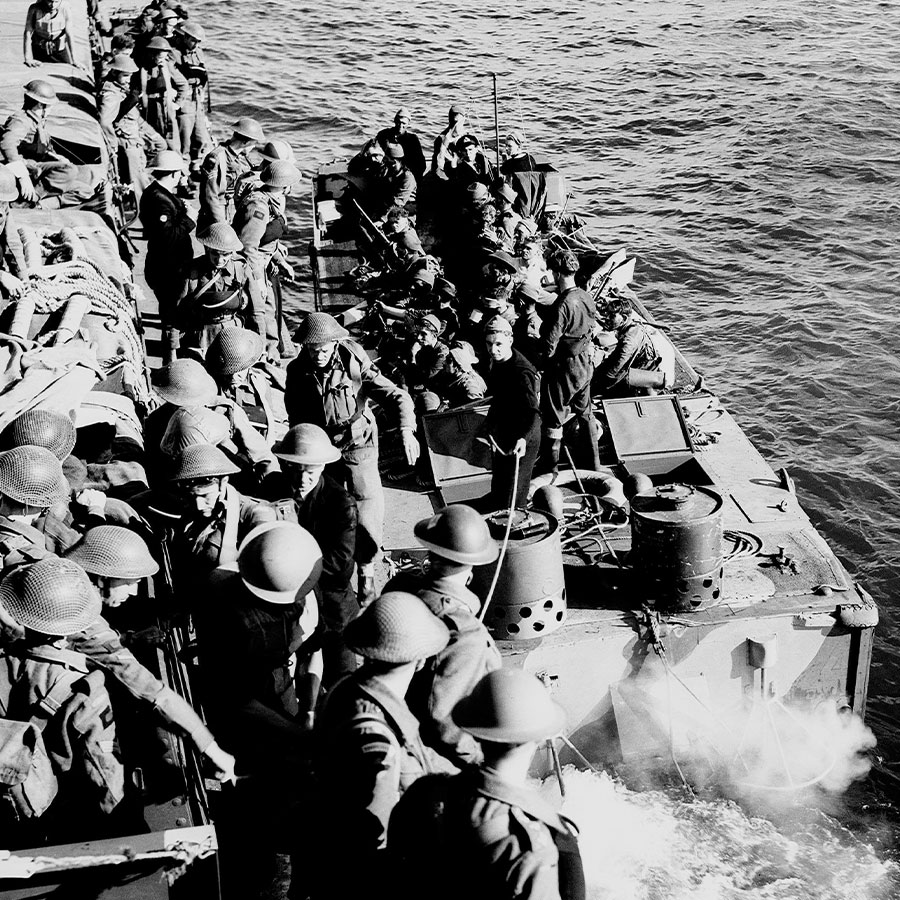 Troops of the Cameron Highlanders of Canada in a landing craft prior to the raid on Dieppe, France on Aug. 19, 1942. Today marks the 80th anniversary of the historic raid. Photo: National Archives of Canada/Canadian Press

Canadians in France and around the world today marked the 80th anniversary of the Dieppe raid — also known as Operation Jubilee.

The raid, which took place on Aug. 19, 1942, was an attempt by predominantly Canadian forces (alongside British and American allies) to, as Veterans Affairs Canada notes, “gain experience and test the equipment needed to launch an immense amphibious assault that would one day be necessary to defeat Germany.”

The attack on German forces occupying the town of Dieppe proved disastrous, as only 2,210 of the 4,963 Canadians who attempted to land that day were able to make a retreat, according to Veterans Affairs. Of those that didn’t make it out, 916 Canadians were killed and others taken prisoner. The raid, though unsuccessful, offered valuable experience and insight that helped lead to the ultimate success of the D-Day landings that followed two years later.

In a statement, Prime Minister Justin Trudeau called the Dieppe raid “one of the most difficult and tragic days of the Second World War for our country,” and recalled their “exceptional heroism, resilience, and courage.” He also noted the lessons learned from the raid that allowed future attacks on Nazi forces to succeed. “The Dieppe Raid was instrumental in leading the Allies to victory over Nazi Germany and, as a result, in changing the course of history.”

Numerous commemorative events took place to mark the 80th anniversary of the raid, including in Canada — in Windsor, Ottawa and Dieppe, N.B.

And in the town of Dieppe, France, at the Square du Canada, on a rainy Friday morning, locals took time for their annual day of commemoration and thanks for the efforts of Canadian and Allied forces to liberate their home.

The ceremony included Dieppe Mayor Nicolas Langlois, who spoke at the event, saying, “Aug. 19, 1942, remains the most deadly day in the Second World War for Canadian troops.” He added that Dieppe will “always grieve for their families and loved ones.”

As well, Langlois honoured Canadian Gordon Fennell, 100, who served with the Calgary Tanks Regiment during the raid, and who returned to Dieppe for today’s anniversary. (Fennell can be seen in his wheelchair in the top left image of the tweet below.)

“Gordon Fennell, who is representing Canadian veterans today, is renewing his solemn pledge that the 19th of August, 1942 raid will never be forgotten,” Langlois said.

The mayor also presented Fennell with a medal, noting, “You are one of the last witnesses of that page of history. It is with tremendous heartfelt emotion that I speak this morning and provide this medal to you. It represents all of those soldiers who lost their lives and it is our sign of deep gratitude for all that you did.”

You can watch the tribute to Fennell and the entire 80th anniversary ceremony at Dieppe in the video below.

D-Day: 78 Years After His Father Endured a Nazi Attack, a Canadian Man Travelled to France to Retrieve Remnants of His Harrowing Survival

Watch: Honouring the 75th Anniversary of the Dieppe Raid