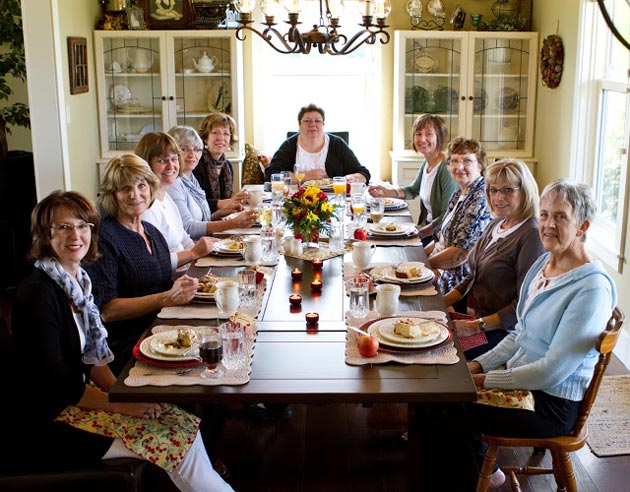 The journey of 10 Mennonite women sharing their culture, love of cooking and recipes to the world began more than four years ago. Their venture blossomed into a book that became a bestseller in Canada and allowed them to donate thousands of dollars to charity. But there wasn’t a defined destination at the start of their journey. Really, they didn’t even fathom a Canadian bestseller, a blog with, to date, more than six million visitors and numerous sponsors endorsing their cause. It began simply as an attempt to preserve Mennonite heritage and culture, a culture deeply rooted in religion and a sense of community. Spearheading the venture was Lovella Schellenberge who started to put Mennonite recipes on her blog in 2008 and after some positive reviews it dawned on her to create a blog dedicated to Mennonite recipes. She put the word out and a team of 10 was formed.

“At first, we kind of laughed because we said, ‘Oh, wow, there’s like a 100 people a day looking at our website,’ and then we were kind of excited,” she said.

“Then we realized that it’s 10 of us and it’s probably counting our own views of the website but it didn’t take long and soon there was 500 and then 1,000(views). It very quickly grew up to several thousand.”

Schellenberge and Anneliese Friesen, Betty Reimer, Bev Klassen, Charlotte Penner, Ellen Bayles, Judy Wiebe, Julie Klassen, Kathy McLellan and Marg Bartel who hail from British Columbia, Manitoba and Washington State stated their claim with their first book Mennonite Girls Can Cook. With its success, the women, all over age 50, decided to muster all their cooking skills, love for life and dig deep for a second time with their sophomore publication, Mennonite Girls Can Cook: Celebrations. Set for release in May 2013, the book, as the name suggests, acknowledges the different phases of life, from birth and childhood to marriage and milestones that should be lauded.

Each of the authors share a recipe that’s synonymous with a particular celebration and add their own thoughts on its significance. Betty Reimer’s baked chicken nugget recipe is complemented with a reflection of her own childhood. She tells of the joys of playing with her friends in a creek close to her home and the gardening chores that supplied her with pocket money. Their message of hospitality, cheer and charity is clear within the book as the women explore life’s offerings. And it is this very theme of charity that they have expanded upon. The royalties from their first publication led to a greenhouse project at the Good Shepherd Shelter orphanage in the Ukraine. Schellenburge said the greenhouse project has now inspired the community where the orphanage is located to build one as they have seen its benefits.

“There are not only enough vegetables there for the children but also for the people who work there and their families …” she says. “It’s just been really exciting to see with just this one book we’ve been able to do something.”

The ambition of the women grew. Schellenberge said they decided to do something different with the new book and extend their charity work.

“We decided to support the WASH program in Africa,” she says.

The Water, Sanitation and Hygiene (WASH) program was developed to address water sanitation problems in Kenya. It implements Solar Water Disinfection technology (SODIS), which uses plastic bottles filled with water that are placed in direct sunlight for six to eight hours where ultraviolet rays kill any pathogens in the water making it safe to drink. The program, developed in 2010, is a partnership with the Menno Kids Academy located in Mathare North, Nairobi, The Water School (TWS) and the Mennonite Central Committee (MCC).

“It’s just a very simple program but it requires money for water bottles … the amount of children, even for their families as well the benefits have been really encouraging,” Schellenberge says.

Werner Wiens, co-ordinator of Global Family, which is the MCC’s education support program, said in the first year of WASH they started out with one Global Family program (Menno Kids Academy), and now it has led them to move to and initiate the WASH program in the Muruku slums. The women have pledged to donate all their royalties from the second book to the program, but the women’s interest in charity has brought sponsors onboard who have already started donating funds to the program.

“We are deeply grateful to the women who have produced the Mennonite Girls Can Cook: Celebrations cookbook for so generously donating their royalties to this project,” Weins says.

Mennonites are known as both an ethnic or religious group having roots in Germany, Netherlands, Russia and Ukraine. During different periods of time throughout history, the Mennonite people have faced persecution that led to migration to North and South America and other parts of the world. So the recipes found in the book not only has cultural and gastronomic significance but also declares the importance of sharing family legacy and cooking to honour ancestor history as Mennonite immigrants and refugees.

NEXT: A RECIPE COURTESY OF THE MENNONITE GIRLS

1. Mix yeast, sugar, and warm water in a large mixing bowl. Let stand for 10 minutes or until the yeast has formed a foamy top.

4. Blend on high speed for 2 to 3 minutes. The mixture will be frothy and light. Do not try to save time here; it is important that the citrus is puréed with only flecks of citrus showing when finished.

5. Add the eggs, sugar, and salt to the mixture. Blend for another minute or until very smooth.

7. Add the liquid to the yeast mixture. Add the flour 1 cup (250 ml) at a time. Do not add more than 8 cups of flour. It will be soft but the longer you knead it, the more manageable it becomes. Knead for 8 to 10 minutes either by hand or by machine with a dough hook until it forms a ball and the sides come clean in the bowl.

8. Transfer dough to a large bowl and cover with plastic wrap and a tea towel. Let rise until doubled, 1 to 1-1/2 hours. Punch down and let rest at least 10 minutes or up to 1 hour.

Make round, rectangle or braided loaves and let rise until doubled in bulk, 1 to 1-1/2 hours.

10. Preheat oven to 350 F (175 C). Bake the loaves until golden brown. Check loaves after about 25 minutes. Each sized pan will take a different length of time to bake.

1. Beat all ingredients together until light and smooth.

2. Spread on each slice of Paska. Sprinkle with colored sugar.

TIP
• Store loaves in the freezer unless you are eating them the same day.

“While this recipe was in our first cookbook, Mennonite Girls Can Cook, this continues to be our most requested recipe, and it’s the recipe that brought us all together. This recipe for Paska is light, soft and moist, with the addition of a whole lemon and orange. Bake it in loaf pans or fill muffin tins, make into buns or form into a braid, ice and sprinkle to decorate . . . and be prepared to do it all over again before Easter is over! My beloved’s Grandma Fast gave me this recipe, using these ingredients, and I modernized it using a blender and kitchen machine with a dough hook.” —Lovella Schellenberge

Recipe is excerpted with permission from Mennonite Girls Can Cook, Celebrations.