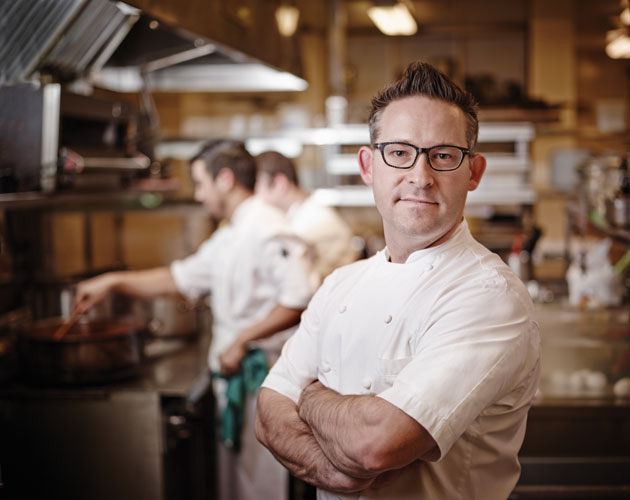 Chef Jason Bangerter is excited to hone his gardening skills. As the newly appointed executive chef of Langdon Hall Country House and Spa in Cambridge, Ont., Bangerter has a lot on his plate as he revamps menus and renovates the kitchen. But a most pressing duty is to decide what to plant in the vegetable and herb gardens, a centrepiece of Langdon since it was built in 1902. Fortunately, two staff gardeners have observed the seasons come and go and know how to nurture the pristine produce that keeps diners coming back. Still, Bangerter will need to roll the dice, pick his seeds and hope Mother Nature plays ball.

Though Bangerter is new to Langdon Hall, he’s not new to country life, hailing from Milton, Ont., just 35 minutes down the 401 from Langdon. He’s schooled in the techniques of cuisine naturelle – emphasizing lighter preparations and purity of ingredients – studying with Michelin-starred Swiss legend Anton Mosimann. He then rose up the ranks of Toronto’s Oliver & Bonacini group, running the kitchen at flagship Auberge du Pommier before launching the TIFF Bell Lightbox’s Luma and O&B Canteen.

On arrival at Langdon Hall in October, Bangerter was immediately struck by the gardens, a centrepiece of the 75-acre grounds. Then, local farmers and foragers came knocking. “One brought me a 200-pound Berkshire pig,” he said happily. “And another came in with foraged mushrooms, chanterelles and other goodies. These aren’t people just trying to sell me stuff – these are the people who make it or source it.” Bangerter is matching this hyper-local bounty with sustainable ingredients such as B.C. scallops and his new favourite, giant squid. Served two ways – sous vide and crispy fried – with sea buckthorn and a vinaigrette of ink and Niagara vinegar, the squid is a dish of contrasting textures and delicate flavours. But it’s a wisp of crispy caribou moss, lightly deep fried to a savoury crunch, that holds it together. Chef has more such curve balls up his sleeve. Witness a squash soup with Quebec foie gras, winter-spiced brioche and chestnuts. Or a dish of seared B.C. scallop and braised beef short rib with Ontario heart nuts. His garnishes are character actors, playing subtle yet vital roles. This may well be his signature for Langdon, a “nouvelle” cuisine naturelle where intensely local ingredients are expressed on a global canvas. But for simplicity’s sake, we’ll just call it delicious.

This spring, 40 maple trees on the property are tapped and the sap boiled into syrup fresh each day. Here, a recipe from Jason Bangerter, executive chef at Langdon Hall Country House and Spa.

ACORN SQUASH SOUP On chilly nights, I like to serve this soup with a garnish of braised meats (duck, rabbit or pork confit) with seared nuggets of foie gras, stewed chestnuts and brioche seasoned with winter spice. At home, I simply add a dollop of vanilla yogurt, pomegranate seeds and rustic baked black pepper croutons.

2  acorn squash
50 ml     maple syrup
Olive oil
Salt and  pepper
1   onion
1   carrot
6  cloves garlic
Half rib celery
60 g unsalted butter
5 ml minced fresh ginger
250 ml    dry white  wine
3 L     chicken or  vegetable stock
2     bay leaves
Half stick cinnamon
6     sprigs each thyme and parsley
2     sprigs  rosemary
Split squash and remove seeds. Drizzle with half the maple syrup, a splash of olive oil and season with salt and pepper. Place cut side down in a roasting pan in a 350 F oven for 30 minutes or until lightly caramelized and fork tender. When cool enough to handle, scoop out the cooked flesh and reserve.
Slice onion, carrot, garlic and celery. In a medium stockpot, sweat the vegetables in butter and ginger until soft. Add cooked squash and wine and cook until wine is reduced by two-thirds. Add stock to an inch above the vegetables. Add cinnamon stick. Bring to a boil and reduce heat to a simmer. Tie herbs in a tight bundle with string; add to the pot and cook for 20 minutes.
Remove herb bundle and cinnamon. Purée soup in batches in food processor until smooth and velvety, adding remaining syrup and more stock if necessary. Strain and season with salt and pepper to taste.
Serves 12.