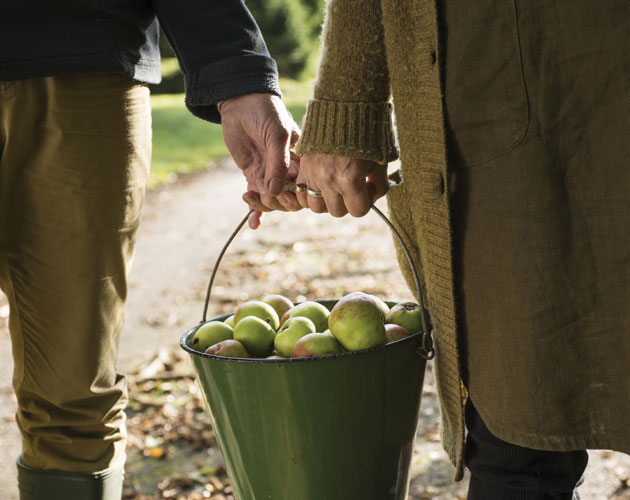 I’ve always loved this time of year. As a kid, it seemed to me like, suddenly, apples were everywhere. Tucked in lunch boxes and homemade pies, spilling out of bushel baskets at Demarco’s fruit stand and, at home, heaped in the fruit bowl adorning our Formica countertop. I can’t remember whether my mother polished the apples beforehand, but it’s likely – Mom polished everything.

Like many families, mine ate mostly McIntoshes. Tom Chudleigh, who owns and operates Chudleigh’s pick-your-own apple farm near Milton, Ont., says that while “Mac” are still favoured by the children who visit, adults rave about all the new experiences their tastebuds encounter as they sample their way through many of the 22 varieties he grows. “People don’t realize the staggering amount of varieties that exist these days,” he says.

Apple sex is behind most of the diversity. Like humans, an apple seed is not a clone of its parents. When pollen (male) mates with a blossom (female), the resulting child, if you will, may share some characteristics of its mom and dad, but it doesn’t inherit DNA and, as such, is significantly different. The origins of many varieties such as Granny Smith are unknown – they were merely chance seedlings created by the randomness of Mother Nature. Additionally, a Mac or any other variety can’t reproduce with its same species and must be cross-pollinated, which creates new species. In the early 1800s, then, when a young farmer named John McIntosh came upon a sapling in Ontario, the delicious fruit it bore couldn’t be replicated by simply planting the seeds. So how, more than 200 years later, did Mom get Macs in her fruit bowl? Budding. Breeders take a small branch of a desired tree and graft it to the rootstock of a different variety. Any Mac you eat today comes from farmer John’s original sapling. (Talk about knowing the provenance of your food!)

Many types of apples are the result of human intervention. On farms and in research labs, breeders cover the blossoms of a desirable tree to prevent random pollination and then manually apply pollen from a tree of a different variety with favourable characteristics. The quest for the next best thing has produced some wonderful cultivars such as the juicy sweet Sunrise, a cross between a McIntosh and a Golden Delicious, and the Jonagold, a cross between a Golden Delicious and a Jonathan that tastes of honey.

Harry Burton, who owns Apple Luscious Organic Orchards on Salt Spring Island in British Columbia, says red-fleshed varieties are the apples of the future. He grows more than 200 different types of apples, 30 of which are red-fleshed. “When people bite into one for the first time they gasp because it tastes so good. Chefs in Vancouver and Victoria have standing orders for them with me.”

Other favourites? That, Harry says, depends on what you’re after. “To me, there are two types of apples: city apples and country apples. City apples appeal to city people, which means they look good, they’re big, red and shiny. Country people, on the other hand, don’t care much about looks. They’ll go for one of my Cox Orange Pippins because it tastes great – never mind that it’s ugly.”

Of course, lots of people can’t help but taste with their eyes, so it’s a good thing seeing is only one of the senses relied upon at apple tastings. Connoisseurs also note aroma (earthy, floral, grassy), mouth-feel (coarse, finely textured, chewy) and taste (sweet, tart, herbal, spicy). Many varieties have the complexities of wine, experts claim, which makes apples the perfect star of an autumn tasting party. According to chef Michael Olson, a professor at Niagara College, the best place to get them is at an orchard. “Every time I pick an apple and take that first bite, it blows my mind,” he gushes. “If you’re having an apple tasting party and you can get to an orchard a day or two beforehand, do it.”

Canada’s first orchards can be traced back to the 1600s when European settlers arrived on our shores carrying seeds and saplings in their sacks. Today, we have about 1,600 commercial apple farms, all of which will be in high gear generally from mid-August until late-October. Ask   the farmer to help you choose a good mix of tastes and textures – variation is the spice of life at tasting parties.

Mind you, spirits help. Set up an apple-pie martini station (recipe below) or line a wooden bushel with a clear garbage bag, fill it with ice and different brands of hard Canadian cider. Food-wise, go simple. For example, after the official tasting part of your bash is finished and everyone has evaluated each apple on its own, invite guests to pair remaining apple slices with other delights. “A platter of smoked salmon, cheddar, ham, slices of dark rye bread with almond or peanut butter, and a bowl of maple syrup for dipping, would be excellent, and it’s easy,” says Olson.

Given the abundance of varieties, it’s strange that many of us have only tried a handful. But no more. If you’ve always been a Mac guy, a Gala gal or a friend of Fuji, now is the time to play the field.