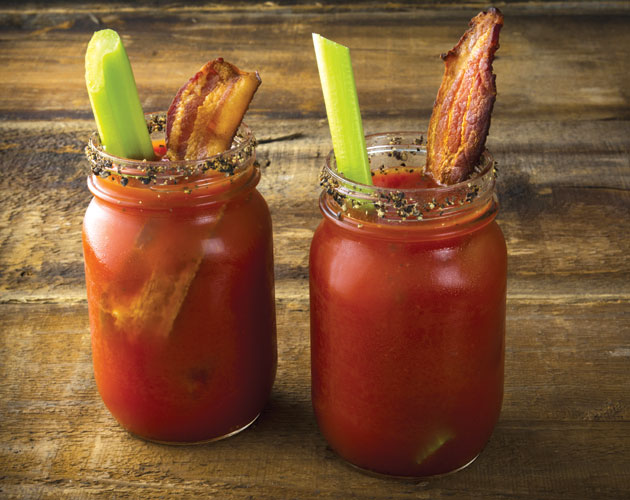 As Canada’s unique drink – the Caesar is virtually unknown outside this country – turns 45 this year, we welcome Canada’s very own signature cocktail into Zoomerdom

When Toronto’s landmark Eaton Chelsea Hotel on Gerrard reopened on Canada Day last year, the renovations by the luxury Langham Hospitality Group were much-anticipated. With 1,590 rooms, the largest hotel in Canada was due for a reinvention and no one was concerned that the esthetics wouldn’t measure up. After all, Langham is well known for its luxury since it opened its first hotel in Victorian London in 1865. One of the Eaton brand signatures is the T|Bar. The one at the Eaton Chelsea features Canada’s No. 1 mixed drink: the Caesar.

Served in Mason jars on tall stems at the Chelsea, our country’s official cocktail – it was recognized as such by Parliament in 2009 – was invented in Calgary in 1969 by bartender Walter Chell to celebrate the opening of an Italian restaurant and was based on the rich flavours of Spaghetti Vongole  – spaghetti with clams. (That same year, the Mott Company made Chell’s life – and all bartenders – easier with the introduction of Mott’s Clamato, which sells enough each year in Canada to make more than 350 million Caesars.)

While the basic preparation follows a one-two-three-four rule – one ounce of vodka, two dashes of hot sauce, three pinches of salt and pepper, four dashes of Worcestershire sauce topped with four to six ounces of Clamato served in an iced-filled celery salt-rimmed glass – variations are endless.

James Cushinan, Eaton Chelsea bars and lounges manager, looked forward to launching the hotel’s own spin on Canada’s drink, as executive chef Brian MacAskill creates homemade Clamato juice for the five Caesars the bar offers: The Classic, The Checkout, The Whasssaabi, The T|Garden and The Latin Dancer. Some of the garnishes look like a meal on their own. While you may not be making your own Clamato juice, here is the Eaton Chelsea’s The Classic. Rumour has it the hotel may be marketing the signature homemade Clamato sometime soon.

Rim top of glass with lime wedge and dip into celery salt (for best results, do not spin; move glass forward and back and side to side). Fill glass ¾ with ice. Add Tabasco and Worcestershire, then vodka. Fill with Clamato and garnish with celery and lime.

Hail More Caesar
Don’t limit yourself to vodka or celery salt and lime. Experiment with gin, rum, whisky, tequila and with different rimmers – celery salt enhanced with herbs and spices, cracked sea salt and pepper, even Montreal steak spice. Top it with apples to zucchini, sprigs of dill or rosemary, even lobster, shrimp or oysters to augment the seafood flavour, according to Caesars: The Essential Guide to Your Favourite Cocktail (Appetite by Random House, 2014). From that edible cookbook comes the Cucumber-Infused Caesar.

Caesar remains popular as a “hangover cure,” although its effectiveness remains questionable (but a University of Toronto study did show that drinking a Caesar when taking Aspirin may protect your stomach). As Canada’s unique drink – it’s virtually unknown outside this country – turns 45 this year, we welcome Canada’s very own signature cocktail into Zoomerdom.