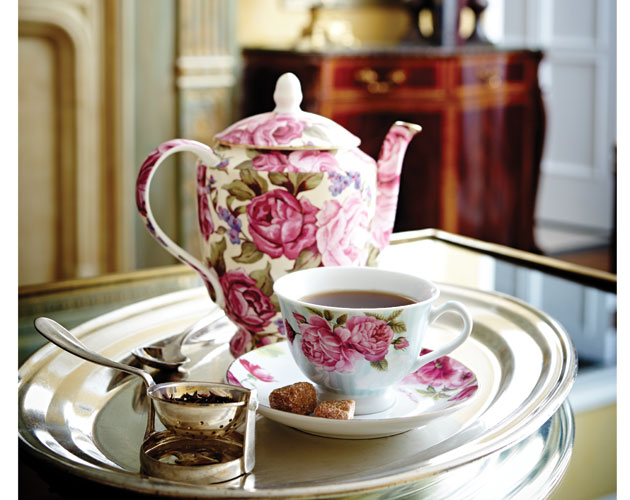 The above passage from Henry James’ novel The Portrait of a Lady, was first published in 1881. According to the teetotalling purveyors at Twinings of London, it had been more than 200 years earlier when Catherine of Braganza, the Portuguese-born wife of King Charles II, brought this oh-so-civilized way to wile away the afternoon to the royal court. Nearly two centuries later, Anne Russell, Duchess of Bedford, had turned it into a social affair, inviting her lady friends to take refreshment to abate the hunger pangs between lunch and the traditional dinner seating of 8 p.m. Of course, it didn’t hurt that the Duchess of Bedford was an intimate of Queen Victoria, and soon after, the custom became fashion.

In our own harried world, we often look back to what might be considered a more genteel time. Over the past few years, we’ve muddled over martinis in the smoky boardrooms, bars – and bedrooms – of Mad Men and its mid-century modernity, but our current love affair with the mannered, more halcyon Downton Abbey lifestyle seems to jibe better with our own era: just off the cusp of a world in financial turmoil and continuing cultural conflict, we insist on a stiff upper lip and, while looking forward to a rosy future, traditions such as afternoon tea help ground and comfort us. Where once holiday brunch was the go-to way to please a crowd, now we might choose to take a different kind of pause, build a rapport, find community and linger over a cuppa.

Afternoon tea is not to be confused with high tea say the tea experts at Twinings. Traditionally, high tea is served at the formal dining table later on in the day,  around 5-7 p.m.

With that in mind, afternoon tea is the perfect option for entertaining a group, friends and family of all ages – after all, who doesn’t like strawberry jam and scones or sandwiches with the crusts cut off? It’s a casual enough affair; no need to set places at the dining room table, just provide lots of low seating, such as couches and stools round a coffee table or grouped side tables, and you’re good to go. Finger sandwiches mingle with smart tarts and, to celebrate the end of one year and the beginning of the next, we add a most modern take: tea cocktails. Here, they’re graciously served up by Canada’s Fairmont Hotels & Resorts – where afternoon tea service happens to be a mainstay at properties across Canada, no matter the time of year. Try the recipes below for a twist on tradition and an adult flair that caps off a crisp winter’s afternoon in, well, yes, a most civilized way. Both Don Draper and Lady Mary would approve.  —Vivian Vassos

Orange slice
Shake and serve in whisky glass with a slice of orange.

Shake and serve up martini-style.