Your Questions About Chanukah Answered Here 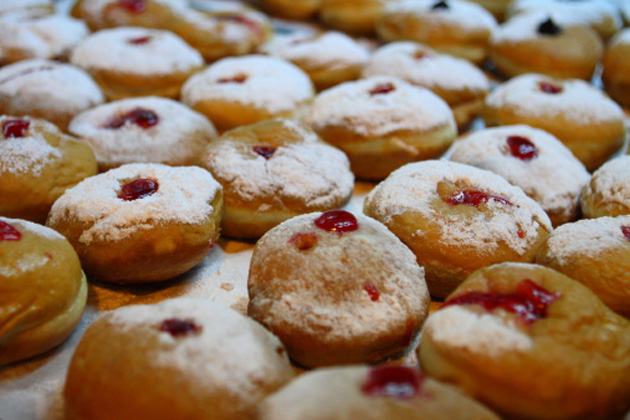 So many questions about Chanukah, beginning Sunday evening December 24 and ending on January 1, 2017.

First, the question that’s on everyone’s mind as the holiday approaches:

A. They can be if you use gluten-free flour. These are potato pancakes, after all, and potatoes are gluten-free.

Q. What about other traditional Chanukah foods, such as the jelly donuts called sufganiyot (pictured above)? Are they gluten-free?

Q. Is it required to eat these traditional foods on Chanukah?

A. Absolutely. Although it is not a commandment, it is nevertheless in the spirit of traditional observance to consume obscene amounts of starchy carbs deep fried in oil and topped with sugar or sour cream. To refuse to indulge would indeed be a sin.

A. Because this “fressing” (a Yiddish term defined as “the act of eating without restraint, especially often or in large quantities; devouring”) occurs in a religious context, one is absolved of all guilt.

Q. What is the reason for Chanukah?

A. Contrary to what many people assume, it is not because most Jewish children don’t have Christmas, although it is especially helpful in this regard.

Chanukah celebrates the victory, more than 2000 years ago, of the Maccabees over a much larger Syrian Greek army that sacked Jerusalem and forced Jews to abandon their religion.

Q. Why is Chanukah observed by lighting candles for eight days?

A. After the temple desecrated by the Greeks was restored, there was only enough ritual oil found to last one day.

But the oil miraculously burned for eight days, lasting until more oil could be found and sanctified.

Also, if we deep fry food for eight days, we will probably run out of canola oil, thus recalling the miracle of Chanukah.

Q. Why do some Jewish families give their kids gifts every night when they light the candles?

A. One theory is that the custom began in 18th-century Eastern Europe with Jewish parents giving coins (Chanukah gelt) to small children to give to their teachers as a token of appreciation, like tipping the concierge at Christmas. Somehow, this custom led directly to parents giving children iPad Minis (so they can use the Spin The Dreidl app, of course), Lego, Disney characters and iTune gift cards every night of the holiday.

A. These coins represent the coins issued by the Maccabees upon liberating their nation. Traditional chocolate coins made by the Israeli firm Elite typically bear the image of the same menorah that appeared on the original Maccabean coins. However, loonies and toonies sold at Bulk Barn are also acceptable and gourmet milk chocolate Chanukah gelt in gold pouches is available at Godiva. It is also possible to find organic, dark chocolate Chanukah gelt. But research has not yet revealed a source for artisanal gastronomically correct full-bodied complex Chanuka gelt chocolate from Ecuador.

Q. I’m not Jewish but I have Jewish friends and colleagues. Is it appropriate to wish them Happy Chanukah? What about wishing them a Merry Christmas?

A. Good wishes are appropriate and welcome at all times. Even though most Jews do not celebrate Christmas personally or in their homes, they enjoy the holidays as a festive occasion and enjoy participating in the seasonal events, parties and online sales. Many Jews observe Christmas Day in a secular way, going skating or skiing, dining out on Chinese food, and seeing otherwise sold-out movies in half-empty theatres.