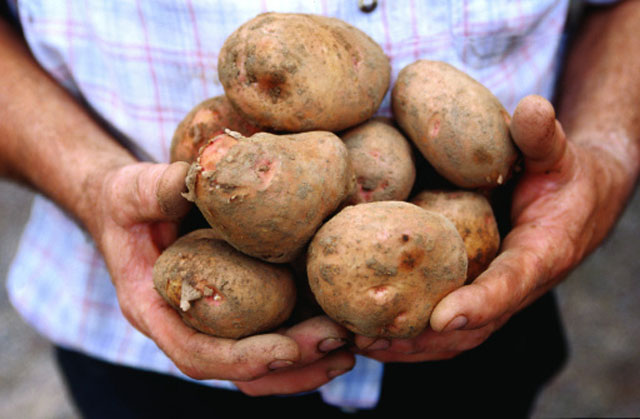 A look at traditional Irish food: the good, the bad and the ugly. (And some classic recipes too!)

Ask about Irish food and you’ll probably first think of the potato. While this certainly is a feature of the Irish diet, prior to its introduction to the fair isle in the 16th century, oats formed the basis of Irish peasant fare. Here’s the nutritional lowdown on these staples and some ways to enjoy them.

The good: potatoes have gotten a bad nutritional rap lately — not surprising, since we tend to load them up with fats by frying them or adding butter and sour cream. But the potato itself is a source of carbohydrates, minerals such as potassium and iron, and vitamin C (when potatoes are new; after 9 months of storage the amount of vitamin C is reduced). The trick is to prepare the potato without a lot of added fats and salt — and to keep the skins on. So break out the scrubber and go ahead and indulge.

And although the traditional colcannon is not precisely the healthiest way to eat potatoes — it contains fat in the form of butter and the potatoes are peeled — it adds nutritional punch by including kale, a leafy green which contains high levels of antioxidants and is rich in beta-carotene, iron and potassium (cabbage may be substituted instead). Here’s a recipe to enjoy:

Peel potatoes and cut into 1-inch pieces; place in saucepan. Cover with salted water and simmer until tender (15 minutes). Mash with milk and butter. While the potatoes are simmering, steam kale for 10 minutes, or until it is tender, and sauté onion in olive oil. Once potatoes are mashed, stir in kale and onion; season to taste. For an extra-decadent treat, fry up leftover colcannon the next day in two tablespoons olive oil.

The bad: A traditional recipe for potatoes in Ireland is boxty. While boxty does not qualify as the healthiest way to eat potatoes, it is certainly one of the yummiest, and has even inspired the verse:

Boxty on the griddle,
boxty in the pan,
if you can’t make boxty,
you’ll never get a man.

Grate raw potato and mix with the cooked mashed potato. Add salt, pepper and flour. Beat egg and add to mixture with milk to produce batter that drops from a spoon. Drop by tablespoonfuls onto a hot griddle or frying pan. Cook over a moderate heat for 3-4 minutes on each side.

The ugly: boxty is often served as part of an Ulster Fry, with fried bacon, fried sausage, fried eggs, fried black pudding and fried soda bread. This is not recommended for anyone concerned with heart health, except perhaps once in a great while.

The good: oatmeal is a healthy complex carbohydrate. Studies have shown that oatmeal can help stabilize blood glucose in diabetes and also help with those suffering from hypothyroidism; oatmeal may also help to lower cholesterol. Whole grain oats contain seven B vitamins, vitamin E, and nine minerals, including iron and calcium. And everyone can benefit from its high fiber content. Cooking oatmeal the traditional way — even quick oats, as opposed to instant — is inexpensive and a healthy way to consume oats without added sugars. Here’s a slow cooker version that’s easy to make in large quantities for a family gathering, and which uses the traditional steel cut:

Spray the inside of a 3-4 quart slow cooker with nonstick cooking spray. Combine all ingredients in the slow cooker and mix well. Cover and turn on low setting. Cook overnight or 8-9 hours. Stir well before serving.

The bad: oatmeal has become available in highly processed forms, which include loads of added sugar — particularly the instant packets. Make plain oatmeal and add your own fruit and even honey or maple syrup to control the amount of sugar consumed.

The ugly: watch the oatmeal cookies — many versions are not only full of sugar, but laden with trans fats.

Is Guinness good for you?

And of course the final piece in the Irish diet — a good pint of Guinness. Although the company makes no claims (despite its previous infamous slogan “Guinness is good for you”) that it is, a Wisconsin research team reported in 2003 that a pint of Guinness a day might actually provide some of the same anti-clotting effects that acetylsalicylic acid does. The team tested its effects on dogs who had narrowed arteries similar to those in people affected by heart disease. They believed that antioxidant compounds in the Guinness, similar to those found in certain fruits and vegetables, may be responsible for the health benefits because they slow down the deposit of harmful cholesterol on the artery walls.

Although this study has not been replicated, it may be enough of a reason to enjoy a glass of Guinness this St. Patrick’s Day!

For St. Patrick’s Day and Beyond: A Taste of Dublin