Celebrate the Season With a Healthier Holiday Feast 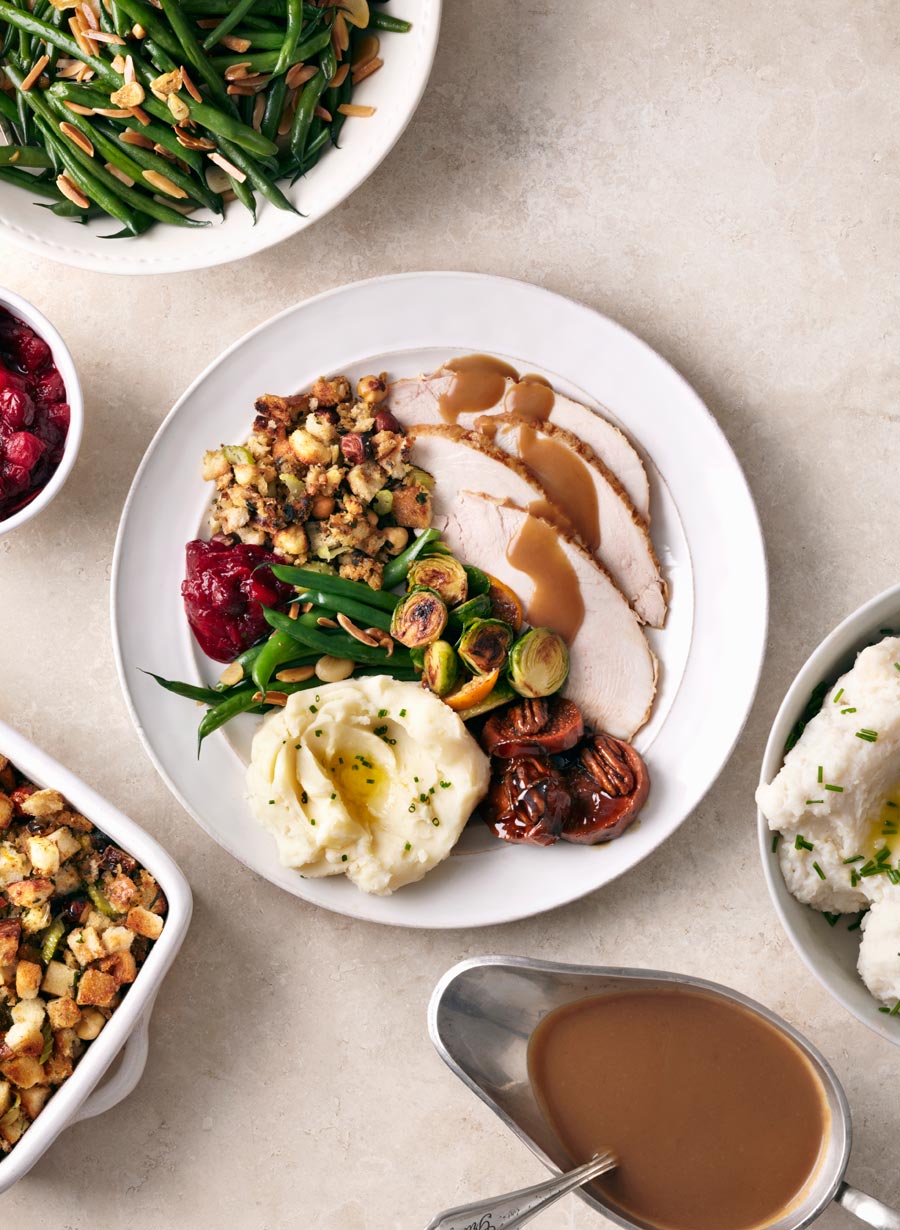 Healthier holiday fare doesn’t have to mean sacrificing tradition or taste. We’ve got some delicious ideas to bring balance back to your celebration.

In theory, the typical holiday feast shouldn’t be a dietary disaster. After all, turkey is a lean source of protein, we’re offered a variety of vegetables and grains and a glass of wine even has some health benefits.

Besides the fact that portion control goes out the window (seconds and thirds, anyone?), the extras can do us in. We smother everything in gravy, butter and creamy sauces, load up our plates with refined grains and shake on the salt. Dinner isn’t the only culprit — appetizers, drinks and dessert can have as much fat and as many calories as the meal itself.

No need, however, to sacrifice taste or cut out your favourite fare. Here, some tasty ways to bring more balance to the table.

Indulging in a few appetizers can heap on 200-300 calories if you’re reaching for pastries, meatballs, party mixes or creamy dips and spreads. Instead, try salsa, legume-based spreads (like hummus or black bean dip) or bruschetta instead of cream-based dips and pâté. Use whole grain crackers or vegetables to do the dipping, like hunks of bell pepper or endive leaves. Serve plain shrimp with a tomato-based cocktail sauce instead of meatballs, and use toothpicks to make skewers of fruit to dip in low-fat yoghurt. Cucumber cups, cherry tomatoes and mushroom caps can make a healthy base for layered or stuffed appetizers too.

Luckily, most cooking methods don’t add a lot of fat or calories to the main attraction. However, like chicken, turkey is at its leanest when cooked without the skin, as that’s where you’ll find most of the fat. If sacrificing that golden, crispy exterior doesn’t appeal, try this tip from the UK National Health Service (NHS): prick the skin to allow the fat to drain off during cooking, and set your bird on a trivet or rack so it isn’t sitting in the fat.

Another way to cut the fat: steer clear of butter-basted turkeys.

What about gravy? Experts say you can make it a little healthier by letting the juices sit in a jug for a few minutes and skimming the fat that rises to the surface. (If you have time, refrigerating it works better as the cold will harden the fat.) Alternatively, serve the turkey with a fruit puree or cranberry sauce instead.

Of course, what’s in the turkey matters too. Experts recommend cutting the sausage or bacon from the stuffing and opting for recipes that include vegetables, chestnuts or fruit for extra flavour. Try using whole grain, whole wheat or artisan breads instead of white, or look for recipes that use other grains like rice, bulgur wheat or barley.

Better yet, skip the stuffing and fill the turkey cavity with fruits and vegetables — like quartered apples and onions. (You can even serve them as a side dish too.)

Unfortunately, stuffing is often the culprit in food poisoning because it’s slow to cook and slow to cool, plus the moisture is perfect for growing bacteria. Health Canada recommends preparing stuffing on the stove top or baking it in a separate dish to dodge this threat. If you prefer it cooked in the bird, make sure to not over-stuff and handle with care.

Better on the side

You’ve probably noticed holiday feasts tend to be heavy on the starch — with dinner rolls, stuffing and potatoes — and light on the vegetables. To help restore balance, try skipping some of that starch. For example, replace all or part of the mashed potatoes with mashed sweet potatoes or mashed cauliflower — and save the rolls for tomorrow’s turkey sandwiches.

If you have to have rolls, go for whole grain and keep the portion sizes small. Can’t part with potatoes? Try herb-roasted mini potatoes that don’t rely on butter or cream for flavour, or bake them to skip the fat altogether. If mashed potatoes are must-have, use ingredients like chicken broth, skim milk, garlic or Parmesan cheese to add flavour and moisture instead of butter or mayonnaise.

What about vegetables? Candied yams and green bean casserole may be holiday mainstays, but there are other options that let the flavours shine through without all the extras. Try steaming those beans and roasting root vegetables instead. Roasting also brings out the best in Brussels sprouts, which can easily be overcooked using other methods. A mixed vegetable medley with carrots, celery and a variety of colourful bell peppers is packed with vitamins and antioxidants and adds colour to the holiday plate.

And whether it’s a starter or a side, try a salad. Greens like spinach and arugula pair well with reds like tomatoes, cranberries and strawberries for a festive salad. Simply toss with a little olive oil and balsamic vinegar and add a dusting of Parmesan cheese for a festive look.

There’s no resisting a little something sweet at the end of the meal, but a rich dessert can add as many as 400-600 calories. Here are some ways to keep things light and sweet:

– Serve up a naturally light choice like baked or poached fruit or an apple crisp. (Look for a recipe with more oats and less sugar, and throw in a handful of cranberries for some festive cheer.) Meringue-based desserts and angel food cake are also lower in fat than other choices, but can be high in sugars.

– Make some healthy ingredient substitutions. For instance, substitute apple sauce or prune puree for up to half the amount of fat or oil required in baked goods like cakes and cookies. Swap some of the white flour for whole wheat, and try three tablespoons of cocoa powder in place of one ounce of bar chocolate. Top a pie or cake with a scoop of frozen yoghurt instead of ice cream, and use low-fat cream cheese for a cheesecake. To make a lighter whipped cream, try skimmed condensed milk instead of cream.

– Reduce the sugar. In many recipes, you can reduce the sugar by up to a third without a noticeable difference in taste, say experts. Vanilla extract, almond extract or peppermint can enhance the sweetness without the sugar, and cinnamon and cloves can add some spice. Want an alternative to syrup? Try fruit puree instead.

Of course, there’s no rule saying you have to serve a traditional turkey dinner. There are many other mains to choose from, including pork roast, roast chicken or fish. Break with tradition and put together a lighter, healthier menu to your taste.

Get Your Veg On! Plant-Based Recipes a Carnivore Will Love

Easy Ways to Give Your Favourite Recipes a Healthy Makeover