Up Your Game With an Aïoli-Tasting Party 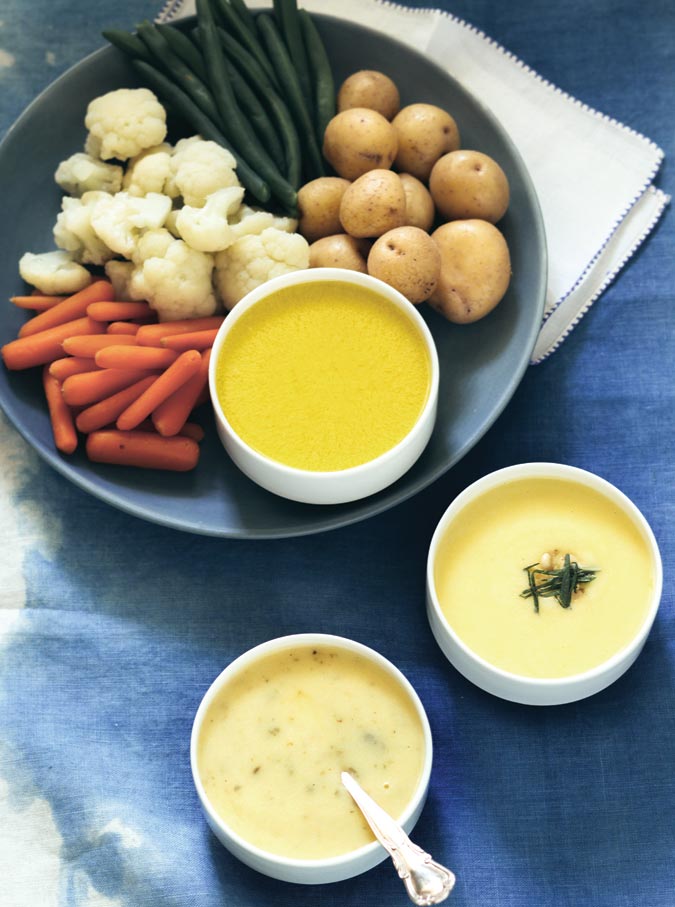 There are many reasons to love aïoli. From the way it rolls off your tongue – EYE–yo-lee! – to the way it slips down your throat. From the accessibility of its ingredients – garlic, oil, eggs – to its stunning versatility.

When aïoli first showed up on the blackboards of bistros in Canada about a decade ago, it was served as an accompaniment to steamed vegetables, meat and fish. Today, we use it as a spread to jazz up our sandwiches, a dressing to turn potato salad into gourmet fare and a dip to make sinful treats such as French fries worth the calories.

Flavour-wise, variations abound. Google aïoli, and you’ll get a million recipes ranging from citrus, herbal and nut-based to chipotle, truffle and wasabi. Walk into a specialty food shop, and you’ll find jars of aïoli lining the condiment shelves.

This seemingly simple concoction is the source of heated debate. When historians write that it is likely a Roman sauce, the people of Provence ignore the memo. Although aïoli is made in other parts of France, Spain and Italy, Provence claims it as its own, a cornerstone of Provençal cuisine.

Then, traditionalists battle modernists about the way the sauce should be made. “With a mortar and pestle!” the former group cries, whereas the latter roll their eyes and reach for a whisk or food processor.

Sparks also fly when discussing ingredients. Can a sauce be called aïoli if it contains eggs?

The dispute arose when, after centuries of using only garlic and oil, eggs were added to make the emulsification process easier. It worked, and today eggs are found in most recipes, but this is where the slippery slope to mayonnaise began. Egg yolks are essential to mayo, which is also an emulsification containing oil, lemon juice or vinegar, and sometimes a dash of mustard.

There is no place for an egg in aïoli, a Provençal purist will tell you. Aïoli and mayonnaise are not one and the same. Interestingly, there is dissention around the issue even in France. In an email, François Millo, co-author of Provence Food and Wine: The Art of Living, photographer and general manager of the Provence Wine Council, writes, “For non-Provençals, aïoli may be a variation of mayonnaise – we call this Parisian aïoli – but true Provençals know better.”

Some true Canadians, such as culinary super-star chef Mark McEwan, disagree. In fact, the Food Network judge, restaurateur and cookbook author scoffs at the idea that up until recent years most boomers had never heard of the sauce. “If you had heard of Hellmann’s mayonnaise, you had heard of aïoli,” he says. “In North America, we think something is exotic, but it’s something structurally the same. It’s a language issue mostly.”

McEwan doesn’t buy into the traditionalist’s view that olive oil and only olive oil must be used. His gourmet grocery store, McEwan, sells small tubs of freshly made aïoli in a variety of flavours, all of which feature lighter oils. “I prefer canola,” he explains. “You want a light layering of flavours so you get a good balance.”

Chef Alex Chen, who heads up Boulevard Kitchen and Oyster Bar at the Sutton Place Hotel in Vancouver, takes a more diplomatic approach. “The characteristics of an aïoli should reflect the characteristics of the chef,” he says, “but it should pay homage to Provence and evoke the cuisine of the sun.” Aïoli is a summertime dish, he adds, so his restaurant starts offering it around this time of year.

Surprisingly, the executive chef at Osco, a Provençal restaurant at the InterContinental in Montreal, is blasé about aïoli rules.

Chef Mathieu Saunier was born and raised in Provence and came to Canada nine years ago to pursue his culinary career. Here, he loves to experiment with his homeland dish, adding not only eggs but sometimes a splash of other sauces such as red pepper coulis. “I want to make the dish better,” he laughs. “But I have no complaints about the aïoli from my past.”

Many of Saunier’s fondest childhood memories involve sitting down with family and friends and devouring aïoli with potatoes, hard-boiled eggs, fish and a staggering view of the sea. Today, in Montreal, when his girlfriend, who is also a native of Provence, gets homesick, aïoli is the only cure.

“No matter how happy you are or how many friends you have, when you come from a different country, sometimes you feel something is missing. This is when Marion tells me she wants aïoli. So I go out and pick up everything and make it for her.”

Saunier gives us yet another reason to love aïoli – it’s just so damn romantic.

With the warmer, more sun-filled days finally upon us in Canada, summer is a fitting time to fête the south of France with an aïoli-tasting party.

Three of Canada’s finest chefs have contributed aïoli recipes you can make up to a day ahead, with platters of food to go with. To serve, begin with Mathieu Saunier’s Basic Aïoli with Steamed Vegetables; then move on to Mark McEwan’s Lemon Caper Aïoli with Fritto Misto di Mare; and finish off with Alex Chen’s Mint and Pine Nut Aïoli with Grilled Lamb. Or create a feeding frenzy and serve it all at once.

Either way, your table will be bountiful, so nix appetizers and instead, greet guests as they do in Provence with a glass of pastis, the anise-flavoured aperitif. Rosé is the official wine of the region, so set out a carafe of it, along with a white. Although aïoli is usually lunchtime fare in Europe, you can choose to hold your party in the late afternoon and early evening when the sun hangs low and its light is soft and diffused. Keep tableware earthy and casual – check out a still life by Provençal artist Paul Cézanne, for inspiration.

Your goal is not to fuss but instead to capture the ambience of a rustic Provençal meal. Aïoli, remember, is a comfort food.

Scroll through for Recipes

– 3 different aïoli as per recipes or three store-bought flavours

– 3 platters – one for steamed vegetables, one for seafood, one for lamb

– 1 fork and knife per guest

– Pretzel sticks to taste aïoli on its own

Set Up and Ambience

– A wooden table with a casual runner or simple white tablecloth; earthenware platters and tasting plates; not too polished cutlery; a simple vase of flowers (perhaps lavender!) Provençal-patterned napkins if desired

– Beside each aïoli, set a place card listing its name and key ingredients

– As an aïoli aficionado, spark debate by sharing the sauce’s history of controversy

– Set out an aïoli and platter. Dip pretzel sticks into aïoli so they can make notes about it on its own then as accompaniment to food. Move from lightest to heaviest – vegetables, seafood, lamb – or set everything out at once, asking guests to record impressions at their own pace

– Tell guests to cleanse their palate with water between tastings

– Ask guests to compare impressions as they move from one pairing to the next, state their favourite and then declare an overall winner

Directions
With mortar and pestle, pound garlic into a paste. Add egg yolk. Stir continuously, adding oil drop by drop and then, as mixture thickens, in steady stream. Alternatively, combine garlic and yolks in food processor. With motor running, slowly add oil in a stream until thoroughly combined, about 2 minutes.

Directions
In steamer basker over boiling water, add vegetables; cover and reduce heat to medium. Check vegetables after about 5 minutes and cook until desired doneness.

Tip: A few hard-boiled eggs on the platter is a Provençal custom!

Directions
In bowl, combine eggs, flour and water; whisk vigorously and refrigerate for 20 minutes. In deep fryer or cast-iron skillet, heat oil to 360 F (185 C). Whisk batter briefly. Working in batches, dredge seafood, shaking off excess batter before frying until golden crisp, 3 to 4 minutes. Remove with slotted spoon to drain briefly on bed of paper towels. Season with salt and pepper and serve with charred lemon and a ramekin of aïoli for dipping.

Tip: Larger fritti, like smelts, should be lowered gently by the tail into hot oil as batter will then take on air bubbles which will prevent fish from sinking in oil and sticking to the bottom of pan.

Directions
In food processor, combine garlic, mustard and egg. Process until evenly combined, about 10 seconds. With motor running, slowly add olive oil, then vegetable oil until completely combined, about 2 minutes. Stop processor and add lemon juice, orange juice and fennel pollen; pulse until thoroughly mixed. Scrape side with rubber spatula and then pulse until all ingredients are evenly incorporated. Let stand for at least 30 minutes before serving. Garnish with mint and pine nuts.

* Fennel pollen may be substituted with ground fennel seeds or omitted

Directions
Season chops with salt and pepper. Drizzle with oil. Heat a grill pan over high heat. Add chops and sear for 2 minutes. Flip chops over and cook for another 3 minutes for medium-rare, 3½ minutes for medium.

Want to rate the various recipes? Click here for the Aioli Tasting Scorecard.