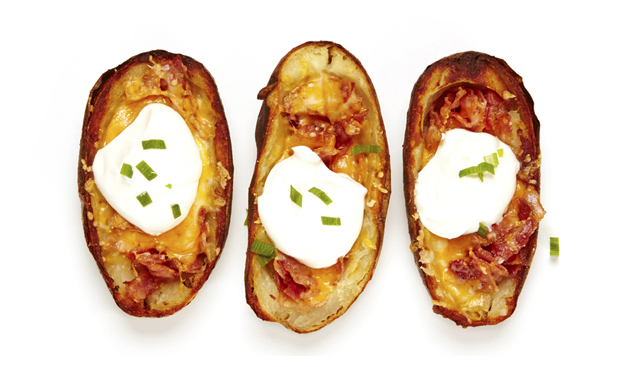 What could be more comforting than the simple spud? Not much, and that’s why we’ve pulled together these perfect potato-centric recipes that’ll both satisfy and surprise. We love bar food, finger foods and easy appetizers. Unfortunately, those usually mean unhealthy and grease-laden. Not anymore, thanks to this recipe for Crispy Potato Skins, addictive skins baked (not fried!) to crisp perfection and mounded high with crunchy turkey bacon and melted cheese.

3) Cut each potato in half lengthwise and scoop out the cooked potato leaving a 1/2-inch thick layer of potato along the sides and bottoms of the skins. Discard scooped out potato or use for mashed potatoes.

4) Brush the hollowed potato skins (inside and outside) with melted butter and sprinkle with salt and pepper. Place potatoes skin-side-up on baking sheet and return to oven for 10 minutes. Flip the skins and bake another 8 minutes. How do you pump up the flavor in your soup? Roast the vegetables, as evidenced in this extremely easy and tasty Sweet Potato, Parsnip & Apple Soup. The sweetness of the roasted potatoes and parsnips, combined with intense apple cider and mild shallots, creates a hearty and delicious soup that is guaranteed to deliver satisfying spoon after spoon.

2) In a large soup pot, bring vegetable broth and apple cider to a boil over medium-high heat. Add sweet potato mixture and simmer for 10 minutes. Remove from heat and using a handheld or countertop blender, puree until smooth. Return to soup pot over medium heat and stir in butter, ¼ tsp salt and pepper. Garnish each soup bowl with diced apple and parsley. I love rosemary, both Clooney and the herb. For our purposes I’ll refrain from discussing that the former sings our toe-tapping anthem, “Sisters.” Instead, I’ll move on to the latter, a fragrant herb with a great rep. Known for improving memory, relieving muscle pain, curing indigestion and making hair grow (note: source not the AMA), rosemary is a powerful, needle-like leaf. In the culinary world this highly aromatic branch makes everything herbalicious, including this simple but satisfying side dish. Tossed with baby potatoes, Dijon mustard, lemon juice and garlic, rosemary boosts the flavour of these crispy-crusted, tender taters. Served up on a regular basis, “Come On-A My House” (sorry, it’s the other Rosemary again) and taste this perfect combination of woody rosemary and golden brown potatoes.

2) Cut potatoes in half, or if they’re large, in quarters. Place in a large bowl and add olive oil, mustard, rosemary, lemon juice, garlic, salt, pepper and cayenne. Toss well to coat. Spread potatoes in a single layer on prepared baking sheet disregarding any excess dressing. Roast potatoes 15 minutes, turn them and roast an additional 15 minutes until crusted on the outside and tender inside. Serve immediately. Looking for one hot potato? These Double Baked Stuffed Baked Potatoes bring major pizazz to the oft-times boring spud. Baked to perfection, the creamy insides are scooped out, mashed with butter and mixed with cheese and sour cream. The potatoes are then re-stuffed and baked until golden brown beauties emerge!

2) Scrub each potato and pat dry. Use a fork to pierce each potato in several places. Bake the potatoes directly on the oven rack for 50-60 minutes or until tender and easily pierced with the tip of a knife.

3) Remove from oven and cut the potatoes in half lengthwise. Using a small spoon carefully (don’t go too deep or you’ll rip the skins) scoop out the flesh from inside the potatoes and place in a medium bowl.

4) Line a baking sheet with aluminum foil. Arrange potato shells on baking sheet and return to oven until they are slightly crisp, about 10 minutes. Meanwhile, using a potato masher or fork, mash potato flesh and stir in sour cream, cheddar cheese, butter, salt and pepper.

5) Spoon potato mixture back into the potato shells mounding them high and sprinkling each potato with Parmesan cheese. Bake for 15 minutes. Lisa’s food IQ is way off the charts. We’re talking, she’s like, the Stephen Hawking of sustenance. Who else would think to create a recipe for a sandwich stuffed with potato skins, cheese, sour cream and bacon? Who else would be so considerate to give you a one-handed meal so you don’t have to break from World of Warcraft? No one, darn it. So grab your 2-liters of Dew and DO IT!!! This healthy and hearty Sweet Potato Quinoa Bowl, a creative combo of protein-packed quinoa, roasted sweet potatoes and avocado, is drizzled with a maple dressing and topped with roasted almonds, an egg and leafy sprouts.

2)Preheat oven to 425°F. In a mixing bowl toss together cubed sweet potato, olive oil, salt and pepper. Place sweet potato on a parchment-lined baking sheet and roast 16-18 minutes, until potatoes are tender. Remove from oven and set aside.

3)Meanwhile, in a medium saucepan, combine quinoa, water and salt. Bring to a boil over high heat. Reduce heat to a simmer, cover and cook 12-15 minutes, until the liquid is absorbed. Remove from heat and let sit covered for 5 minutes. Combine quinoa, roasted sweet potatoes, avocado and a few spoons of dressing. Divide between 4 serving bowls, top with almonds and drizzle with more dressing.

4)Finish each bowl with a fried egg placed on top and sprouts to garnish. Authors of bestselling cookbooks Bite Me Balance, Bite Me, Bite Me Too and Lick Your Plate, saucy sisters Julie Albert and Lisa Gnat love eating, feeding, entertaining and dishing up easy recipes at BiteMeMore.com