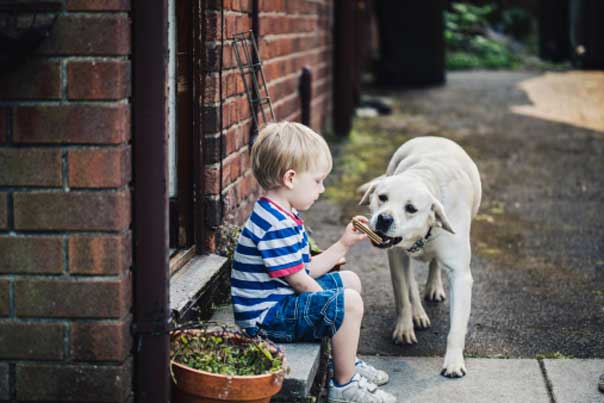 Does your pooch have a good opinion of you?

A recent study shows that dogs get information, especially about food, from watching and listening to how people interact with each other.

They use this information to discriminate between nice people worth approaching and wagging for and people who aren’t so nice and best avoided.

Researchers at the University of Buenos Aires set up a situation where dogs could “eavesdrop” on what was happening between two people.

One group of people played “beggars” who asked for food. The other group consisted of “donors.” One set of “generous” donors always gave beggars who approached them a cornflake. Another set of “selfish” donors refused the donors and turned their backs on them.

Dogs were restrained while watching the exchanges between the pairs. When they were released, more approached the generous donors than the selfish donors.

Even when the people in the different roles were switched, the dogs’ preference for the ones who were generous remained the same.

Another part of the study proved what dog owners have always known — pretending dog food is sooo yummy before feeding the dog.

Dogs watched donors offering beggars bowls of cornflakes. Some beggars ate the cereal with obvious relish. Others made clear they found the cereal disgusting and rejected it.

All this builds on previous research showing that  dogs can discriminate between a smiling face and a neutral face, between an expression of happiness and one of disgust, and they can use that information to find food.

But it’s not only about food. Dogs recognize sad reactions in people and approach a crying person relative to another who is speaking or singing.
The entire report of the study can be found here.