In the Spirit: Take Me to Church 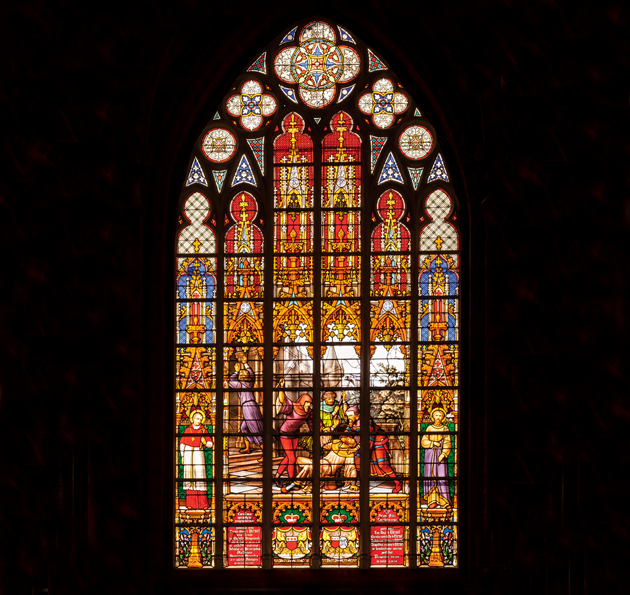 Here, how a belief in God can go beyond the gospel truth.

My eyes fill with tears every time I hear “Amazing Grace.” Watching Barack Obama break into an a cappella version at the funeral for the Charleston pastor and his bible study group gunned down last year had me blubbering alone in front of CNN: for all his oratorical splendour, he is not a natural singer, but the raw authenticity struck a chord.

The words in the song that nail me every time are “How precious did that grace appear/The hour I first believed.”

I believe in God. Amazing how many years it took for me to say that to myself, let alone out loud.

And amazing how radical it feels to me, after half a lifetime of being more concerned about being cool and intellectually superior to what I long considered sheep-like behaviour.

But grace did come to me one day, all of a piece, sitting on a hard pew in a soaring church in Quebec City, with the morning light of a crisp fall day streaming through a stained glass window. The hour I first believed came in the form of a physical lightness and a freedom. No question it was a gift. To me, it felt as if I had finally grown-up.

I have work to do to earn this grace. I’m a great admirer of Karen Armstrong, the comparative religions scholar. bestselling author and former nun. Her book about renouncing her vows is called The Spiral Staircase, after the T.S. Eliot poem “Ash Wednesday” in which the author painfully climbs upward toward salvation.

She doesn’t mince words: “Religion is hard work. Its insights are not self-evident and have to be cultivated in the same way as  appreciation of art, music or poetry must be developed.”

Boomers are no strangers to spirituality. They are also iconoclasts, rebels and individuals and demand efficient, quantifiable answers. But what if the era of alternative New Age forms of enlightenment – from meditation to yoga to crystals to Oprah – is drawing to a close?

After witnessing the awed reception Pope Francis received on his recent American tour, there is little doubt the Pontiff brings a groundswell of goodwill and refreshed energy not just to his own Catholic flock but to the rest of us. We are simultaneously dazzled and humbled by his tactile, humanist approach. I myself have an image of the people’s pope on my key chain, carried in a completely unironic way.

In his book Signs of Warning Signs of Hope, Kerby Anderson wrote about what he calls baby boomerangs, who are coming back to the faiths of their childhoods. He describes how secularization marginalized religious institutions in the ’60s and ’70s. And how pluralization simultaneously expanded everyone’s world view.

“This increase in choice led naturally to a decrease in commitment and continuity,” he wrote of the generation. “Spiritually hungry for meaning, [boomers] dined heartily at America’s cafeteria for alternative religions: est, gestalt, meditation, scientology, bioenergetics and the new age.

Others sought spiritual peace through 12-step programs for alcoholics, workaholics, even chocoholics. This have-it-your-way-salad-bar spirituality has been high on choices and options but low on spiritual commitment.”

While there has been a steady decrease in religious attendance and a rise (now about 21 per cent) of Canadians who identify as religious “nones,” there are signs that boomers are changing their minds. Faith itself has taken on a different, less rigid format: Pollsters are starting to find people reporting belief in an unaffiliated manner. There is also big growth in “unbranded” urban churches, beyond the stodgy old denominations.

In defiance of the “troubled times put bums in seats” theory, a 2010 Gallup poll showed Americans’ self-reported church (or synagogue or mosque or temple) attendance inched up in 2010 as the economy improved. These numbers are greatest for the 65-plus set, at 53 per cent. Those aged 50 to 64 were at 43 percent. The pollsters predicted that these numbers will go up, as religiosity has long followed a pattern of rising at retirement age. The Canadian data is a bit older (2005) and broader. Among Canadians 45 and older, 22 per cent attended on a weekly basis; this rises to 37.4 percent after age 65. About half of Canadians attend some form of services at least once per year.

Look, this isn’t brain surgery: according to death apprehension theory, there is a strong positive correlation with religiosity and fear of one’s own death. Yes, more bad stuff happens to us the longer we live and, sure we need to cope. Religion can be one of those coping tools.

My brand of live-and-let-live holds that I don’t believe I will literally have tea some day in paradise with my beloved Gram, or indeed that there are likely any Pearly Gates in my future. For me, now, religion is about living life better. And I believe in your right to believe whatever the heck you want.

I attend Deer Park United Church at Yonge and St. Clair in Toronto. This is a newish thing: I began going with a boyfriend about five years ago. It is not something I generally bring up in conversation, for I can’t bear proselytizers: this is personal for me.

I’m not winning any regular attendance award nor do I participate in community functions beyond a really cool tour of the organ pipes in the church attic. I have no scholarly prowess in theology and, as for the Bible, I have read Genesis (which is spectacular) but am dodgy on much of the rest of the stories, piecing things together on the fly.

For a few years, I also went to a funky little Anglican church downtown called St. Matthias, where they did pet blessings (some parishioners left dog bowls in the pews); the very urban and ethnic mix of  of Queen Street West made for one of the oddest and sweetest nativity pageants I’ve ever seen.

Deer Park United is more straight-laced, an amalgamation with Calvin Presbyterian; the two congregations share space and the respective reverends swap out Sunday sermon duties. And this is what has happened as congregations dwindle, and it appears to be a successful experiment: there is new energy as rituals and traditions are sewn together.

In fact, the United Church of Canada was formed in 1925 out of an earlier union of Methodist, and the Congregational union and part of the Presbyterian Church of Canada, so this current mash-up isn’t so strange.

It took a long time for me to summon the inner stillness to appreciate sermons. But I feel open now, which is a lovely place to be.

I’m not really returning to the fold: I was duly baptized and confirmed as a child, but it was more akin to going to baton lessons. I have but one fleeting memory of a Sunday school class where we crafted God’s eyes out of Popsicle sticks and Phentex ombre yarn. Religion wasn’t an organic part of our lives: It was the 70s, and my little nuclear family from Pickering fit right into the demographic of white Canadians becoming perfunctory and then peeling away from institutions into the chaos of secular life amid the boomer earthquake of social change.

It was in my young first marriage, to the son of a preacher man, wherein I first really participated in church.  We were at university and likely hung-over most Sundays visiting Kingston where his father manned the (Anglican) pulpit. I loved the Reverend Hendra’s enveloping voice and happily let the experience wash over me while dandling nieces in my lap.

The intervening decades saw me marry a non-practising Jew, and we had two children together. I didn’t consider baptizing them or even raising the issue.

Frankly, this story is a first step to try to articulate my own faith so I can explain it to them. In those years, I crossed the threshold of a church (or synagogue) only for weddings and funerals.

I have grown to treasure going to church with Bob, my partner today. Bob was widowed young and tragically and then raised three kids on his own. Church is a meditative time for him, and I have been intensely moved in sharing that space in the pew beside him. Bob’s faith is his own story to tell, but I find myself drawn to his quiet confidence in the matter.

This is what I love about going to church: I love the predictability, following along with the order of service in the bulletin, reading the announcements about potlucks and flower arrangement credits.

It fulfills a yearning for simplicity in my over-extended life stage, with a quintet of teens and young adults in a newly blended household in which I am predictably making loads of missteps and blunders. I like the formality, the stained glass, the ponderous organ, the giggly children’s circle and the gravity of Communion. I like the bit where you shake everyone’s hand to offer the peace, the processionals and the tea and cookies afterward. Ecclesiastical songs in United Church world can be hauntingly beautiful or dour, and either way I like the rhythm of standing up and singing along softly in my dreadful tone-deaf way.

And the people at church are astonishingly welcoming: I’ve never been a joiner, but church is a pursuit you can do alongside other people yet alone. As in any crowd, everyone contributes their energy to the room: in this room, the energy of prayer is wildly positive.

By the end of the service, I always feel better, lighter, clearer and recharged. It is the letting go of the dumb little stuff and taking a few minutes to think about something larger than my own navel.

I’m okay today with wearing the disdain of some of my literary heroes. It has taken decades to reconcile my attraction to Sartre and de Beauvoir and the crisp, clean arrogance of the Godless world of their Existentialist cabal.

In my youth, I cared very much what Virginia Woolf had to say about religion, for instance. See here how she roasts Eliot for converting late in life from Unitarianism to Anglicanism: “I have had a most shameful and distressing interview with dear Tom Eliot, who may be called dead to us all from this day forward. He has become an Anglo-Catholic believer in God and immortality and goes to church. I was shocked. A corpse would seem to me more credible than he is. I mean, there’s something obscene in a living person sitting by the fire and believing in God.”

In counterbalance, I look to a few voices, such as Evelyn Waugh, C.S. Lewis and Graham Greene, who all famously bucked the atheism trend among early 20th-century intellectuals to embrace religion, also later in life. I particularly cherish Greene’s line: “I had to find a religion to measure my evil against.”

Yet I have the hardest time with acerbic essayist Christopher Hitchens, whose work I otherwise love. Hitchens remained the world’s most strident atheist right to the end of his battle with cancer.

But atheism is like shooting fish in a barrel, Hitch. You can’t prove there is a God. And that is the gosh-darned beauty of it all. Faith is a blind leap.