Dying Large: Putting the ‘Fun’ in Your Funeral 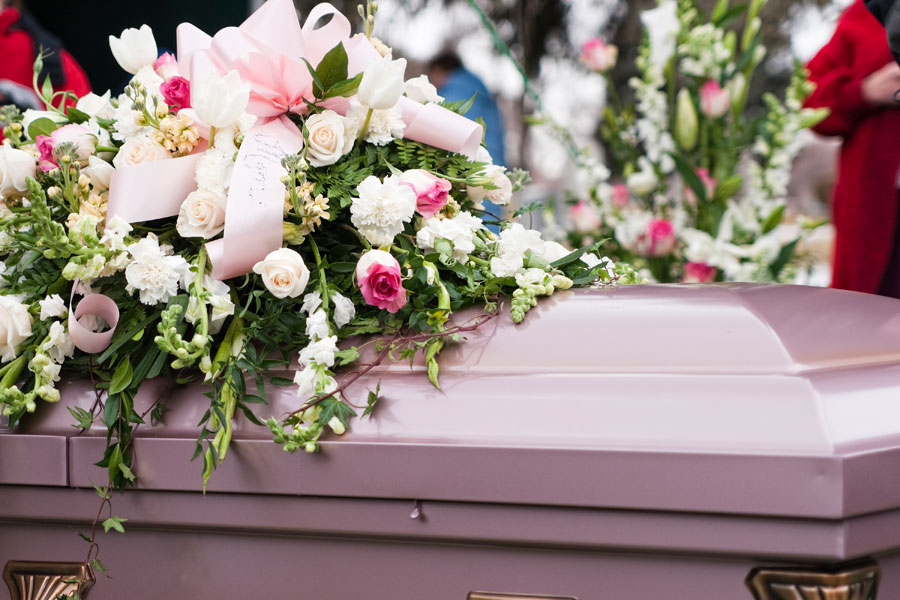 Graciously, Wendy Dennis lets us in on the dream funeral.

I must have crossed some kind of age threshold because when I go to funerals lately, I start thinking about my own. It’s not the dying part that scares me. It’s the numbers I’ll draw for the service. I’m sitting in the sanctuary, the place is packed and some relative is up at the podium going on about how wonderful the dead person was and how much they gave to the UJA. I start taking a head count and doing the math. When the funeral is over, I call my daughter and tell her that when my final curtain’s fallen, I want her to hire extras.

She hates when I talk like that, but I don’t think you can be too careful about the optics of your own demise. For instance, if I die in a horrible accident, I want my handlers to know that they are not under any circumstances to let anyone mark the spot with teddy bears or carnations, tell my loved ones that I’m “in a better place,” hold a “life-affirming” remembrance for me or deliver one of those treacly eulogies that make people wonder if they’ve walked into the wrong funeral.

There ought to be a law against delivering a crappy eulogy. I can’t tell you how many funerals I’ve sat through wishing that the Law & Order crew would burst into the sanctuary, handcuff the offenders and read them their rights — especially that one about remaining silent. When someone is charged with the honour of delivering the last words that will ever be spoken about another human being, I think they have a moral responsibility not to mention their recipe for meatballs.

I get my views about dying from my mother, who was completely unsentimental about death. My mother had a position on death: she was against it. But given that she didn’t have much choice in the matter, she focused on more practical concerns, like letting it be known how she did and didn’t want to go.

She had it all mapped out. She hoped to go quickly and painlessly — preferably after a couple of smokes. And when the time came, she wanted to look sensational. She always envied Vivian Rotenberg, who keeled over from a heart attack in the middle of a bridge game with her makeup and hair freshly done. “I heard she won her hand,” my mother used to say.

My mother made her final wishes known — down to the last detail: when she wanted the plug to be pulled and which of her three daughters had to pull it (“You have to do it,” she told me. “Joanie will get too emotional, and Nancy will forget”); who would deliver her eulogy (her granddaughters); and how many shovelfuls of earth would cover her coffin (“Three max, four if you get pressure”).

She had no patience for a ritual that had grown increasingly common at Jewish funerals over the years, whereby friends and relatives shovelled earth onto the coffin until it was completely covered. She couldn’t see the point of making her loved ones hang around the cemetery when they could have been back at the shiva house scarfing back bagels and coffee. (My people have long believed in countering loss with overeating.)

My mother was such a successful executive producer of her own death that I intend to follow in her footsteps. I’m leaning toward an understated affair — a preference that puts me wildly out of sync with my baby boomer contemporaries, who are orchestrating Busby Berkeley farewells.

Funeral homes now offer elaborately produced tribute videos (with HDTV for optimum viewing), “remembrance tables” to display personal items and the chance to release a dove on your loved one’s behalf to the tune of the Temptations’ “I’m Really Going To Miss You.”

According to the Pittsburgh Post-Gazette, at one funeral, a casket was wrapped in brown paper and string and stamped “Return to Sender.” At the visitation of a Texas entrepreneur, steaks sizzled on the barbecue, while a margarita machine dispensed drinks at the burial plot. Some companies combine ashes with cement to create undersea “memorial reefs,” while others arrange for people to rocket their ashes into outer space, like Star Trek creator Gene Roddenberry, LSD guru Timothy Leary and gonzo Rolling Stone reporter Hunter S. Thompson. One man planned to have a Viking funeral where his ashes would be placed in a wooden boat, which would then be set on fire and floated on a river.

It was bound to happen, of course. We of the Woodstock generation, who protested and experimented and embraced alternative everything, have long been interested in pushing the limits of self-expression, and our desire to noisily overturn convention is unlikely to stop just because we’re facing the big chill.

Certainly, countercultural icon Ken Kesey and Beatle George Harrison said screw the boring service and pancake makeup, choosing instead to be laid to rest in more singular ways. Harrison asked to have his ashes scattered on the waters of the River Ganges, while Kesey was buried on his Oregon farm in a Day-Glo pine box built by friends who told hilarious stories from his Merry Prankster days. He lay unembalmed in the casket wearing a Grateful Dead Steal Your Face beret and a pair of cowboy boots.

As a child of the ’60s, I’m touched by both of these farewells, probably because they’re so true to the person they’re meant to honour. What I’m not a fan of is the theme park exit where they stamp your hand and give out party favours. It’s way too much like death by Chuck E. Cheese to me.

In the end, I’m thinking of going with a classic Jewish funeral. I’m the least religious person I know and very much a child of my time, but I have always found that service to be eloquent and moving. And let’s face it — it’s not a trendy send-off; it has stood the test of time.

Accordingly, I would never dream of messing with the Mourner’s Kaddish, a prayer that, to my mind, is one of the most hauntingly beautiful ever written.

Still, after the words have been said and the prayers have been sung, there’s really only one person I want to sing me out, and that’s Bob Dylan. I was thinking of something from the Tell Tale Signs album, something mournful and moving like “Red River Shore.” I can’t think of a finer way to go out.

Still, while I lean toward the classic farewell, there are aspects of dying large that definitely appeal to me. I’ve long hankered, for instance, to have one of those New Orleans jazz bands to play me out, and I’m toying with the idea of revamping the shiva menu in favour of something a little more foodie in tone — a move some critics would consider wildly radical.

Other than that, all I have to do is figure out how to jack up the numbers, but I’m working on an angle for that.

A version of this article appeared in the Winter 2010 issue with the headline, “Just a Closer Walk with Thee,” p. 24-25.