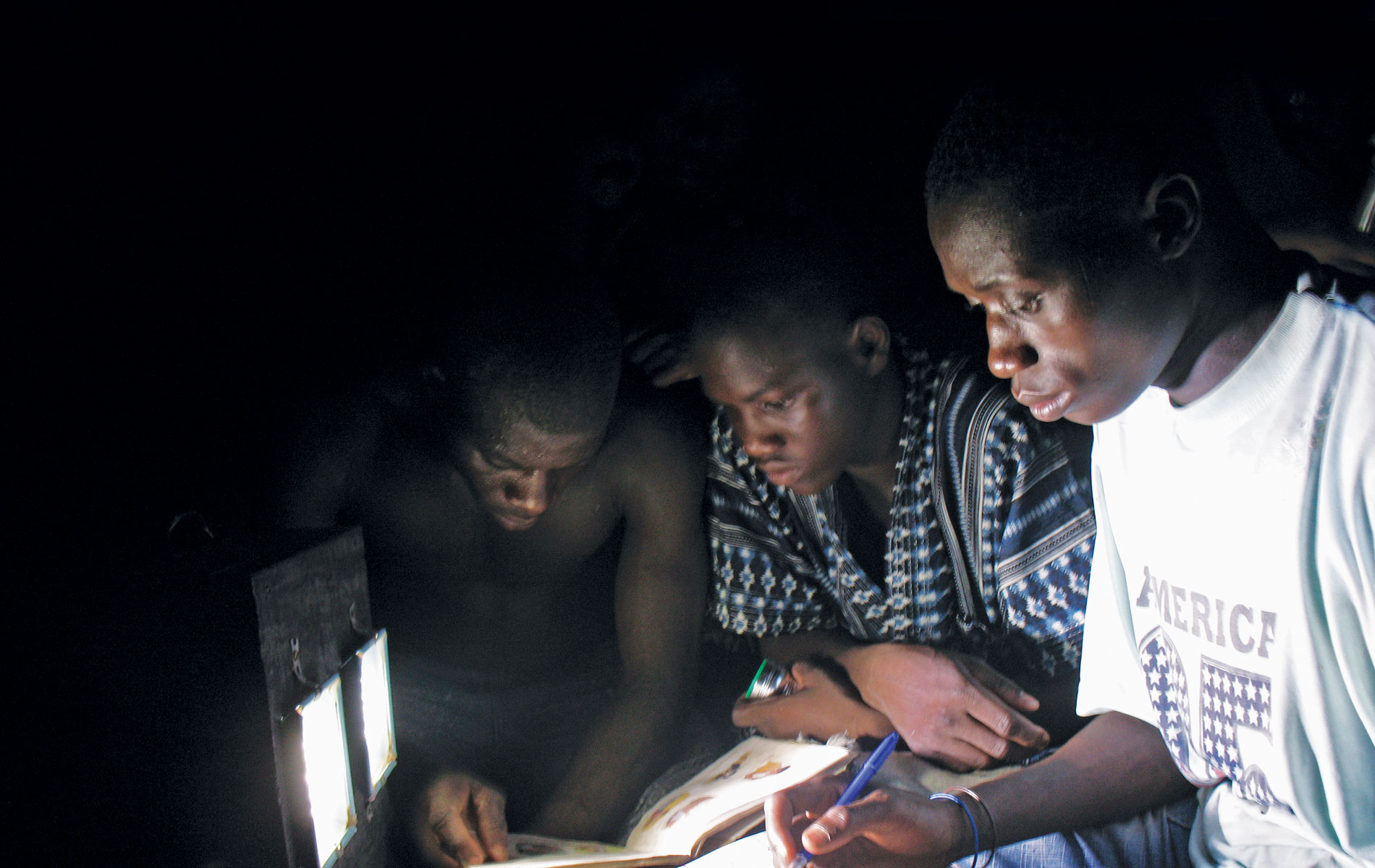 A Canadian electrical engineering professor turns on the lights for impoverished people around the world.

A nurse in Ghana steps out of her home one morning to find village children asleep under a newly erected lamppost, their schoolbooks scattered around them. Thanks to a Calgary-based foundation called Light Up the World, it was the first time they had been able to read at night.

Over 10 years, the foundation has brought low-cost, reliable lighting to 20,000 homes, schools and health units in more than 40 countries. In 2002, its founder, Dave Irvine-Halliday, now 66, received the US$100,000 Rolex Award for his determination to bring affordable electrical illumination to the developing world, where two billion people have none. He promptly spent the money on projects in Nepal, Sri Lanka and India. Until then, he and his wife, Jenny, had been digging deeply into their own pockets.
It all began in 1997, Irvine-Halliday tells Jayne MacAulay. The Scottish-born electrical engineering professor, on sabbatical leave from the University of Calgary, had been asked to help set up the electrical engineering degree program at Kathmandu’s Tribhuvan University. That done, he went mountain trekking and stumbled on a new mission in life.

I didn’t go to Nepal with any idea of lighting up the world. It never occurred to me. I had time to spare, so I decided to do the Annapurna Circuit. It’s about 200 miles through Thorung La, a pass that’s about 17,000 feet above sea level. I just wanted to take photographs and stay at the tea houses.

I was being introduced to my porter’s relatives. There was one old couple, swathed in many layers of clothing. The only time I actually saw their faces was when this tiny fire would settle, and you’d get a spark and a little bit of light. After that, it was dark. That may have planted a seed in my head.

But this was the instant my life changed: I was wandering down this hillside, enjoying Himalayan vistas, and I heard these kids singing. It was a wee village with a one-room school, but I popped my head into its window and then I thought, “How can they read in this darkness?”

Was there anything I could do to help? Incandescent is no good. It’s the simplest kind of lighting system, but you get a lot of heat and very little light. Fluorescent is a lot more efficient but a bit fragile. Then I thought, “Wait a minute! I’m an expert in LEDs (light-emitting diodes) for fibre-optic communication.” LEDs in fibre optics use a different wavelength, invisible to the human eye, but LEDs live an incredible length of time — decades.

Everybody knows televisions and monitors are made up of red, green and blue dots. You vary the ratio of intensity and can get any colour under the rainbow. So I thought, “I’ll get hold of some different colours of LEDs, vary the brightness, put them close together and mix the light, and see if I can get whitish light.” About nine months after I got back to Calgary, I came to the conclusion that even though I’d made white light with these LEDs, the lighting was pathetic.

Then I found that Nichia, a Japanese company, had invented a white LED, a diode, for illumination — for actually being able to see to do stuff. I explained that I had this project in mind for the developing world, and they sent me a couple of dozen samples. I’ll never forget the day we got them. My technician at the University of Calgary, John Shelley, and I went down to the lab. The system is simplicity itself: a power supply (a battery that is recharged by solar panels), a wire, your LED and then back to the power supply. First, we sat for 20 minutes in the dark and then we switched them on. If the moment of conception was in Nepal, the “eureka” moment was in my lab. We’d set up a paper with some type on it. An old fart like me (I was 56 then) could see every single character perfectly well. I looked at John and said, “Good God, John! A child could read by the light of a single diode.”

I didn’t intend to go back to Nepal until 2000, but these Nichia diodes totally changed the whole thing. I told my wife, “Jenny, I’m going back in 1999. I don’t care what I have to do — borrow money from the bank or whatever.” And she said, “I’m coming, too.”

We travelled for about three months and visited many villages. We’d sit there with a kerosene wick lamp, about the same light as a birthday candle, and then we’d blow it out. We’d sit in the dark and talk to them via translators about this new light and its advantages, and then we’d switch it on.

When you see the look on people’s faces when they realize that for the first time in their lives they could actually see around their whole house and see to cut up the vegetables — it’s life-changing. Jenny and I looked at each other, and I basically said, “I know what we’re going to be doing for the rest of our lives.” We had been given a gift — one daft little idea that turned out to be not so daft in the end.

I just felt that even if I didn’t try to light up the whole home to North American standards, maybe I could make a difference. After a couple of years, we started to realize the importance of lighting and microenterprise — the effects on health and safety and lots of other things. But if it’s not affordable, all it is is some professor at a university just playing around. When people pay the same amount to some local company using microcredit as they are paying for their kerosene and do that for a year or even two years, they’ll get much brighter, healthier, safer light and, at the end of that period, they’ll have virtually no lighting costs.

I’m determined to light up the world, including Afghanistan. I returned from Kandahar in February 2006 and Capt. Nichola Goddard was killed there in May. Her father, Tim, also taught at my university. I didn’t know him, but I wrote a letter in which I said there was a real opportunity to let his daughter’s name live on through helping to bring light and education and economic prosperity to Afghanistan. I was afraid he would take offence. Tim said it was a first-class idea.

The Light Up the World (LUTW) board decided Afghanistan was too difficult. But Nichola was born in Papua New Guinea and spent her first few years there. Hundreds of first-aid or health units there have no light. A little five-watt panel and a couple of lamps would do a fantastic job for each one of these little units. And that’s what we’ve done, all through donations. Last May, we had the Nichola Goddard fundraiser in Calgary; we were hoping to make maybe $10,000 to $40,000. We cleared something like $118,000.

Following a talk at a conference in Durban, South Africa, in 2005, Jenny and I went to Johannesburg. I wanted first-hand knowledge of shantytowns. At Tembisa, we met Michael Mohlala and his wife, Poulina, who used candles and kerosene for lighting — about US$150 a year. That’s basically the one-time cost of our system. We left them a lighting system because they were so kind, answering all kinds of silly questions and introducing us to neighbours. The shantytowns of South Africa have no electricity but are surrounded by the street lighting of Johannesburg. Michael later wrote and told me that with all the blackouts in Johannesburg, when all the lights go out, his home is the only one that has light.

We were back there in six months with seven systems and met with neighbouring families. I said, “I’ve made a little contract. It says you will pay my colleague here what you pay for kerosene. But as soon as you’ve paid the first month, his company will come within 24 hours and install the system.”
Muhammad Yunus [who won the Nobel Peace Prize in 2006 for his role in developing microcredit] says the poor always pay back. You just have to give them the chance. In Tembisa, the first family paid it in three months; the last took about 14 months because of health problems.

One of my goals is to find the seed funding to start the whole process. I’d have a new system designed to get the economies of scale and cut costs in half. Then I’d have the inventory to work with a microcredit organization that would collect the money for the lighting systems.

That’s the only way you’re going to light up the world. You’re not going to do it with a small organization because you only light a few thousand homes a year. And we have to work like heck just to get the funds to purchase the equipment. It’s got to be done through the marketplace.

One of our original lamps had about 20 lumens of light. You could read a book or light up a small table. Now our lamps are 100 lumens for the same one watt — five times as efficient. That’s why it’s so frustrating. If you just had the seed funding, it would blow this thing wide open. Look at India — 300 million people who are not attached to the grid.

I love my work with fibre optics and bio-photonics and all that, but LUTW is totally different. You’ve only got to see how it changes one life.

A version of this article appeared in the April 2009 issue with the headline, “Bright Idea,” p. 22.