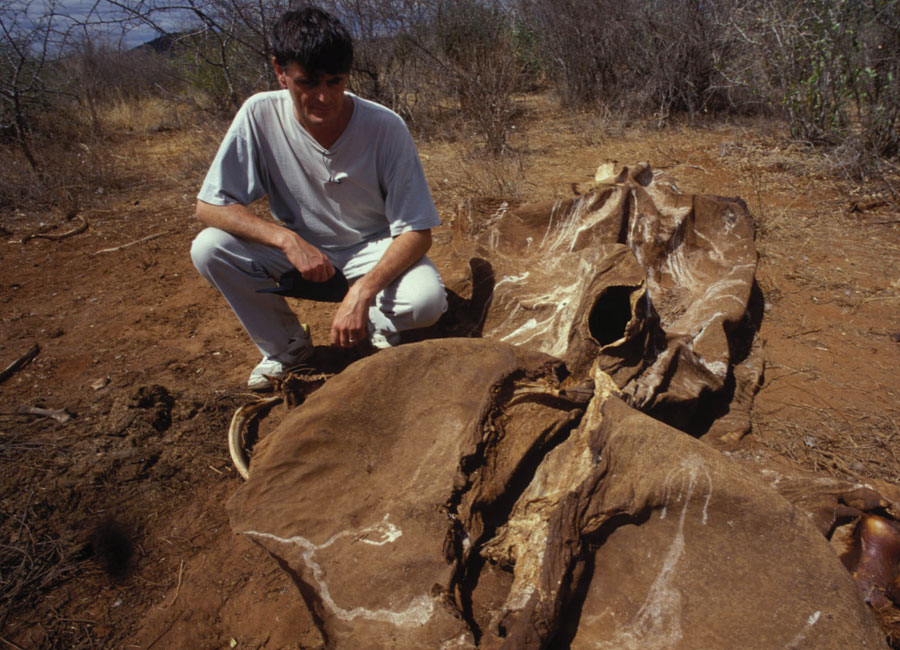 On March 9, 2009, a special meeting of the International Whaling Commission (iwc) was held in Rome. The IWC is the body recognized by the United Nations as responsible for the conservation of the great whales. Dr. William Hogarth, the U.S. Commissioner, a political appointee of former President George W. Bush, addressed U.S. environmental and conservation groups in a soft southern voice.

“I just want to be open and fair to everyone,” he said. I wasn’t going to let that pass. As chairman of the IWC, Hogarth, over the past 18 months, had instigated a behind-closed-door process in which he produced “options” — endorsed by not a single IWC nation — that legalized Japan’s whale hunts without requiring any concessions from Tokyo. For 21 years, Japan ignored the IWC’s whaling ban and continued commercial hunting, claiming it was “scientific research,” though the whale meat was all sold by Japan’s three largest whaling companies.

“Dr. Hogarth,” I said, “The week after President Obama took office, he issued a directive to all government departments to ensure transparency and accountability. The process you have led excluded input, comment or review by every environmental and wildlife group in the U.S. and the rest of the world, before you proposed options that are highly favourable to Japan’s whale hunting.”

Hogarth frowned. “Our goal is to reduce the number of whales being killed,” he said.

The Obama representatives from the White House Council on Environmental Quality and State Department listened carefully as Hogarth sought support from his deputy, Doug DeMaster, a scientist. “But, Dr. DeMaster,” I continued, “isn’t it a fact that under the options put forward by Dr. Hogarth, the number of whales killed by Japan and other countries may go up?”

President Obama has expressed support for continuation of the ban on commercial whaling and supports measures to end Japan’s unilateral hunts. But in the next year, the fate of the world’s great whales and the African elephants will once again be up for discussion. Undercover investigators for the Environmental Investigation Agency (EIA) ­— an organization I had set up, first in London and, then, in Washington, to investigate environmental crime — have already been gathering evidence in Africa of illegal ivory trade. We have also successfully persuaded more than 2,500 supermarkets in Japan to stop selling whale meat.

In the mid-1970s, while living in Vancouver, I teamed up with the fledgling operation of what would become the world’s best-known environmental group, Greenpeace. In late 1976, I was sent to London, U.K., with a few black and white photos of our campaigns to protect whales and seals in my pocket. There, I set up an office that would become the base for Greenpeace’s European work. Within a few months, my life savings were running out fast when Spike Milligan, the famous British comedian, offered his help and asked George Harrison and the other former Beatles for much-needed funding. Harrison sent the first in a series of grants that enabled me to finance the London office, and cheques from Lennon, McCartney and Starr arrived. Twiggy, supermodel-turned-singer, donated the proceeds of a concert.
By then, 50,000 great whales were being killed legally and illegally annually.

In Africa, a devastating slaughter of the African elephant was sweeping south across the continent, wiping out hundreds of thousands of elephants to feed the global ivory trade.

In January 1978, Greenpeace UK purchased an old fishing trawler. A complete refurbishment ensued, and the rusting boat was transformed into the Rainbow Warrior, named after a Hopi Indian legend that prophesied that warriors of the rainbow would come to heal the earth.

We sailed first to Iceland and later Spain, positioning our inflatable boats between whales and the whalers’ harpoons to disrupt their hunts and publicize the need for a ban on killing the over-hunted animals.

Eighty miles off the coast of Iceland, we saved our first whale. A whaling boat started chasing its prey — two huge fin whales — and we raced our little inflatable boats across the choppy ocean into their firing line. As the two huge creatures breached the surface, everything went into slow motion. I could see the beautiful pinkish skin of the whales and the fine mist shooting from their spouts against a perfect blue sky. Then the harpoonist slammed the safety catch back onto the harpoon. We had prevented the kill and saved our first whale. It was the first of many such confrontations. In 1986, a ban on commercial whale hunting passed by the International Whaling Commission came into effect, and Iceland ended its whale killing.

It should be noted that the Rainbow Warrior would become the most famous boat in the world after a series of highly publicized international campaigns against killing whales and seals, dumping radioactive waste in the oceans and continued testing of nuclear weapons. In 1985, France’s President Mitterrand ordered the boat to be bombed for its planned protest against France’s nuclear weapons testing in the Pacific.

Whales were safe for now, but in Africa the elephants weren’t as lucky. By the time I went on my first investigation into illegal ivory trade, at least 70,000 were being poached each year to feed the demand for ivory trinkets and carvings in Japan, Europe and North America. By this time, I’d left Greenpeace and, in 1984, set up the EIA.

After the ban on commercial whaling came into effect, I followed up leads I’d obtained about poached ivory being smuggled on boats from East Africa to the Middle East and then on to Asia. The Convention on International Trade in Endangered Species (CITES) is the international agreement intended to prevent destruction of populations of wild animals and plants through
excessive international trade. However, CITES was far from a protector of elephant herds. In fact, the organization had legalized more than 450 tons of ivory, which became interchangeable on the open market with illegal stocks. In other words, ivory smugglers could sell illegal tusks with legal paperwork obtained, in some cases, with bribes. Buyers could not tell the difference. This would accelerate the killing.

It was time to go undercover. Posing as a filmmaker, I flew to Dubai in the United Arab Emirates where the EIA team secretly filmed two secret Chinese ivory factories, where 65 carvers worked from dawn to midnight on poached ivory that was then shipped to Hong Kong and Taiwan. We found a warehouse that overlooked the ivory factory and shared a common wall. I put our film team in a big cardboard box on a wooden pallet and persuaded the warehouse manager to use a forklift to raise the box within sight of the ivory factory floor. The manager was only told that we needed this angle to allow them to get artistic shots of his operation for our “film on new trade in Dubai.” Once inside the box, EIA’s cameraman and photographer carved a hole and began to film. We obtained the first evidence of the hidden operations that moved 130 tonnes of ivory a year from Africa to Asia, easily evading CITES controls. At the airport, we acquired and copied airway bills detailing shipments of poached ivory to Taiwan.

A two-year odyssey followed in which my EIA co-director,
Dave Currey, and I led investigations into illegal ivory trading in Kenya, Tanzania, Hong Kong, Singapore, Europe, the U.S. and back to Dubai.
In Tanzania, we tracked large shipments of illegally exported ivory to Dubai, Taiwan and Singapore. In South Africa, former high-level military leaders told our investigators how the apar-theid regime’s military promoted trade in poached ivory with Angola and Mozambique to enable their brutal military allies to buy weapons to try to overthrow the governments of these countries.
In Zimbabwe, we obtained detailed evidence of the murder of Sergeant Nleya who, along with 12,000 fellow Zimbabwean soldiers, had been based in Mozambique. Nleya had spoken out against the large-scale poaching by the Zimbabwean military and paid with his life. Nleya was found hanging from a tree outside his military base. EIA discovered that four other Zimbabwean police and wildlife investigators had been killed after discovering high-level involvement by President Mugabe’s military and police operatives in elephant poaching and illegal ivory trade.

In October 1989, EIA released a sensational exposé based on our two years of painstaking undercover investigations around the world. It identified five Chinese syndicates that effectively controlled the global trade in poached ivory with a network that stretched from the boutiques of Hong Kong and Paris to the killing fields of Africa. Our exposé was front-page news around the world; a week later, CITES passed the international ivory ban.

It came just in time. The ivory trade had wiped out half of Africa’s elephants in the previous decade, their population falling from 1.3 million animals in 1979 to around 624,000 in 1988.

After the ban was implemented, elephant poaching virtually collapsed overnight as global markets slammed shut and ivory prices plummeted. For eight years, Africa’s elephants flourished; stability returned to many African nations wrenched by ivory poaching, corruption, and social and political instability that thrived on illegal trading. Then, in 1997, President Robert Mugabe of Zimbabwe hosted the Conference of the Parties to CITES. Along with the governments of South Africa, Botswana and Namibia, he successfully breached the ivory ban by enabling what would supposedly be a one-time sale of southern African ivory stocks to Japan.

Elephant poaching in Africa was kick-started with this signal that ivory was once again “legal” as eager traders and middlemen resurrected poaching teams.

The main destination was China, which, prior to the ivory ban, mainly carved ivory for export. Now, it had become a major consumer of ivory for stamp seals and trinkets, matching Japanese ivory demand. For the second time, EIA had to undertake a dozen investigations, tracking ivory from African syndicates to both China and Japan. One major ivory trader boasted he could legalize poached ivory merely by declaring to Chinese customs that he had forgotten to register tusks before the CITES ivory ban.

In June 2008, EIA obtained a secret document produced by the Chinese government’s top wildlife enforcement officer, who confirmed that 110 tonnes of Chinese ivory — the tusks of 11,000 elephants — had gone missing from government-controlled stocks and that ivory on sale across China was from dubious, likely illegal, origin. CITES sent a three-man team to China to investigate its ivory trade. When I asked the CITES enforcement officer what documentation was provided to demonstrate the legality of ivory on sale in China, he said, “We did not see any documentation. The Chinese officials gave us their word it was legal.” The video and other evidence EIA provided were ignored.

Last July, I watched the delegate from the African nation of Mali, representing 20 other countries from that continent, pleading with the CITES-member countries not to approve China’s application to legally trade ivory. “We have poverty, drought, wars, and our elephants are being poached. If you let China trade ivory, more of our elephants will be poached.”

Their appeals fell on deaf ears as the richest nations in the world and some of the wealthiest conservation groups, such as WWF and Traffic, backed China’s bid. Now, an estimated 23,000 elephants are killed across Africa each year for their ivory, and EIA is scrambling to track resurgent ivory smuggling from Africa to Asia.

If that wasn’t hard enough to take, the ban on commercial killing of whales is also under renewed threat.

President Obama is now on the side of the whales, and Japanese whale-meat eating is passing into history as the older generation passes on. But the Chinese flocking to Africa for natural resources are triggering a fierce onslaught by ivory poachers that has yet to be checked. Fortunately, eBay recently banned ivory sales, and it’s time for the international community to do the same if Africa’s elephants are to survive.

And, with my colleagues from EIA, I will be fighting for the protection and survival of the world’s most magnificent creatures, hoping that the great whales as well as the elephants of Africa will be spared from further destruction.

A version of this article appeared in the June 2009 issue with the headline, “Eco-warrior,” p. 19.